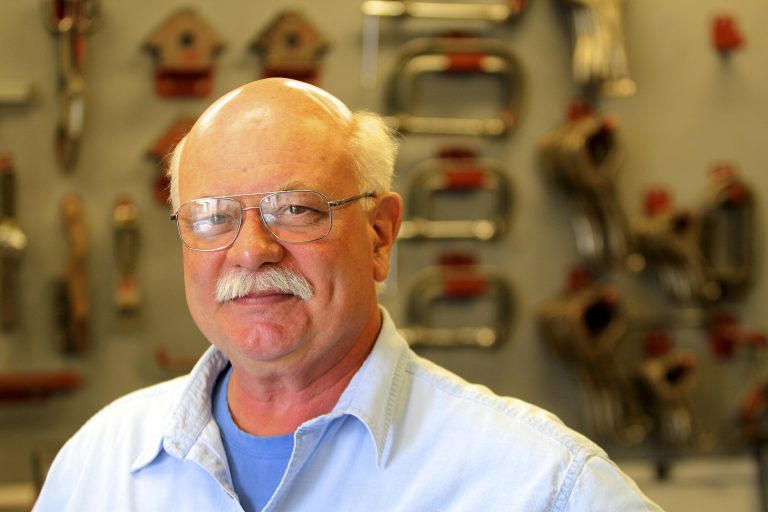 Bruce Tuma, winner of this year’s Mario and Alma Pastega Staff Excellence Award, has completed hundreds projects on the Western Oregon University campus during his lengthy tenure. In fact, as he’s walking around the grounds, it is like a little trip down memory lane because he is reminded of all the work he has accomplished in 30 years with the Physical Plant.

“I look around and it’s like, ‘There’s a little piece of Bruce, and there’s a little piece of Bruce,’” he said with a laugh. Tuma is a welder and metal fabricator, so he’s worked on just about every building on campus both inside and out. The giant welcome sign at the north end of campus? Yep, that’s Tuma’s work. The light balcony in Maple Hall? Him, too. How about the hand rails that flank the iconic Instructional Technology Center stairs? Those are all his doing – and one of his favorite projects.

“Everything we do is a reflection of ourselves. Mine is in the metal fabrication,” Tuma said. “It’s an area that I love. I can progress in it. It’s something I try all my finesse in. ITC is where I’ve done my best work. That hand railing that goes up in the front? That’s all metal finished.”

The ITC building holds a special place in Tuma’s heart for another reason: He was a student there throughout the 1960s when it was the Monmouth Training School and College Elementary School. He was in the third grade there the day of the Columbus Day storm, which toppled the tower on Campbell Hall across the street.

Clearly, Tuma is a homegrown treasure. His mother graduated from the university back in 1965, when it was Oregon College of Education. Tuma’s sister earned a degree WOU in 2000, and his wife—also a Monmouth native—graduated from WOSC in 1993. Tuma himself studied at Chemeketa Community College in Salem. His parents were both educators, but he knew that wasn’t the right fit for him.

“I’m just not the four-year-degree kind of guy,” he said. “So I went to Chemeketa and got certified (as a welder). I went to work in a welding shop for a while and also a logging shop. Then I got the job here. This is the best job I’ve ever had.”

One of Tuma’s many claims to fame on campus is his involvement in the creation of the newest holiday star, which is perched atop WOU’s beloved giant Sequoia every December. An older rendition was too small, Tuma explained, so he and two other Physical Plant workers designed and fabricated the current bauble, which measures 9 feet in width.

“It’s just made of pipe, a string of lights, basic stuff,” he explained. He scoffs at the idea of metalwork as an artistic outlet. “I have a little bit of composition; my parents were the artistic ones,” he said. He’s also a little chagrined that modern technology has taken its toll on the star’s brilliance. “I don’t feel like it shines as brightly as I want because we had to switch to LED lights. But that’s just how things are.”

Tuma plans to be doing his best for the WOU campus community for at least another three years. He’s still happy to come to work each day but is pondering whether the age of 66 as the best time to retire.

“I am very lucky,” he said. “I work in an industrial trade in the middle of a beautiful campus. You can step out and in one minute be out among all these beautiful buildings. I don’t know, I just feel that way.”

The Mario and Alma Pastega Staff Excellence Award honors a classified or administrative staff member who demonstrates exceptional service to the university. Once nominees are received, a screening committee submits a list of finalists to the president, who then chooses the recipient.