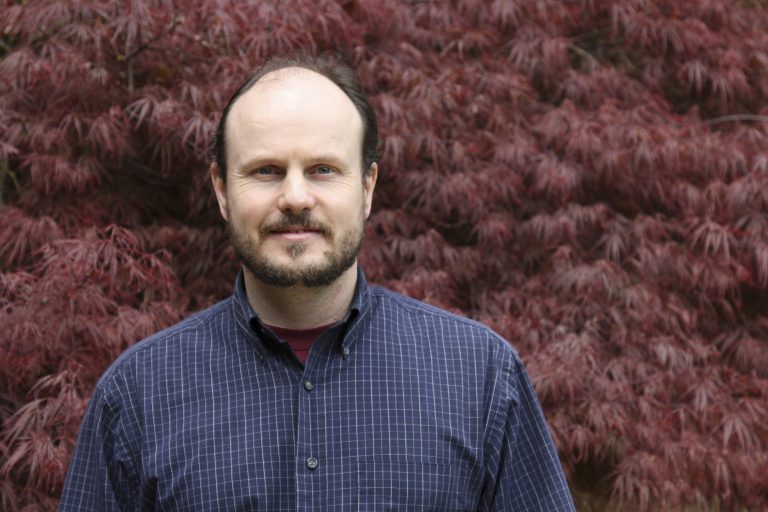 Politics, Policy and Administration Professor Eliot Dickinson is a master of being in the right place at the right time. Opportunities have presented themselves to him throughout his life, and he never hesitated in spotting the opening.

Dickinson, a nine-year member of the WOU faculty, is the winner of the 2017 Mario and Alma Pastega Excellence in Scholarship Award. He points to the publication of his book Globalization and Migration: A World in Motion, which he wrote while on sabbatical in 2015, as the likely reason for the accolade.

During his year away, he was a visiting scholar in the Department of Government at the University of Vienna. There, he had a close-up view of the ongoing refugee crisis in Europe, the very topic of his work in progress.

“It just happened to be the year that a million refugees came to Germany alone, and they passed right through Austria on their way,” he recalled. “So it was really timely and really relevant. Millions of people were fleeing war and trying to make it to Europe, and they were coming right through Vienna.”

In fact, he was living in an immigrant district of Vienna, his wife’s native city. There were so many nationalities represented, he said, that it sometimes didn’t feel like Austria at all.

“We were surrounded by immigrants: people from eastern Europe, the former Yugoslavia, Syria, Iraq, Africa. The whole world was right there. And in the news every day were striking images of people fleeing poverty and war zones in the Middle East and Africa. It was an amazing, dramatic story. I felt like Vienna was on the front line of this refugee crisis.”

He spent a year studying in Bonn, Germany, when it was still the seat of the nation’s government. He later worked in Berlin as a graduate student, interviewing parliamentarians about immigration politics and policy.

Serendipity also might be credited with introducing Dickinson to his wife. Years ago, he landed a faculty development grant to do research on the Camino de Santiago or “Way of St. James,” an epic trek from southern France to northwestern Spain.

“I had always wanted to do it,” he said. “I finally had the time and inclination to just do it. I got a backpack, a sleeping bag, one change of clothes, a good pair of shoes, a journal and a camera and that’s it. Then I walked almost 20 miles a day for six weeks.” He met his future wife, a fellow pilgrim, during the journey.

Destiny aside, Dickinson still had his favorite topic—immigration—on his mind as he traversed the Pyrenees between the two countries.

“The pilgrimage is a migration of sorts,” he said. “It’s an ancient pilgrimage. People were walking across Europe to Santiago centuries ago, and a lot of pilgrims from Germany, France, and Italy just ended up staying in Spain. The Way of St. James, you could say, is kind of like the ultimate migration story.”

It is fitting that Dickinson’s book was published in 2017, when immigration and globalization both are issues at the forefront of political debate. He said his students are more engaged than ever in the topic.

“The students are really into it. They are concerned,” he said. “For some of them, immigration policy affects their lives and their families directly. The contradiction of globalization today is that trade and communication have become easier and easier, but we don’t have free movement of people.”

The Mario and Alma Pastega Award for Excellence in Scholarship honors a full-time faculty member who demonstrates outstanding creative or scholarly accomplishments. Once nominees are received, the Honors Committee votes by secret ballot on whether there will be a recipient that year, and if so, who the recipient will be.