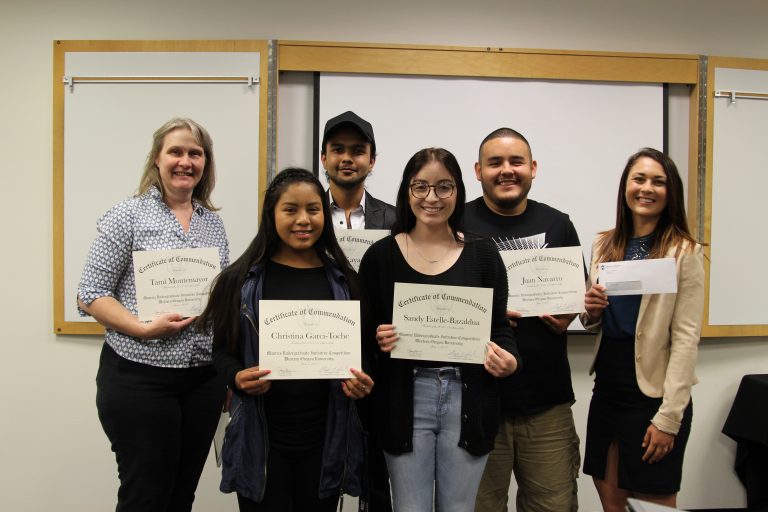 Each year, Western Oregon University undergraduate students have the opportunity to win an unrestricted cash award of $5,000 in a contest known as the Maurice Prize. All they have to do is define a problem, then create and execute an innovative solution.

The goal of the program, from the founders’ point of view, is to support students in broadening their knowledge about themselves and their abilities while learning more about the world. The prize was first awarded at WOU in 2011 and was based on a similar concept Alfred P. Maurice had established in Chicago.

Each year during the Academic Excellence Showcase, student projects are highlighted and a winner is named. Last month, three individuals and two teams learned whether their ambitious projects would earn them $5,000. Here is a look at some of their submissions and what they learned from the process.

The project: The duo worked to provided information and support for high school students would be the first generation in their families to attend college. The focus was primarily on undocumented students and their families, some of which felt intimidated by college and unsure of the best path forward to continue their education. Mendoza and Garcia-Toche produced an informative, dual-language video in which families and students talk about the barriers and successes they found in pursuing higher education. The video can be shared with high school populations to answer questions and support informed conversations.

“I got involved with the competition because I thought we had an important topic that we could work on,” said Mendoza, a McMinnville native who’s majoring in criminal justice and Spanish. “This challenge allowed me to put ideas I had about important current issues and structure them with my partner to create our project. The money was a good motivator at first, but throughout the project we became invested in what we were doing and in making a real impact.”

Both Mendoza and her partner, Garcia, gained valuable insights and skills during the project, including how to establish stronger relationships with their families.

“During the process, I learned that it’s important to have family support and make connections,” said Garcia, a Community Health major from Hood River. “I learned to value education more by interviewing, collecting surveys, and filming WOU students and parents. I also learned to have patience.”

Mendoza echoed the sentiment: “We had many things come up throughout our process, and communication was the biggest skill that was improved. By talking to others, we were able to develop a better sense of what is needed in our community as well.”

The pair offered advice for other students who are considering competing for the Maurice Prize. “Do something that you are passionate about,” said Garcia. “Find a friend who has similar goals and passions and work together. This will help you have someone who motivates you and supports you to complete your project.”

The project: Initially, the team was focused on raising awareness about college resources for undocumented students, specifically those enrolled in DACA. Their vision expanded after the presidential election, when issues of immigration and documentation were again in the spotlight and facing increased scrutiny. Navarro and Bazaldua worked with faculty and staff members to increase understanding about DACA students to create a safe environment in the classroom and the university in general. They created a student speaker panel of DACA students and allies who presented to high schools and the WOU Staff Senate. They collaborated with another campus effort, Alma’s Project, to craft a website comprising resources for prospective or current college students.

Navarro, an Exercise Science major who graduated Saturday, said he’d been thinking about an awareness project for some time and that the news that a prize could result just sweetened the pot.

“One of the administrators told me about this (prize) and how I could enter a competition that’s several months long,” the Stayton native recalled. “She told me that my idea already fits the core meaning of what this competition was about. The money was never the motivator for this. The project would have been going on anyway. This competition just gave my partner and I structured deadlines which helped move it forward a lot.

Navarro and his partner faced an extra complication because a lot of the people involved are undocumented. That added layer of danger was always at the front of Navarro’s mind, but he said it made him work hard to establish relationships with allies who could speak their minds without worrying about deportation. Cooperation was another key skill he learned along the way.

“We learned teamwork,” he said. “The two of us each had skill sets in different areas, and we pooled our resources together and also adapted to each other’s learning styles. This made the project more efficient because we just understood each other well.”

Tami Montemayor: CaN, Church and Neighborhood

The project: Montemayor sought to coordinate services for children that were provided by an array of groups in Salem. She worked with schools, churches, nonprofit organizations and faith-based communities to maximize communication and resources dedicated to helping kids in the community. What started as a potluck meeting quickly grew to include spin-off events such as a motivational assembly for middle school students, Trauma Informed Training for another agency and the discovery of grant funds to further the cause.

Montemayor said she got involved in the challenge because she wanted to make a greater impact with an organization she admired, Salem Leadership Foundation.

“My idea is basically building collective impact between the churches in a neighborhood and the CaN Center as outreach to strengthen the families who live there,” the Salem native said.

Montemayor was particularly proud of the middle school assembly, for which she partnered with a professor at Chemeketa Community College. She is looking for funding to continue the presentations next year in middle and high school.

“The message centers around how the circumstances we find ourselves in now don’t define who we become. It’s about the choices we make now,” she said.

The Early Childhood Education major didn’t win the prize, but she found value in the challenge and advises other students to take it on. “I am so proud of myself for just finishing the race,” she said. “Connect with your adviser for help. My adviser guided my vision to a higher level.”
Ranjit Kayastha: Bridges in Nepal

The project: Kayastha’s project was to create a solution for a problem in Nepal, where school children have to cross a river each day by progressing hand-over-hand on a suspended cable, dangling treacherously over the water. He wanted to build a bridge to smooth the children’s path to school. He proposed building a suspension bridge, and his effort to get it built included two visits to Nepal, coordination with local villages, a campaign to convince the Nepalese government and coordination with various NGOs and nonprofit organizations.

The project: Bek, a Health and Exercise Science major, noted that there was no instructional information available in the Peter Courtney Health and Wellness Center that indicated how the workout machines should be used. Nor were their guidelines for developing a good exercise routine. She felt this was a barrier to students working out. Her solution was to propose a part-time fitness specialist who could help students learn to use the machines and who could create a customized workout plan. Her proposal mitigates budgetary and liability concerns, and she created a training manual that can be used at WOU and other universities.

Like Navarro, Bek was already moving forward with her effort before she learned about the Maurice Prize. “It gave me a reason to pursue this project that I felt so passionately about,” she said.

Bek got a lot of real-life business management experience during her project journey, discovering the nuances of bureaucracy and regulations.

“I learned a lot about liability and business,” the recent Exercise Science grad said. “This project taught me why our school does not currently have a personal trainer. There was so much more than just hiring employees that goes into implementing a brand new position. I also learned what it takes in a professional setting to implement a new project. I learned how to propose an idea and the communication it takes to get it through to the next step.”

Bek encourages other Maurice Prize contestants to make sure they choose a topic they are deeply interested in. “Find something that you love doing so much that even if it does not follow through, it does not feel like a waste of time.”

Want to learn more about the Maurice Undergraduate Initiative? Check out the challenge’s website.

Have you undertaken a major project for the betterment of your community? We’d love to hear about it!