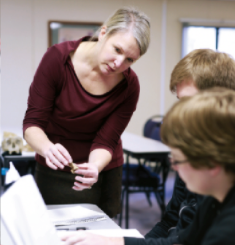 Western Oregon University Associate Professor Misty Weitzel has a box of full bones in the corner of her office in Maaske Hall. A skull sits on the bookshelf, and skeletal “face” peers at guests from a pillow. It’s not gruesome, though. They are just tools of her trade.

Weitzel teaches forensic anthropology, which harnesses the principles of anthropology in the field of crime analysis. She said most people become familiar with the concept by watching the TV show Bones, which is based on the writings of real-life forensic anthropologist and show producer Kathy Reichs. However, she’s quick to assure students that reality is far from entertainment.

“Every term, I have at least one student who says that was their inspiration,” Weitzel said. “They fully admit they watch Bones. They love it, and that’s what they want to do. Part of my job in the introductory course is to say, ‘Hey, that’s great. It’s really important to have popular media that addresses what we do. But let’s dismantle that right now. This is a science. You will be doing the mundane and the tedious and all the work that you imagine might come with science. You’re not going to come into the dark room with your stilettos and flashlight.’ ”

Despite her anti-sales pitch, Weitzel’s classes – and the forensic anthropology minor program – continue to popular among students. She said some indicate they came WOU or transferred here specifically because they wanted to learn about the field. WOU’s program, which started as a single class, now includes four core courses and several electives. Weitzel teaches many of them.

“One example of an elective is Social Constructions of Race,” she explained. “In it, we trace concepts of race using biological anthropology as the lens by which we understand race, which doesn’t actually exist. You know, the myth of race.”

Most of the students who pursue a minor in forensic anthropology are either criminal justice majors or anthropology majors, though the program can pair nicely with a “hard science” major such as chemistry or physics. The 300- and 400-level courses are rigorous, with a lot of minutiae to digest.

“The hardest class is osteology because we are learning the human skeleton,” Weitzel said. “It’s anatomy. It’s a lot of memorization. You need to be able to identify bones and features of bones and identify bones from their fragments. But everyone can do it.”

The most popular – and perhaps the most discussed – aspect of Weitzel’s courses are the hand-on adventures, when students put the skills they’ve learned to work. In one scenario, the associate professor finds an area of campus to scatter bones and other evidence that students search for, find and analyze. Another course involves teams being assigned their own skeleton, and they spend the term drawing conclusions based on their examination of the bones. It culminates when they each write a forensic report about their skinny companion, just as they might on a job.

Perhaps the most epic experience was when Weitzel took students to a remote, forested hillside outside Philomath, where 11 years earlier she’d buried three pig bodies and left three more in cages on the ground as a set-up for future research.

“(By now) they are decomposed and skeletonized,” she said. “I took my class up there to do a recovery exercise. Two of the pigs that were buried, (the students) got to map and look for the features we’d been talking about: How would you recognize this as a burial? What are the vegetation changes, the soil changes? Then they excavated the body using all the archaeological methods we would use if we were exhuming a body that was found somewhere.” The lesson was captured by OPB and ran as part of Earthfix.

The students so enjoyed the adventure that they told others about it. But when the class rolled around again this year, complicated logistics prevented a repeat.

“We tried to get up there and couldn’t,” she said. “I think they were kind of bummed about it. They like getting out there because where else are you going to get the skills to really do this stuff? It’s very different than just reading about it or watching it on TV.”

Weitzel said she is careful to paint a realistic picture of job prospects in the forensic anthropology field to students who really are passionate about it. There’s only one person working for the state of Oregon with that job title, and she only does it one day per week, Weitzel said. Students will likely need to travel out of state to pursue a master’s program, which is a barrier for many.

“You are not going to get your degree in Oregon and stay in Oregon and get a job,” she said. “I can think of two students (who were dedicated to continuing in the field). They both went to grad school in Scotland. Especially for students who want to work in a crime lab, for their master’s they should be doing hard science.”

Weitzel herself feels as though she won the lottery to be working full time in forensic anthropology. She took a circuitous path to the position, and she said that being open to changes in her plans allowed her to end up where she is.

The Sandy native enrolled in Oregon State University as an apparel design major. She took an anthropology class about Pacific Islanders taught by a quirky professor, and her interest was piqued. She went on to take more courses, drawn by the idea of traveling and exploring different cultures. After she got her bachelor’s degree in anthropology, she served in the African nation of Burundi for the Peace Corps.

Although she wasn’t initially drawn to teaching, she figured that career path was probably inevitable.

“I knew when I was done with school that I’d have to get a job,” she said with a laugh. “Teaching was an evolution because that was not my calling. Now, I love it.”

She served as an adjunct professor at both OSU and WOU for 10 years before finally taking a full-time position in the Criminal Justice Department at WOU in 2011. She’s happy to be here.

“Western Oregon has its own appeal,” she said. “Being a small school, that’s very attractive. I’ve traveled to Siberia, Cyprus, Africa and all over the place, but I still pick Oregon as the best place on Earth. Even though working in Cyprus was pretty sweet.”