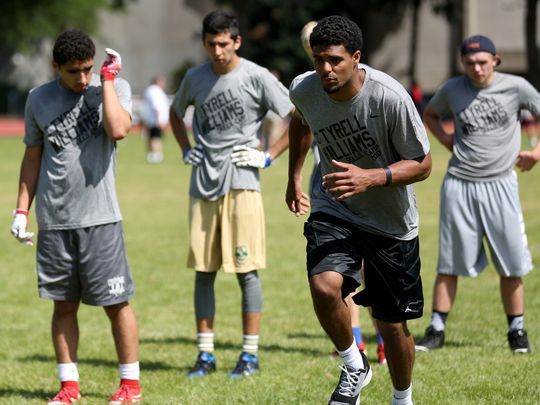 Tyrell Williams’ journey to the NFL is a feel-good story from the Mid-Valley.

The former standout at Cascade High School and Western Oregon University went undrafted in 2015, but the San Diego Chargers signed him and gave him a shot, and he made the most of it.

Williams led the Chargers with 1,059 receiving yards last season, his second in the NFL, and he scored seven touchdowns.

This is a season of transition for Williams and the Chargers as the team moves from San Diego to Los Angeles.

But even with a busy schedule that comes with being an NFL player, Williams makes time to give back to the community that supported him growing up.

On Thursday, Williams hosted a free football skills camp at Western Oregon, drawing about 150 kids from across the Mid-Valley.

“The main goal was to bring something back so they don’t have to go all the way to Portland or out of state to go to one of these top camps,” Williams said. “I just wanted to come back to a small town, where I’m from and give them something to work on, something to see and have a good time..”

The camp was for quarterbacks, running backs, wide receivers and tight ends in seventh through 12th grade.

“It was really fun. The running backs worked on routes and handoffs, and it was all just really fun,” said Jacob Bell, an incoming seventh-grader at Cascade Junior High who plays running back. “It was really cool. I got a picture with him, and he signed my football, and wrote ‘Go Cougs.’”

“I thought it was really good for the Oregon community. I met a lot of players that know me from games, and we started talking,” said Isael Garcia, an incoming senior at Woodburn High School. “It started out that everyone was in it for themselves, but as we started getting through the day, as the second session started, we were all having a fun time. For Tyrell coming out for all these younger kids who are still looking for a role model in their life, I think it was a good thing for them.”

Williams spends most of his time training in San Diego for the upcoming season, and he gets back to the Mid-Valley when he gets a chance.

“We just got done with minicamp. I’m still in San Diego, just training on my own with some guys that come into town. Just trying to get ready for the next season, really,” he said. “Whenever I come back home, I try to make sure to do something in the community. I try to make sure that’s a big emphasis for me.”

With the Chargers’ relocation, Williams has already found a new place to live in Los Angeles, and the team has begun efforts to reach out to fans in the new market.

“I got my spot last week. I’m still in San Diego training, but once training camp starts at the end of July, I’ll be up there,” Williams said. “In January or so, we started going out there and doing some community stuff and trying to get in front of them. It’s been a slow, gradual process, but I think it’s going well so far.”

During his rookie season in 2015, Williams played in seven games, catching two passes for 90 yards and one touchdown.

He took a significant step forward last season, finishing with a team-high 69 catches. And he’s still looking to improve this season.

“It’s just been a confidence thing,” Williams said. “I always knew I was capable, I was just waiting for the opportunity. When I got the opportunity, I put everything I had into it to make it happen. I still have a lot to improve on, so I’m just trying to come into the season and build on it.”