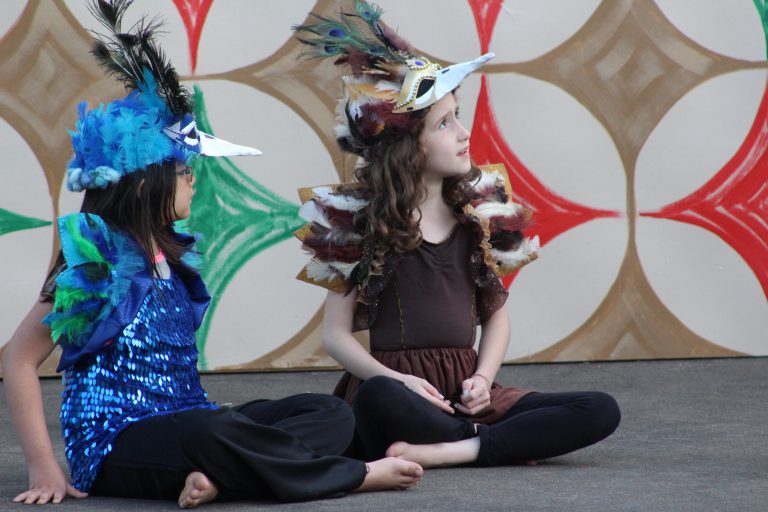 Anderson, an adjunct writing and English instructor at Western Oregon University, based the play on the classic tale One Thousand and One Nights, in which Scheherazade marries Shahryar and has to entertain him with stories to prevent him killing her in the morning. She spins three yarns: Adventures of Al-a-din and the Treasure Cave, Son of Adam and The Hunchback. Confusion and comedy are the common veins that run through the trio of plays within a play.

The large cast has been rehearsing for weeks, preparing on a condensed schedule made necessary by the extra-long school year. Still, the kids are excited to don their elaborate costumes and present Anderson’s adaptation to the audience. Her own daughters, Colleen and Vivienne – who’s “6 and a half, to be exact” — play a duck and a horse in the production.

Arabian Nights is not Anderson’s first project with the Apple Box Children’s Theater. She also adapted Shakespeare’s A Midsummer Night’s Dream a few years ago, at the request of theater co-director Barbara Harriman.

“She walked up to me and said ‘You should write a play for us,’” Anderson recalled. “And I said ‘OK. Yeah, I’ll write a play. That will be great.’ Then we had to figure out which one to do.”

The children found Shakespearean language, which Anderson modified but didn’t completely subdue, pretty demanding, but they rose to the challenge, she said.

Apple Box prefers to perform classic tales, following its motto of “big stories for little actors.” The children are largely from Monmouth and Independence, and they range in age from about 4 to 14. Some prefer not to have lines, while others are ready for the limelight. Parents handle the props, costumes and other elements of the production.

Several families with ties to WOU are involved, including the Winninghams, McCannells and Beavers.

For Anderson, who started teaching at WOU in the fall of 2002, writing plays for both children and adults has been a lifelong passion. She may teach the basics of literature and writing, but she describes herself as a creative writer at heart. Anderson holds two master’s degrees – in literature and in teaching writing – but didn’t feel the tenure-track life was not the right choice for her.

“What I really wanted to do was more creative writing, and I could do that and teach without going to school longer. So that was the right decision for me,” she explained.

Her first major work was a play she completed during her sophomore or junior year at Mt. Holyoke in Massachusetts. She entered it in a five-college contest and won, so she got to see Remote Control come alive on the stage.

“It was neat to see that performed,” she said. “When you write a play, and then suddenly your characters are alive and they are up there walking and talking in front of you, it’s really awesome. Because it never happens otherwise; if you’re reading your own book, it’s in your head. But this is different, they are like alive now.”

She also has several works of fiction in her catalog. Fuzzy Logic, a romance set on an alpaca farm, was published in 2015. Anderson’s family cares for 18 alpacas on their property.

“I pitch it as Bridget Jones’ Diary on an alpaca farm,” Anderson said with a laugh. “I can totally see the screenplay for this one.”

In 2016 came Closing the Store, in which a woman running for president of a fictional nation advocates a sex strike in order to end a war. Anderson said the premise is based on Aristophanes’ comedy Lysistrata.

“I like adapting things,” she explained. Another case in point: Her current project is a take on the myth of Lilith, who was Adam’s first wife before being banished from the Garden of Eden for a lack of subservience. Anderson has crafted two drafts of the manuscript and rejected both because her character is not “badass” enough.

“The character keeps telling me that,” Anderson said. “She says ‘You are not doing me justice.’ I’m just going to start over from scratch.”

In addition to her novels, Anderson has published one grammar book and has another in the works. She and former WOU instructor Kate Ristau cowrote Commas: An Irreverent Primer after growing frustrated that students wouldn’t read traditional grammar texts.

“We wrote a comma book with grumpy unicorns and grammar dragons and elves that bite your fingers,” she said. “So at least you are entertained while you are reading it. At least they read it. If they were engaged, they were able to retain some of it. So it helped.”

She envisions her next guide as a “choose your own adventure” approach to learning grammar rules.

“It’s like a video game. You can only level up once you’ve learned the previous rules,” she said.

Anderson anticipates working on the Lilith book and the grammar guide over the summer while her children are at camp. Until then, she’s focused on this week’s productions of Arabian Nights. She’s been attending rehearsals since Memorial Day, tweaking the play to have more lines or removing scenes that weren’t working.

Having the playwright on site has been advantageous for director Rob Harriman, she suspects.

“They ask me a lot about how I envisioned something when I was writing,” she said. “I have things like a flying castle, and they want to know how I thought that would happen.”

The play opens tonight and runs Friday and Saturday as well. Admission is free and open to everyone. The show starts at 7 p.m. at the amphitheater outside Rice Auditorium at the corner of Powell and Knox in Monmouth. Chairs or blankets are advised, as the floor of the theater is concrete.