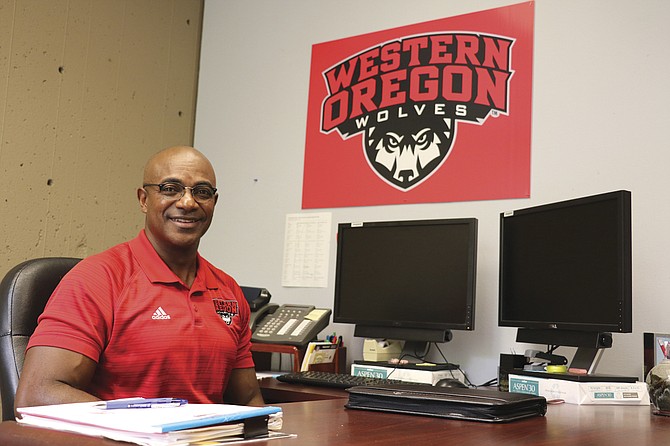 Born on the East Coast, Campbell had only been as far west as Illinois.

Yet, when Western Oregon University began its search for a new director of athletics, Campbell was interested.

“My wife and I have always wanted to live on the West Coast because we haven’t before,” Campbell said. “We saw that as a new opportunity and was something that was more intriguing about the position. I’ve spent a lot of time in the South and East. I saw living on the West as a positive.”

“I saw that the athletic program was competitive,” Campbell said. “It seemed to have a good structure in place. I was really impressed with President Fuller and his vision for athletics and for the university. That was the biggest selling point for me. I thought that this is a place I’d like to be to help with his vision for athletics.”

Fuller came away equally impressed and, on July 5, Campbell officially began his tenure as athletic director.

For a while, it appeared Campbell’s career was headed in a different direction.

“My undergraduate degree was in social work,” he said. “I did that for probably about 10 years, but I knew that I needed to get a master’s degree in order to get where I wanted to go.”

It was rewarding work — but difficult.

“Anyone who has done any research in social work knows you can get caught up and burnt out because you see the plight of a lot of people, and it can be very taxing,” Campbell said. “I started thinking, ‘Where do I want to specialize in?’”

It didn’t take long for Campbell to decide.

“I thought back to the places I enjoyed the most,” he said. “I love being on a college campus. I enjoy the environment being on a campus. I wanted to work in higher education. Then, it was a matter of what area do you want to work in? I always liked athletics and thought it would be a good place to work.”

Upon graduating, he received a job offer — just not the one he was looking for.

“My first job as a full-time professional was as a residence director at Virginia Tech,” Campbell said. “I kept sending out resumes and applying for athletic jobs.”

Campbell would get his shot working with an athletics department at the University of Minnesota in 2000.

“It was my first job (in college athletics), so I was real excited,” Campbell said. “To start out with a program that had around 750 student-athletes, it was a great opportunity.”

At the time, Minnesota had two separate athletic departments for men’s and women’s sports.

Campbell, who worked in the Academic Counseling and Student Services section, was one of two units that worked with both departments.

“I didn’t realize how unique that was at the time,” he said. “But it was a great place to learn, a great place to see how they do things at that level. It prepared me for when the time came for me to look at other opportunities.”

Since then, he has served as athletic director at numerous locations, most recently at Tuskegee University in Alabama.

Now, he’s ready for a new challenge in Monmouth.

“I feel that we have two primary responsibilities in athletics,” he said. “We want to graduate students and win championships. Everything we do here should be working toward one of those goals.”

For now, he’s learning the department’s strengths and weaknesses and plans to meet with every coach and staff member within the department on an individual basis.

“You never want to come in and make a lot of changes right off the bat,” Campbell said. “Through these sit-downs, I will find out about their area and what’s going on. If I hear a consistent thing from each of the coaches that something doesn’t work, for example, you can see that something is broken and, through these meetings, I can figure out what should be priority one.”

Once he does that, the focus will shift toward creating and executing plans to address those priorities.

“I’m excited to be here and I look forward to meeting the alums, the fans in the community, and anyone who is willing to help our program,” he said. “I plan to go out and get in front of as many people as I can to tell the story of WOU athletics and get support for our programs.”