Home » Alumni » Business & global affairs » WOU in the news » WOU in the News: Vancouver Creator Could Tap Into Booming Board Game Industry 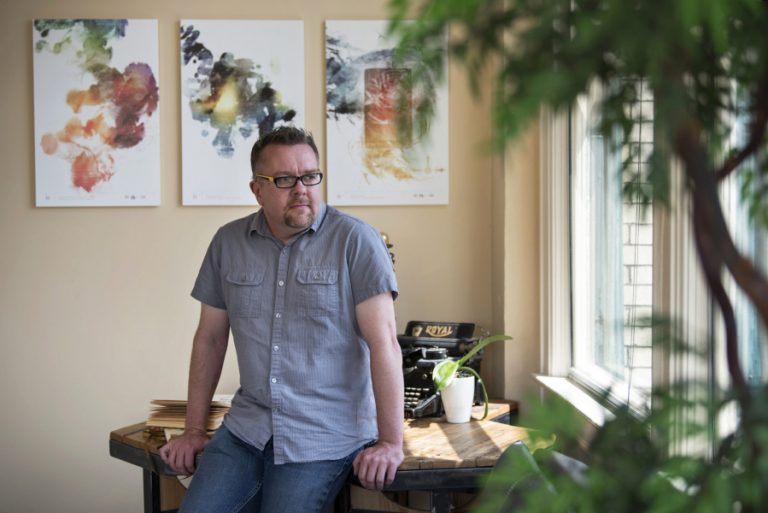 After saying for years he wanted to invent a board game, Marc Neidlinger finally decided it was time to roll the dice.

“I said to myself, if I don’t do it now, I never will,” the Vancouver resident said. “If I don’t do it today, when? If you can’t answer that, it means it’s never going to happen. I’ll go to my grave never making a board game.”

That was two years ago. His game, Epoch: The Awakening, appeared on the online crowdfunding website Kickstarter this week and reached its goal of $30,000 in contributions within 24 hours. Neidlinger said the day was “pretty overwhelming.”

“I hope it inspires other people to do the same thing — if they want to start their own business or write that book or something,” he said. “Maybe they decide to start that book. That’s the heart of what I’m trying to do.”

Besides inspiring the masses, Neidlinger is well on his way to raising about $60,000 in contributions before hitting the market, he said. The game will retail for close to $70.

Epoch: The Awakening pits players in the role of a scoundrel looking to atone for his past. Players crusade across a hexagonal game board, winning companions, items and boosts to their heroes’ constitutions.

Its gameplay is steeped in traditional, high fantasy. Players roll a die, and are then battling monsters or wielding magic. If the spectrum stretches from Candy Land to Dungeons & Dragons, the game falls much closer to the latter.

“It’s a heavy game, it’s got some depth to it,” Neidlinger said. “This is a game for people who enjoy deep, high-strategy board games.”

Bringing the idea from the drawing board into a working prototype was a journey unto its own, Neidlinger said.

As a longtime player of tabletop games, Neidlinger said he had been toying with this idea for over a decade. Once he decided to pursue it, he enlisted hundreds of fellow board game fans to flesh out rules to make it unique and fun.

Paid staff members for Epoch’s development included a sculptor in Portugal, more than a dozen illustrators scattered around the world, and an Australian voice actor.

Neidlinger, a Portland native, studied graphic design at Western Oregon University. He moved to Vancouver 17 years ago when he founded his first digital marketing firm, which has since been sold and succeeded by his new company Blue Blazes.

Blue Blazes in downtown Vancouver has clients in various industries in Portland, Vancouver and as far away as Manhattan. A sister company Orange Nebula, also headed by Neidlinger, made Epoch.

Neidlinger said his background in marketing and graphic design played a big role in making the game a reality.

“I was able to leverage my experience in branding, graphic design and storytelling to execute the Kickstarter (campaign) and market the game,” he said. “Designing the game was a brand new venture and I had to start from ground zero.”

The actual Kickstarter page is loaded with artwork, instructional videos and pictures of prototypes. It offers different tiers of rewards based on the amount of money a contributor can kick in. It even features a prologue that details the game’s backstory, narrated by the Australian voice actor.

Neidlinger declined to say how much he invested in the project because he didn’t expect to make a lot of profit, but he didn’t mind.

“It’s not about the money. I would love for it to fund well and recoup what I’ve dropped into it,” he said.

By Thursday afternoon, contributors on Kickstarter had donated $38,000.

With Epoch, Neidlinger is following a well-trodden path in a quietly powerful industry.

According to New York-based market research firm NPD Group, the board game industry grew by 28 percent last year. As reported by Adweek, global sales last year racked up $9.6 billion, up from $9.3 billion in 2013.

The genre’s superstars — besides the classics of Monopoly or Clue — include names such as Cards Against Humanity or Exploding Kittens. Those games also got their starts on Kickstarter.

The industry has grown largely as a backlash of modern game culture, Neidlinger said. Board games are like an asylum from the sorts of games that have people glued to the screen, which Neidlinger called “overkill for the senses.”

“In a highly digital culture like ours, where you’re so connected to your devices and your phone, people just want to relax and bring the board game out. It’s very analog,” he said.

That trend has grown with the millennial generation and the growing popularity of a game such as Settlers of Catan, which was created over 20 years ago. Neidlinger calls Settlers a “gateway game” that leads many people into his world.

“That’s between a family game, a party game and the sort of hardcore game,” he said. “It’s fun, a lot of people love that game.”

All that being said, he doesn’t assume Epoch will be a smashing success. He said he’s been approached by three companies already who want to help distribute, but he’s staying cautiously optimistic.

“I probably won’t make very much money on this one. My next game might go higher,” he said.

By Troy Brynelson
The Columbian