Home » Sports & recreation » WOU in the news » WOU in the News: More than Xs and Os: Sports Camp Teaches Youth How to Improve Off-Field Training 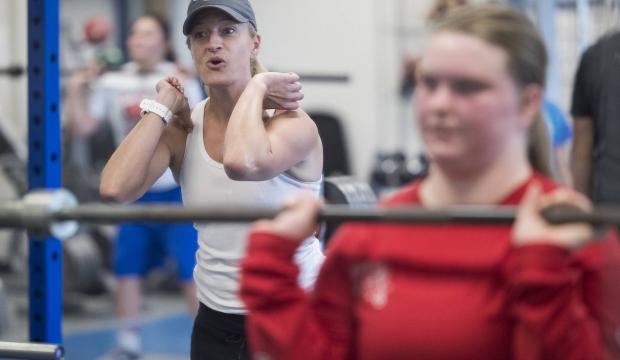 Five girls hoisted Olympic barbells to the instruction of coach Cori Metzger in the Thunder Mountain High School weight room on Tuesday. The school was empty save for Metzger and her group, each learning the basics of powerlifting.

“One more time: down to your knees, up and shrug,” Metzger said. Each girl extended at the ankle, knee and hip, moving in a jumping motion from a half-squat to on their toes. At the end of the motion, the girls held their shoulders high, the 45-pound bar dangling at their hips.

All of them came to Metzger’s inaugural Juneau Football and Sports Performance Camp to learn how to use their time at the track, in the gym and at the dinner table to improve their abilities on the court and field.

The group of athletes — some soccer players, others basketball or softball — executed the first two steps toward completing a full hang clean, an Olympic lift meant to improve their jumping ability and overall power.

The moves are referred to as the “pull” and the “high pull.”

“It’s a triple extension. So your ankle, knee and hip. Because if you try to jump and you’re not extended, you’re not maximizing your power, you’re not getting your glutes,” in on the action, Metzger explained.

Once extended fully on their toes, the girls had to break their elbows and flip the bar onto their shoulders, called the “catch.” It’s the trickiest part.

She gives this same instruction to every player on the 13 Division II teams she trains at Western Oregon University, where she’s the Director of Sports Performance. She’s one of only 15 female strength and conditioning coaches at NCAA schools and one of only four who work with football players.

With freshmen players, she has to break down lifting technique, always starting with just a bar or sometimes a wooden dowel to make sure every athlete is lifting properly and safely.

“It doesn’t matter if you’re doing body weight or just the bar or if you’re lifting 350 pounds: if your technique is bad, you run the risk of injuries and not getting full range of motion,” Metzger said.

Metzger teamed up with former WOU coach Kimo Von Oelhoffen and the TMHS football team to put on the camp. A product of Juneau and a certified master strength coach, Metzger has long dreamed of sharing what she’s learned with the Juneau community.

Sports science has improved leaps and bounds in the last 20 years. When Metzger started, it was all just about the weight room, not nutrition, mobility or sleep.

Coaches now know that, in order to get the best out of their athletes, performance has to be taken into account with every decision made. With Metzger in charge of off-field training, WOU takes a holistic approach.

Basically, she teaches athletes how to best use their bodies. The teams she instructs may be different, but many of the mechanics are the same: running, jumping, landing, cutting, getting injured and recovering.

She said this holistic approach to athletics hasn’t yet trickled down to younger generations. There’s a misconception that working out can be bad for kids, or that all you need to improve is more time with the ball, the bat or the racket.

But Metzger said if done properly, only adding weight at the appropriate age, the working out will help prevent injuries, not cause them.

Metzger’s tutelage is something her athletes attested to. She asked four of her most dedicated football players to coach at the camp for her. One of them is former Juneau-Douglas High School quarterback Phillip Fenumiai, who now starts for WOU and will complete a business degree in the spring.

Fenumiai was already a weightlifter when he made it to WOU. His father, Al Fenumiai, is a lifelong powerlifter who helped his son learn the basics when his body matured enough to handle weight safely. Al even helped Metzger with her squat form when she saw him at the gym recently in Juneau.

Even with a solid background in weightlifting, Phillip says he’s gained 20 pounds of muscle in the past four years under Metzger’s coaching. He’s only gotten faster, too.

“She’s helped me transform into a better athlete than I would have on my own,” Fenumiai said. “I knew how to lift, but she’s taught me a lot of other stuff I didn’t know. … A lot of things that helped me realize there’s more to working out than lifting a lot of weight.”

WOU wide receiver Keoni Piceno, who, along with linebacker Tyler Johnson and wide receiver Paul Revis, rounded out the quartet of WOU players who came up for the camp, said there’s a joke on the team that they’re “more scared of Metzger than we are our actual coaches.” She said she’s slowly trying to recruit each of these guys to become strength and conditioning coaches themselves.

A door away from the weight room, in the TMHS auxiliary gym, some younger students ran through a gauntlet of body weight and medicine ball exercises. A pair took turns making waves with a heavy rope, with Fenumiai exhorting them to “hulk smash” the rope on the ground.

TMHS football coach Randy Quinto said he was delighted to have his summer camp in Juneau this year. It saved his team tons of money while providing them with high-quality instruction.

Since he took over the Falcons head coach position three years ago, he’s been trying to build a team culture that sees the football as a year-round sport, something Metzger and her budding strength coaches can help with.