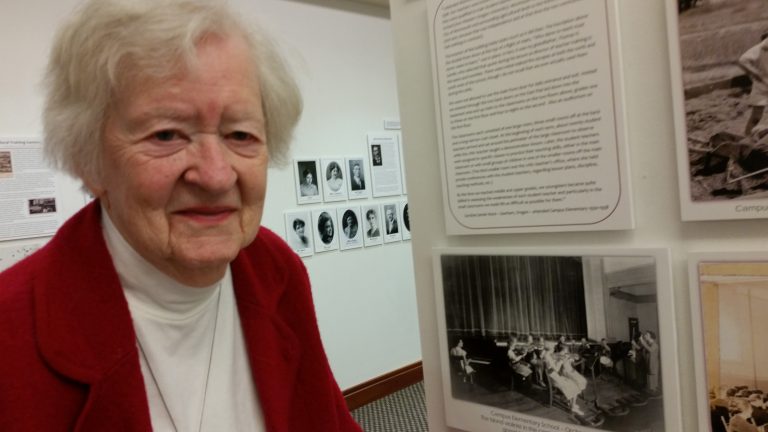 When your last name is Gentle and you live on a farm at the edge of campus, there’s little question which college you will attend. And in 1939, that was just fine with Margaret Gentle.

“I knew I was going to go there,” she said with a laugh. “It couldn’t be anything else, in this family.”

From the farmhouse at 879 Monmouth Ave. N, she walked to classes at the university, which was Oregon Normal School that year, just as she had trekked to Monmouth Training School and Monmouth High School. By the time she graduated from Oregon College of Education, a name change that transpired while she was there, she’d earned a teaching certificate and met her future husband, Joseph Hall.

“We met in Miss Arbuthnot’s geography class” Margaret, now 96, recalled. “She sat us in alphabetical order, so I was right next to Joe.”

Margaret is the quintessential Monmouth girl, the granddaughter of Thomas and Carrie Gentle, Illinois natives recruited in 1911 to work at the recently re-opened Oregon Normal School. In 1914, Thomas and Carrie moved into the home at 855 Monmouth Ave. N — which we now know as Historic Gentle House — and created Gentleacres, a farm encompassing myriad acres on the outskirts of campus.

Margaret’s father, James Gentle, was the oldest of the Gentle children. He and his wife, Olive, had Margaret and her younger sister, Caroline, in the years following World War I. James and Thomas worked the farm, raising dairy cows and growing crops. They grew an extensive vegetable garden, and Margaret got a reputation as a champion carrot thinner (she scoffs at the honor today).

Family celebrations brought all the family together in Gentle House. “We always had Christmas over there,” Margaret said. A quilt that she made as a teen is still on display in one of the upstairs front rooms.

Because both Thomas and Carrie were teachers, education and learning were always an integral part of family activities. Both generations placed a high value on learning new skills and raising the grandchildren in an environment that fostered education and discovery. It’s a tradition that Margaret and Joe would later observe with their own children.

As youths, Margaret and her sister attended Monmouth Training School, which was both an elementary school on campus and a training ground for college students earning their teaching certificates. It was housed in what is now the Instructional Technology Center (ITC). A photograph of Margaret playing the violin shows the music ensemble performing in an auditorium recognizable as ITC Room 211.

When Margaret graduated from Monmouth High School, located where Rice Auditorium is today, in 1939, the Gentle contingent appeared once again in force. Thomas Gentle gave the commencement speech, and James Gentle handed out the diplomas.

Looking back, Margaret said she doesn’t recall getting frustrated that family was always around. “There was no alternative,” she said, smiling.

When she met Joseph Hall, a native of The Dalles, during her time at college, it was clear she’d found a kindred spirit who shared her appreciation for education and community involvement. She described those few university years as focused and purposeful.

“We had such great teachers,” she said. “They were just so kind to us. Perhaps it was because of my grandfather being there, too. It was a fun experience. There wasn’t much partying. It seemed like everyone was anxious to get to know something, and the teachers were anxious to see that we did.”

Because her family farm was so close, Margaret didn’t dally on campus. Clubs and campus activities weren’t really on her radar.

“I lived right here, and I walked home every day,” she explained. “I didn’t have any dorm experience. We had dances in the gym. That was about it.”

She and Joe graduated OCE in 1941 and were married in June of 1942, just six months after the United States had entered World War II. Joe got a medical exemption from military service, and the couple hit started the first leg of what would be a lifetime journey of travel.

They both got teaching jobs in the Portland area first, and Joe eventually took a position as principal. The next stop was California, where Joe earned his master’s degree at Stanford University. The couple spent a few years in Palo Alto before crossing the country for stints in Cambridge, Mass., and Orono, Maine, where Margaret earned her bachelor’s degree in art at the University of Maine.

Having come from a small, rural town, Margaret loved exploring the nation’s cities and experiencing new things with her husband. But not every town was her cup of tea, she said.

“I loved Maine. I liked the weather, and I liked the people,” she said. “The people were so good to us. Massachusetts was too crowded. It was hard to live there. I wasn’t used to that, coming from here.”

Still, she was content to travel the country with Joe, and they both found employment in each new locale.

“Every time we moved, I got a job,” Margaret said. “I didn’t care (about moving a lot). I was happy to go with him wherever he went.”

In 1949, the couple returned to the Mid-Willamette Valley and built a house on 25th Street NE in Salem. Joe, who enjoyed architecture a great deal, designed the home. Margaret still speaks with pride about the house’s innovation.

“It was the first redwood modern house in Salem,” she said. “It had a wall of windows and was sort of a backward house because the garage is in front and you can’t see the main part from the street.” The home was featured in Sunset magazine, she recalled.

The Halls spent 12 years in Salem. Joe worked for the state Department of Education as the curriculum director. Two Hall children, Steven and Madeline, joined the family and started school. Joe got his doctoral degree from Harvard, with help from Margaret, who lent him her artistic talents in an era with no color copiers.

“His dissertation was about textbook distribution,” she said. “I painted all the maps.”

Although it was not long before the newly expanded family started traveling once again, having the children made it more of an adventure. In preparation for their next trip across the country to New York, Margaret sewed pockets to hang on the back of the front row of car seats so Steven and Madeline could have their distractions within arm’s reach to prevent them from fighting. In another burst of innovation, the Halls also had seat belts installed in the car for the trip.

New York was like a dream vacation, as Madeline Hall Fisher recalled [Madeline and her husband continue to maintain the Gentleacres Century Farm]. The family, still focused on education and always seeking learning opportunities, attended museums and operas but went camping as well. Margaret led a Girl Scout troop and raised a vegetable garden. She remembers the house from those days in particular.

“I remember this big house we bought,” she said. “It had four bedrooms. And it also had a maid’s room and two staircases. We didn’t have a maid. I was the maid.” When they built a wall to create a study for Joe, the children were involved in the process, learning about construction as they went.

After New York, the family headed to Illinois. They stayed a while in Glencoe before moving to Chicago. There, they lived in a “three-flat”; the Halls lived on the middle floor while renting out the top and the bottom floor to other families. Joe worked for AJ Nystrom, a company that made educational tools – globes, maps, anatomical models – while Margaret found work with a needlecraft manufacturer, a job she enjoyed a great deal and her first that was not teaching-related.

“I supervised the ladies who made the samples of the kits,” she explained. “I read every stitch to be sure they did them all right. It was fun. I enjoyed it very much. I always liked to sew. It was kind of a learning situation.”

By this time, both the Hall children were in college. Margaret still made periodic trips back to Monmouth to visit her family and spend time at the farm. For many years, Joe and Margaret maintained an extensive newsletter for graduates of the OCE class of 1941, with updates through the years on many of the students.

In 1981, the Halls were instrumental in the transfer of Historic Gentle House into Foundation hands according to the wishes of Catharine Gentle, Margaret’s aunt. Joe Hall was involved with the Foundation board for decades, so the duo had been returning periodically for meetings as well. In 1991, the class of 1941 marked the 50th anniversary of its graduation by creating a scholarship to benefit university students.

Despite their long distance from the school, maintaining their ties to the university continued to be a priority for the Halls. Madeline explained why she thought that was important to her father.

“When you have a life-changing experience somewhere, you want to continue being a part of it,” she suggested. Margaret estimates the family returned to campus at least three times per year while living in other states.

Joe and Margaret moved back to Palo Alto after Chicago, living very close to where they’d been in the 1940s. Margaret even shopped at the same grocery store. She continued with needlework, applying her knowledge of stitches to sewing quilts.

“I joined a group that made quilts for kids,” she said. “So I made about 300 quilts. They got spread out over several places like the hospitals and shelters. They were donated. It was a lot of fun to be in a group who all did the same thing.”

In 2000, the couple finally returned to Monmouth for good, settling into a home across the street from Gentle House and a few doors down from Margaret’s childhood home. They’d already established the Joseph I. and Margaret Gentle Hall Presidential Scholarship in Elementary Education to further their support of education, and Joe continued to serve on the WOU Foundation Board and be involved in campus events. The pair supported many WOU additions, including a reading room in Hamersly Library. Joe passed away in 2004.

In the 13 years since then, Margaret has remained steadfast in her dedication to the school. She’s active in WOU events and Gentle House celebrations. She provides brownies and lemonade to Friends of Gentle House crews who spruce up the gardens each month. She donated her tennis racket – a memento from her ill-fated attempt to learn the game – to the Athletics department a few years ago.

Margaret intends to go through Joe’s collection of classic education texts with a goal of donating select titles to the College of Education. Attendees at the annual President’s Club Dinner will find Margaret and Madeline among the participants, happily chatting with other longtime WOU supporters.

Just this week, Margaret celebrated her 96th birthday and attended her 78th high school reunion. She won’t be the oldest alumni at that event, she’s quick to point out. “There’s one boy who’s a year older than me,” she clarified. He lives at Capital Manor in West Salem, so Margaret and Madeline like to pick him up to take him to the celebrations.

Between tending her vegetable garden, reading, preparing items for the Gentle House Holiday Bazaar and spending time with her family, Margaret can be glimpsed at student music recitals or Emeritus Society events. She doesn’t anticipate a time she won’t be involved with her alma mater.