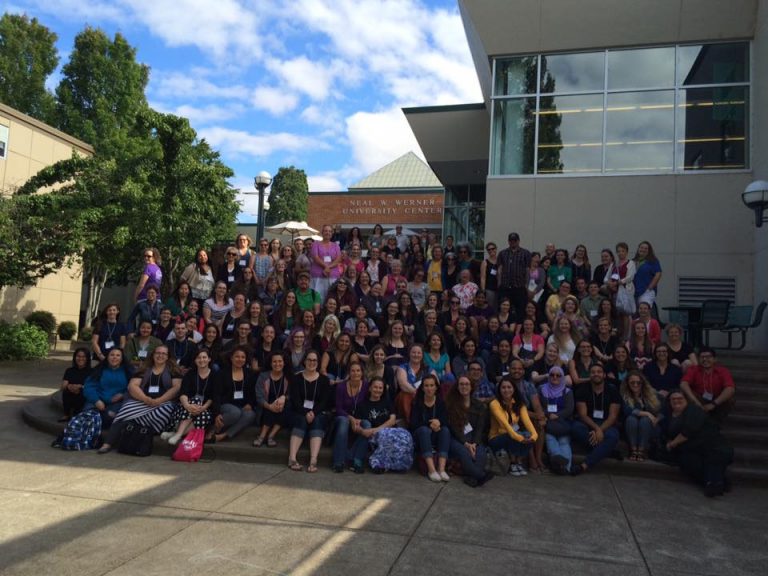 The ninth annual Silent Weekend event took place July 28-30 on campus, and a record number of participants were on hand for the American Sign Language-immersive experience.

Hall, who in her regular duties is co-director of the DeafBlind Interpreting National Training & Resource Center grant as part of WOU’s Regional Resource Center on Deafness, described the long-running program as intense but accessible.

“It’s a very low-cost access point for people who are building ASL skills and for people who are looking for more interpreter professional development,” she said. “It’s a weekend where it’s a wholly immersive, ASL-only experience.”

The origin and funding of Silent Weekend was based on the previous grant Hall oversaw, which created WOU’s Western Region Interpreter Education Center (WRIEC). That grant ran for several decades before coming to an end in September 2016. But that didn’t mean the end of the event.

“(Silent Weekend is) a national conference, and the popularity is going to keep going regardless whether the grant money ended,” Hall explained.

The event has the brainchild of Prof. Elisa Maroney, who had the idea to do some kind of weekend opportunity with an ASL-immersive program, Hall recalled. “We made it a program of our (WRIEC) grant and promoted it out. We’ve consistently had people from 15-20 states; even Canada and Puerto Rico have been a part of it. Because we had the regional grant, we had a lot of contacts in the eight western states and Pacific Rim and beyond because of the power of the internet.”

Silent Weekend participants are mix of adults and students, some who have just a few years of ASL experience and others who have been working as professional interpreters for decades.

“The weekend includes skill-building opportunities to drill down on ASL linguistics and how to improve one’s own output of ASL,” Hall said. “There are also different specialization workshops and workshops related to the interpreting process for folks who are on that track to become interpreters.”

Workshop titles include selections such as “VRS (Video Relay Service) Interpreting: Is It for Me?” and “English Idioms: How the Hell Do I Interpret That?” taught by the ever-popular “Mr. Shineyhead” Patrick Fischer.

Hall herself is a presenter, leading a workshop on the topic “Over the Rainbow: LGBTQQIAA-XYZ: Queer Signs You Need to Know,” which is fitting considering she’s also an adjunct professor at WOU who teaches a class on LGBTQ Studies in the Sociology Department.

The fact that some previous Silent Weekend attendees eventually become presenters or even WOU students is a point of pride for Hall.

“I really like seeing people who come as a participant and as a student of interpreting later come back as a presenter,” she said. “They’ve been out there, working in the field; now they are coming back and contributing to our profession and our body of work. (Silent Weekend) is a great testing ground for people who are curious about how they might be as a presenter and want to try something out. It’s a pretty low-risk environment.”

The risk may be low, but the intensity is high at the event, which only allows ASL for communication. Workshops, breakout session and even social times such as meals all are conducted in ASL. It can be a challenge for some participants, Hall said, especially those who are newer to the language.

“Your eyes are a muscle, and it can be a lot to be constantly homing in,” she said. “You don’t have to practice hearing things, but when you are focusing on communication and language and message transfer, that can really be a challenge and an eye strain.”

Silent Weekend features two educational tracks: ASL skill-building and professional development for working interpreters. Not only do the focuses speak to attendees, they also reflect the breadth of programs WOU offers for people who aspire to work with members of the deaf community.

“Having the ASL immersion (event) at Western connects not only to our undergraduate programs in ASL Studies and interpreting, but also to our graduate-level programs such as Rehabilitation and Mental Health Counseling and Deaf and Hard of Hearing Education. These are all ways we can continue to let people know about Western, what we’re doing, how we’re serving and working with deaf, hard-of-hearing and deafblind populations to be of better service to them.”

Hall is eager to spread the word about WOU’s outstanding offerings for students focused on careers that require advanced ASL skills. It’s a fact that, as an undergraduate in the early 1990s, she was unaware of.

“When I first applied to Western, I knew that it was right around the corner from where I lived,” said the Lake Oswego native, who moved to Salem as a teen. “I didn’t know WOU’s national reputation and esteem as a program that graduates high-quality interpreters, people who are prepared for the profession. Our program is one of those with the best reputation.”

Between her start at what was then WOSC and earning her degree from WOU in 2000, Hall expanded her horizons on both professional and personal levels. She earned a one-year interpreting certificate and worked as a professional interpreter and on political campaigns for several years. She fought a series of anti-gay ballot measures that were up for statewide vote during that decade. She got involved with the Triangle Alliance, a group she still works with today.

In fact, she said, a large portion of her personal network was formed during her time as a student here.

“I owe a lot to Western,” she said. “I owe a lot of my friendships and a lot of my identity formation to the time I spent as an undergraduate student there. I was involved with theater. I was involved in Triangle Alliance, kind of having a moment in time to question my own sexual orientation and having a safe space to really come out and talk to people about that and be supported.”

If she has a sales pitch to offer about WOU, even outside of the outstanding ASL-related programs and the Silent Weekend event, Hall would tout the university’s status as a crucible for personal growth.

“I like the size of Western’s campus because you don’t get pigeonholed into just being a sportser or a theater person,” she said. “You can plug into so many different things and find opportunities for leadership and to develop your skills in so many different things that you have more diversity in your own skill set. It’s a great testing ground for seeing where you fit. What’s your jam? What are you going to get super psyched and geeked out about? You get to try on a lot of different things because of the size of the university and because of the ways you can connect with people.”