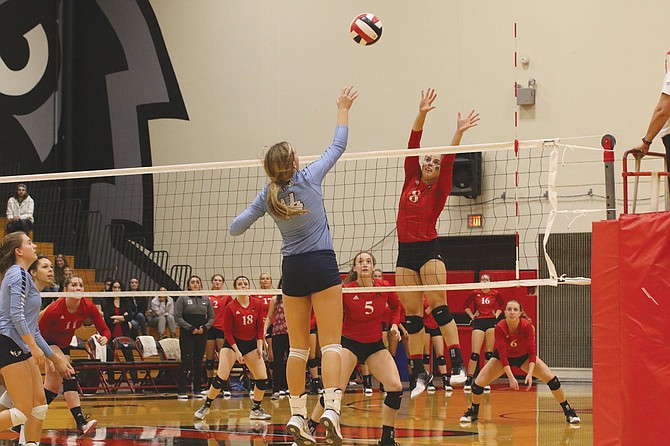 MONMOUTH — The 2016 season was always going to be a transitional one for Western Oregon’s volleyball team. A new coach, Tommy Gott, meant learning a new system and new expectations.

With a year under his belt as head coach, Gott and the Wolves are ready to take a big step forward in 2017.

Gott’s first season with the Wolves led to modest improvements record-wise — WOU finished 8-21 the season prior to his arrival.

But it also had its share of ups and downs — highlighted by the fact that Gott and his staff had to try and make changes on the fly.

“You learn a lot in your first year, I’ll tell you that much,” Gott said. “A lot of it was making sure that myself, and the team overall, trusted the process. I know for myself, and sometimes in the team, there’s some frustration that comes along with the process of learning a new system, and a new style of play and all the things that come along with that. … It’s not easy coming in and expecting things to be changed right away.”

With most of the major growing pains behind them, Gott expects a year of familiarity with players will pay big dividends this fall.

“It helps a ton,” he said. “Last year, coming into preseason, yeah, I had upperclassmen, but I saw everyone pretty much as freshmen because none of them had been through a full year with myself and my staff. This year, the upperclassmen know who I am and can help mentor our younger players.”

Outside hitter Alisha Bettinson will be one of those upperclassmen. Bettinson led the Wolves in kills (337) and digs (320) and earned an all-conference honorable mention.

Several newcomers and underclassmen will have the opportunity to earn significant playing time, Gott said. Every position will be a battle, including at defensive specialist, where Libbie Hoene, who will be a major contender to start.

“I am looking forward to having positional battles,” Gott said.

As the Wolves look to settle their starting lineup, they won’t have long to hit their stride.

Five out of the eight teams from the GNAC advanced to the Division II volleyball championships in 2016, with Alaska Anchorage advancing to the national title match.

An unforgiving conference means teams looking to enter into the conversation for a conference title don’t have the luxury of starting slowly.

“As far as the west region is concerned, this is the best conference there is,” Gott said. “Every night is a grind. You’ve got to go with everything you’ve got and you can’t take anything for granted.”

Clawing their way into contention will be a stiff challenge, but Gott believes these Wolves are ready to go on the hunt.

“We’re excited,” Gott said. “We’re ready to lace up our shoes and get on the court and compete.”