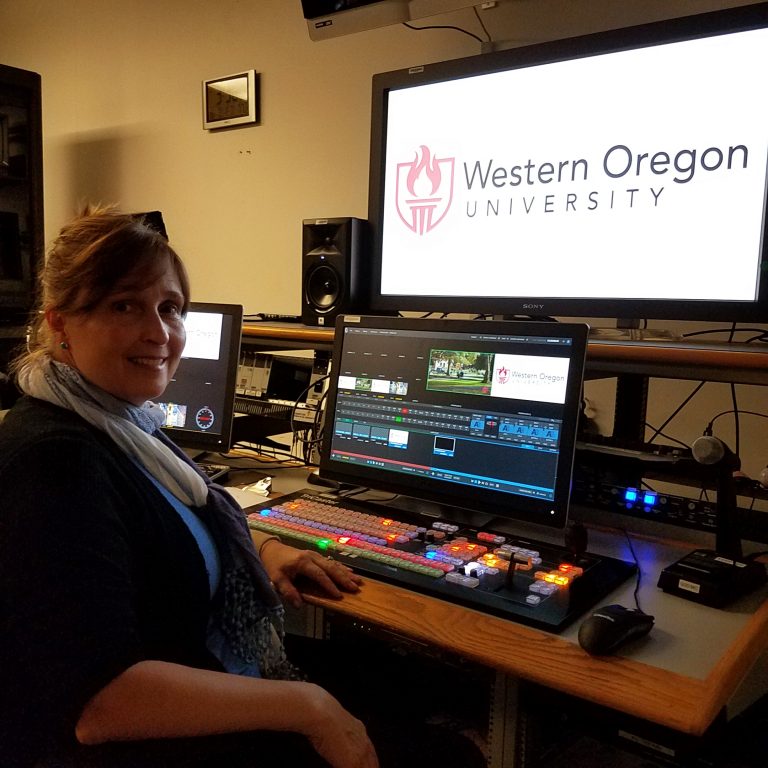 The corner of the University Computing Services department in the Instructional Technology Center where digital media producer/director Deborah Rezell has her office is windowless, dark and awash in a constant background buzz.

She’s got no complaints, though. The office, studio and control room are tidy and efficient—cozy even. It’s a much different scene than the one that greeted her when she arrived in 2010. The engineer who worked in the space before her clearly enjoyed building his own equipment, and as such, the room was filled with tools, cables and other electronic flotsam and jetsam.

“There was still a production studio, but the outer area looked like a shop, with pegboards and tools all over the place,” she recalled. “(My boss) said I could do whatever I wanted with the space, so I cleared all that out.”

Rezell, who has a background in broadcast TV and digital production, pushed through more significant changes, too. She oversaw the upgrading of WOU’s video equipment from standard definition to high definition. She started archiving videos in a way that hadn’t been done before.

“I found boxes with DVDs in them—not in any particular order,” she said. “It’s not like I could go back and give you the 1999 president’s welcome. It would have been taped, but I don’t know where it is.”

That jumbled collection of taped events was a good thing in the end, because now WOU has its own dedicated storage system for archived WOUTV videos.

“When I got here I said ‘If you want me to do my job, I’m going to make a lot of videos. We need a place to keep them,’ ” she recounted. “UCS had to make that area and dedicate the media server space for me. That’s a lot of space. It keeps growing and it’s never going to go away. Other, bigger universities don’t even have this. They have to contract out with a third party. I’ve had Eastern Washington contact me and other schools contact me wondering how we did our WOUTV. I think we are an innovator that way.”

Her prediction was right: She’s created a lot of videos. They feature everything from sports events and lectures to board meeting and student showcases. There are thousands of titles available between WOUTV (accessible on the Portal) and YouTube, plus a full run of programming on two MINET community access channels.

Viewers will find WOUTV on HD channel 717. In July, Rezell swapped out the “repeating playlist” approach she had been using and replaced it with scheduled programming. On 718 is the Western Independence Monmouth Public Education Government (WIMPEG) channel, which mainly features city government meetings and community events. On the cable guide, the channels are described as airing “educational” and “government access” content, respectively.

“Before, you didn’t know when any given show would be on,” Rezell explained. “Now it is changed to a scheduled broadcast. So from 8 a.m. to noon you might find lectures, then from 1 to 3 p.m. it could be a campus event. After 7 p.m. or so, it’s probably sports. Of course, there are our commercials thrown in between.”

Rezell is the only full-time employee in Digital Production Services (DPS). She is ably assisted by a group of students who work up to 20 hours per week. They start their training as part of the camera crew, then eventually graduate to running the control board and directing, if they show a willingness to give it a shot.

Most students on Rezell’s team are Visual Communication Design (VCD) majors, though not all. Some just really want to learn video production, which she feels is an important work skill for succeeding in the world after college. Real-world training for students is one of the two main purposes behind the department, as she sees it.

“Our students enjoy learning this. I’ve had people who are criminal justice majors, and they may still want to work for the FBI, but while they are working for me, they love it,” she said. “VCD majors have to be able to make videos. If you can’t make videos for that company where you are a one-person department, you are missing the boat there. It’s a vital job skill for that VCD major. We try to give as many students as possible some real hands-on experience with really good equipment and really good gear.”

Learning digital production was a necessity for Rezell herself. She entered the job market after college with a journalism degree with a broadcast emphasis and a plan to be a news anchor and reporter. She spent some time in front of the camera, but it wasn’t quite the dream she’d envisioned.

When she needed to move, it was difficult for her to find a TV station that was receptive to her young age and inexperience.

“Back when I was in TV, the really young was not what they were showing,” Rezell said. “They wanted someone in their late 20s or early 30s. They didn’t want someone right out of college. So I started looking at jobs at production companies, behind the camera.”

She found a spot in Carlsbad, Calif., where she produced training videos for Jazzercise instructors and expanded into many other projects. From that point on, directing and producing were her focus.

She worked at a TV station in San Diego before taking a few years off to start a family. They moved several times, and, in 2005, put down roots with Chambers Productions in Eugene, the largest video production house in Oregon at the time. By 2010, the company had downsized considerably, and Rezell was laid off. A month later, she saw an ad for a digital director/producer position at WOU.

She brings a no-nonsense approach to DPS, running several taping sessions each day and striding across campus with purpose, laden with equipment. The second goal for her work, in addition to training students, is to market the university with an ongoing awareness campaign.

“Our students and our community are dialed in,” she said. “They are digitally aware. So if we aren’t taping our own stuff and putting it out there, we are missing an audience. We are missing a chance to brand ourselves and keep ourselves out there.”

With a few viral videos and popular taped sessions online for the world to view, it’s safe to say WOU is more recognized than it was before Rezell arrived. She points to “Dog Steals Show at WOU Softball” as the most watched WOU video on YouTube, with nearly 2 million views. Her personal favorite is “I Go to WOU,” which features an a cappella group covering Duran Duran’s Hungry Like a Wolf with WOU-centric lyrics. Another good one: “Mascot Training 101” with a retired version and current version of Wolfie running through the mascot ropes.

Brand recognition is a motivator behind her involvement with WIMPEG. She shoots Monmouth and Independence events for broadcast on channel 718 on her own time, but she often wears WOU gear while she’s doing it.

“I think that it builds a relationship with the community. People see me out in the community with my Western tag on, and I say “Yeah, I work at Western and I’m taping this for WIMPEG today.’ They are excited to see that.”

She’s also just happy to be filming. It turns out, her affinity for broadcast developed early.

“I like telling stories,” she said with a shrug. “I’m a writer/producer/director. I took one TV class in high school. I did a package about two kids getting expelled for throwing snowballs, and I was like ‘That’s it. That’s what I want to do.’ ”

What’s your favorite video on our WOUTV and YouTube channels?