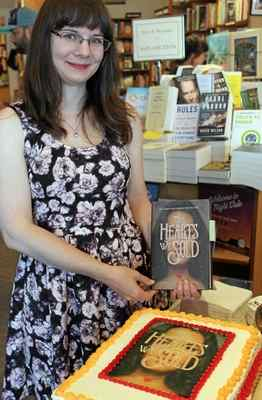 Young Adult Sci-fantasy author Emily Lloyd-Jones works at a bookstore during the day and writes at night. Her latest novel, “The Hearts We Sold,” published by Little, Brown and Company, is listed on Entertainment weekly’s list of the 35 most anticipated YA novels of 2017. A book release celebration and signing was held at Gallery Bookshop in Mendocino on Aug. 12.

“This novel took four months to write and four months to edit,” Lloyd-Jones said. “I wrote it on my couch next to my cat. My cat likes to think she is my editor. She actually gets on the keyboard and taps a key here and there to help me out.”

Lloyd-Jones grew up in rural Oregon, and spent summers with her grandmother in Fort Bragg. She is on staff at Gallery Bookshop and lives in Fort Bragg.

“My family is fifth generation Fort Bragg, the Jackson Family,” said Lloyd-Jones, “and this coast is a magical place and I came back here to live in my grandmother’s house. Unfortunately, she has passed on.”

When she was 12, her cousin gave her a copy of Lloyd Alexander’s “Prydain Chronicles” and triggered her lifelong addiction to genre fiction. She went on to read all the usual suspects, Tolkien, Lewis, McCaffrey, etc. When she was not immersing herself in someone else’s fantastical world, she was usually creating her own.

In “The Hearts We Sold,” her third novel, Lloyd-Jones blends sci-fi, paranormal horror and romance. The central character, Dee, makes a deal with a cunning demon in order to escape her home life — only to fall for a boy who’s made a deal of his own.

“The Hearts We Sold” is a Faustian tale for the modern age that will steal your heart and break it, and leave you begging for more.

“My next book is in process,” said Lloyd-Jones, “and it is another Sci-fantasy for teenagers.”

In September , Lloyd-Jones will appear at the 2017 Atlanta Journal-Constitution Decatur Book Festival, which is the largest independent book festival in the country.