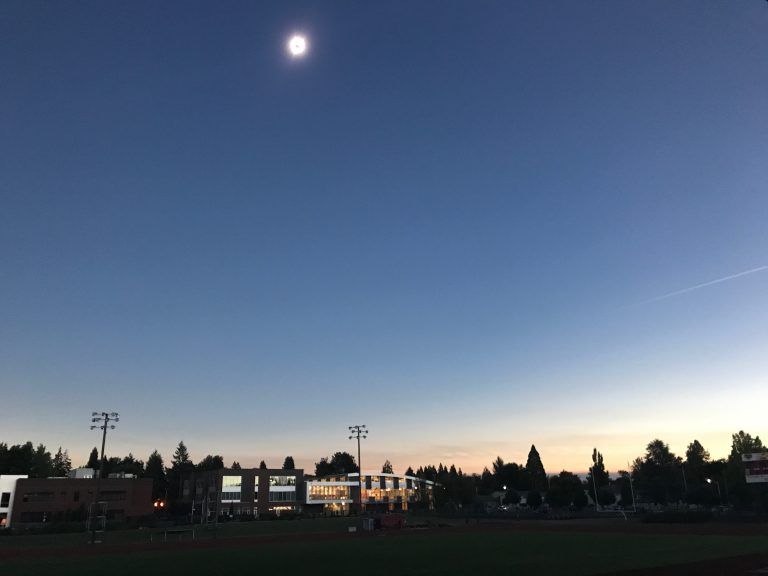 Last weekend, Western Oregon University hosted well more than 1,500 visitors to campus, a mix of alumni, community members, first-time visitors and groups from around the Pacific Northwest. They were all here to observe the total solar eclipse on Monday morning, but weekend organizers also embraced the opportunity to highlight WOU’s outstanding features.

Judging from some of the early feedback, the message was received.

“Everything at the event was exceedingly well organized. The facilities were spotlessly clean, and the student workers were polite and enthusiastic,” said Al Weiss, a visitor who works at Pacific University in Forest Grove. “We had family from Germany joining us for the eclipse, and they were deeply impressed by Western Oregon University. They said, ‘An event like this in Germany with so many campers would be much more chaotic. Everything was done so well here!’ ”

Weiss’ guests were not the only visitors from another country who watched the eclipse from WOU campus. On a board mounted near Ackerman Hall, people could list the country they were from. Responses included the United Kingdom, Denmark, Australia and Canada. There was also a map of the United States posted that included stickers from people in far-flung states such as New Hampshire and the U.S. territory of Puerto Rico. 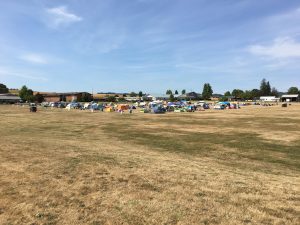 In all, said Trina Horsey, coordinator of Conference and Event Services, there were visitors in 25 RVs and 130 tents, plus 1,200 people staying in WOU’s residence halls.

Hundreds of those visitors took advantage of a free shuttle that traveled between WOU and the Indy Goes Dark festival in Independence. There were jam-packed concerts in both Independence and Monmouth, and WOU presented an eclipse information booth called the Western Oregon Learning Fun (WOLF) Zone at Indy Goes Dark. The booth featured the informative posters created by students last spring as part of the Academic Excellence Showcase.

Photos of the weekend showed families taking advantage of special access to the Peter Courtney Health and Wellness Center and its rock climbing wall. Some guests toured the entire campus on their own, and many enjoyed a few meals in Valsetz Dining Hall. 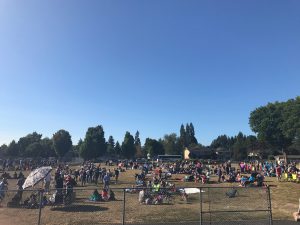 When the time came for the big event Monday morning, hundreds of people flocked to the turf field on the west side of campus and McArthur Stadium, many arriving early to stake out prime spots for their telescopes and cameras. Wolfie the WOU mascot was on hand to greet people, pose for selfies and make guests feel welcome. Families – many comprising multiple generations — were able to enjoy the momentous event together, and many children “oohed” and “ahhed” during the totality.

Deborah Rezell from WOU’s Digital Production Services spent the weekend behind the video camera, capture several different aspects of the festivities. She talked with many campus guests about their experience and why they chose WOU as the place to be for the eclipse. Her great video with highlights can be found on WOUTV. 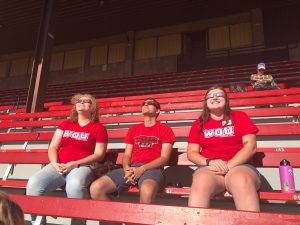 Lisa Catto, WOU’s social media guru, said she just happened to see a large group of people debarking from two school buses on eclipse day, so she asked them where they were from. It turns out people from all over the world were attending a computing conference in Portland and decided WOU’s campus in Monmouth should be their destination for the best vantage point.

“I also got the chance to talk to an astronomer from Florence, Ore., who didn’t have complete totality at home,” Catto said. “So he decided to bring his family — including his retired astrophysicist father — to campus for the eclipse. It was incredible to see the equipment set up and the joy on their faces.”

Despite the large number of extra people on campus over the weekend, things went very smoothly, according to comments overheard from guests. Many members of the WOU community had spent more than six months planning every aspect of the campus strategy, and it showed for visitors.

“We had a wonderful time and experience on the beautiful campus,” said the Chuang family. “This doubled as our first tenting experience, and it was a blast for the kids. We really appreciate all the support and amenities that the university, staff and students provided in making this trip possible and so memorable for us!”

Were you on the WOU campus for the eclipse? We’d love to hear about your experience!