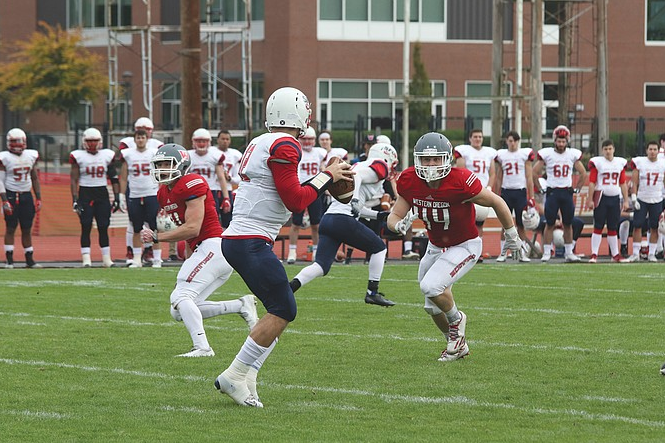 But with a solid core of returning players, the Wolves may be ready to challenge the Great Northwest Athletic Conference’s top teams — if questions at key positions are answered quickly.

The Wolves will look to get wide receiver/kick returner Paul Revis the ball as much as possible.

Revis, a first team all-Great Northwest Athletic Conference selection, led the team in receiving with 70 catches for 1,057 yards and eight touchdowns. He also returned a punt for a touchdown.

“Paul came in as a redshirt and wasn’t our best player,” WOU coach Arne Ferguson said. “He worked hard and he’s the best player on our team right now, honestly.”

Both are in the running to start this fall.

As of press time, Ferguson said he had not named who would enter the season as the starter.

“Both quarterbacks are doing a really good job,” Ferguson said. “We’re excited about the things both of them are capable of doing.”

Torreahno Sweet returns as the top running back, though Fenumiai is the team’s top returning rusher.

Linebackers Bo Highburger and Tyler Johnson will help anchor the defense. Highburger led the Wolves in tackles in 2016 with 111, while Johnson recorded 65 tackles, five sacks and an interception. Highburger was a first team all-conference selection. Johnson was named to the second team.

“Their speed and ability to make plays is starting to stand out,” Ferguson said.

Senior defensive lineman Michael Kluge, who earned an all-GNAC honorable mention in 2016, will have a shot to be a more disruptive force in opponents’ backfields.

Western Oregon’s ability to get consistent pressure will be imperative as an inexperienced secondary tries to learn on of the fly.

“The secondary guys are fairly new,” Ferguson said. “They’re working hard to get used to each other, but it’s going to take some time.”

WOU’s schedule will be difficult. The Wolves open the season against Division I school Idaho State on Thursday.

“They are a fast and a physical team,” Ferguson said. “It will be a good test for us. Last year, we were successful, but that was last year. We’re not going to sneak up on anybody.”

If the Wolves can get steady play from their defensive backs and a steady hand at quarterback, Ferguson expects to see WOU in the thick of the conference title race.

“We’re excited to see what we can do,” Ferguson said.