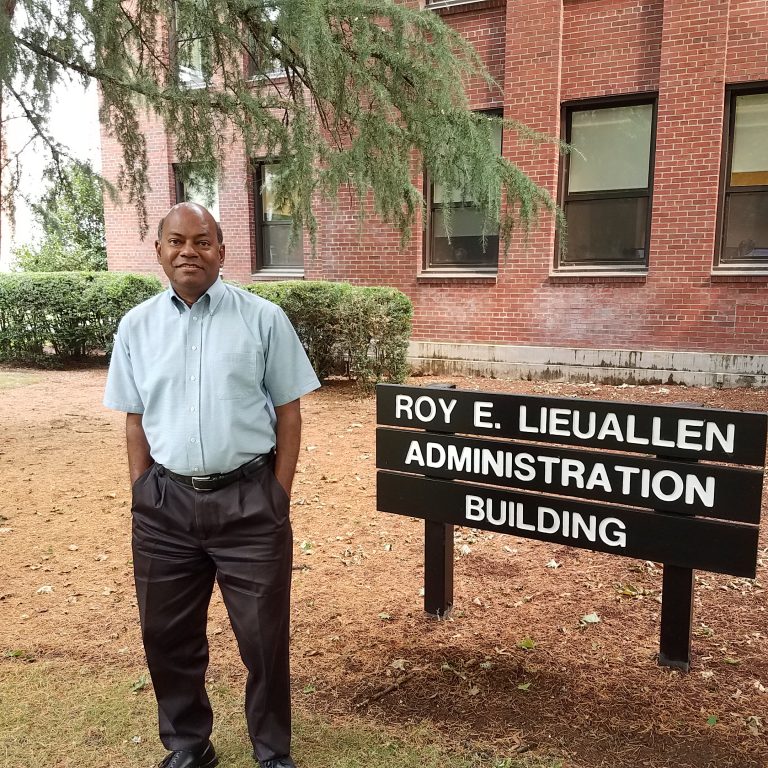 The concept of institutional research (IR) is by no means a new one. But the creation of the Institutional Research and Effectiveness office is a first for Western Oregon University, which until independence in 2015 had relied on the Oregon University System (OUS) for help with statistical reporting.

Abdus Shahid was the OUS analyst who submitted the federally required information on behalf of WOU to the Integrated Postsecondary Education Data System (IPEDS) until OUS disbanded. Now, after two years spent partially in Oregon and partially at St. Johns University in New York City, Shahid is back in the Mid-Willamette Valley, this time as the person solely in charge of WOU’s institutional research. He started his position as director in May and feels the five years he spent with OUS gives him an advantage in organizing WOU’s data.

Shahid—who prefers to be called by that name—is originally from Bangladesh, where his family still lives. He came to the United States in 1995 as a grad student at the University of Delaware and lived in that state for 16 years. He admitted that these days, he prefers Oregon weather to the extremes of the East Coast. Now that he’s had some time to settle back in, he’s got several projects on the front burner.

The first is to simply make sure he’s working with all the correct numbers. The official word comes from IPEDS, so he’s verifying all of WOU’s data matches those master numbers.

“We can’t compare ourselves with other universities if we don’t have consistent data. I’m trying to get firm data for the past 10 years. We will probably create a different type of data warehouse for our reporting purposes so that any time the president or anybody asks me, I have this data.”

Gathering data is a herculean task, but WOU has several mechanisms in place to get it all done. Most info about students comes from admissions applications and other interactions enrolled students have on campus. Information about faculty, staff and administrative employees comes from Human Resources and the Provost’s office. The idea is to compile overall data that provides a snapshot of various aspects of the campus community, rather than focusing on any one individual.

“This is a small university,” he explained. “So if you see a student population, like an ethnic group, drop from 20 people one year to 15 people the next year, it is a small change, only 5 people, but in percentage, it’s much bigger. It will catch someone’s eye, so I’d better make sure these numbers are correct.”

Though institutional research may seem a little “inside baseball” at the outset, it’s really a vital concept for the success of the university. First, it is substantial from a financial standpoint. The Higher Education Coordinating Commission uses algorithms based on specificities of WOU’s student population to calculate how much state funding the university will receive. Second, accurate and extensive IR lends credibility to WOU as a whole.

“If I want to help spread knowledge about Western by going to conferences and maybe making presentations about what we’ve learned here, I have to have good data,” he said. “With institutional research, you are not only presenting the numbers. Ultimately, you are going to analyze them. So if people have doubt about the data you have, they will have doubt about your analysis.”

Having accurate and compelling IR data available online also speaks to transparency, both for the university and for students. Shahid points to annual college ranking lists such as U.S. News and World Report as an example. If a student is reading those lists and wants to learn more about WOU, he or she should be able to find accurate information on the WOU website. Plus, as a public university, WOU is compelled to share information with anyone who wants to see it.

“It’s very important to have as much information on the web as possible because we want to be transparent. It meets people’s needs,” he said.

Although the new Institutional Research and Effectiveness office is largely about the numbers, the second part of the title, “effectiveness,” is a nod to the future. When the powers that be at the university can see trends among student populations or successful programs, they can plan accordingly.

For example, if Shahid can see that an Oregon high school that previously sent 10 students each year to WOU is suddenly only sending two, Admissions can consider whether to send a recruitment team back into that area to find out what is going on or to re-establish a relationship with the guidance counselors at that high school. Or, if the stats show a certain student population is drawn toward a specific program, the university may decide to establish a new specialization within that program. Anything that can boost enrollment numbers is considered a boon for the IR director.

“These are the things we can look out for as growth areas,” he said.

There are some types of data that cannot be published due to privacy laws. Still, there is plenty of general, non-identifying information that the university can mine for insights and planning purposes.

“Everything is trackable because every time you do something (on campus), it’s recorded,” he said. “Almost all schools are really good at collecting data. The only thing is how much time analysts have to analyze it.”

His most immediate goal is to create an IR dashboard, with tables and graphs that provide a true profile of Western Oregon University. He wants the information to be complete, accurate and useful for anyone who wants it, whether they are researchers, students or ranking organizations. A factbook, which details a wide range of interesting university statistics, is also on the docket.

First, though, he’s focused on consolidation and organization of the current data. It’s a task he relishes.

“For me, it’s a challenge because I worked with educational data for a long time,” he said. “I can do many things very easily. But it takes another talent to organize an office so that I can bring many things together and produce something that will be useful to many people.”