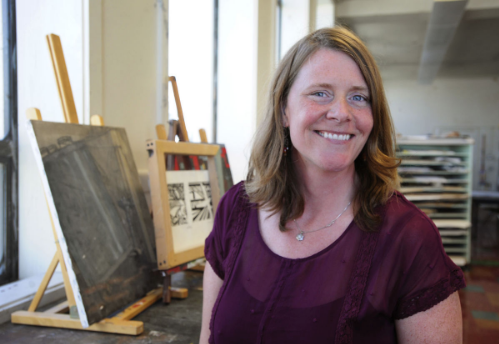 COOS BAY – In the art room at Marshfield High School, cabinets are filled with dusty remnants from discontinued jewelry and photography classes.

When art teacher Heidi Ositis took the job, she didn’t realize she was walking into a dying program. Now she is bringing it back to life, leading six packed classes. Some of her courses have over 30 students, meanwhile she is still surprised she even got hired.

“I didn’t think I was going to get the job when I did my interview,” Ositis remembered. “I didn’t ask the right questions and just came back with the attitude that since I’m not going to get it, I’ll just be me, and that’s when I got it.”

Principal Travis Howard said that after just the first two days of school, kids were clamoring to be in her classes and that she is “reinvigorating the program.”

“That’s a high bar to reach and surpass,” she said. “I’m scared, but it’s a good fear. We’re building something great here.”

After being hired, Ositis went to the school counselor and begged her to stock every art class with as many students possible. If they wanted to drop them later, they could, but it gave her a chance to show them what they’d be missing if they did.

“In my classes I stress self-regulated learning strategies, which means students are encouraged to get up and get their own pencils,” she said. “I want them to have the experience of creating their own time restraints. As they do this, they will become more self-sufficient and build confidence in their art.”

In fact, Ositis is working on an action research project for her grad school thesis at Western Oregon University. The thesis follows the theory that art programs have this aspect to them that can’t be found in other classes, which is self-regulation.

“I want to build that into this program so it is a major facet,” she said. “That way when I have an advanced class, these students can be self-sufficient and invested in their own work. These are skills they can take with them everywhere.”

So far, Ositis has noticed students willing to think outside the box and push themselves on projects. Though she is starting everyone out on basic lessons, she plans on increasing the complexities of those projects as the year goes on. Often in art classes, students will repeat courses. For them, she also plans on giving them separate projects that are more challenging to keep them engaged and broaden their perspective on art.

“We used to have college credit courses through SWOCC (Southwestern Oregon Community College),” she said. “I’m going into the application process now in order to get that college credit for some kids. It will take a couple years to get that done, but it’s being worked on.”

Ositis gained her passion for teaching after working with adjudicated youth, but said since working at Marshfield, she finds high school students more challenging.

“High school kids run more of a gambit, and I enjoy the challenge,” she said. “I appreciate that I was hired, that the school is taking a chance on me. I hope I don’t disappoint anyone.”

By Jillian Ward
The World