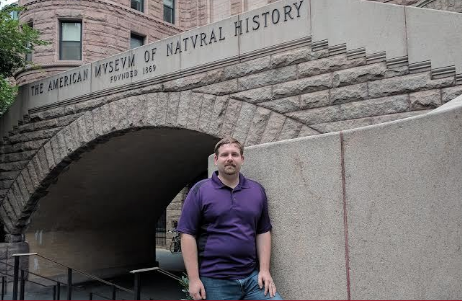 Hunting down that perfect school is, more often than not, treacherous. Other times, it just falls right into your mailbox.

That’s how it all started for former Winter Park resident Trevor Brown, who found his path with the arrival of a simple flyer he received from the American Museum of Natural History in New York City.

Brown had just recently finished taking the GRE and had been searching for a place to continue his education before that flyer promoting the new Master of Art in Teaching arrived.

“I have always loved geology and Earth science, and I have always saw myself teaching down the road in more of a professor capacity,” Brown said. “When the MAT flyer arrived to my door, I pretty much dropped everything — I didn’t realize it was an option to become an earth science teacher, and that they were actually looking for people to teach this for seventh through 12th. The second I saw this opportunity, I had to apply.”

The process itself was incredibly quick for Brown, who filled out the usual paperwork before doing an interview soon after.

Not even a week later, Brown received an acceptance email from the American Museum of Natural History, and it was just a matter of getting up to New York City.

“I was absolutely elated to receive that email,” Brown said.

Originally from Salem, Oregon, Brown did his undergrad at Western Oregon University, where he graduated in 2012 with a degree in Earth science.

After a few years of working in Oregon, Brown decided to move in 2015 to Winter Park to check out the job market and be with his partner. In the years he was in Central Florida, he continued his education by taking a few classes at Valencia College as a means to help round out his education. Brown said his time at Valencia was a huge boost to inspiring him to go to graduate school.

“I really appreciated my time at Valencia — I don’t think I would be here if it wasn’t for the extra work I did at Valencia,” Brown said. “And specifically not the course work, but the professors involved. My calculus professor (Abdul Zainulabdeen) was really there for me and really helped me to succeed in his class, and other teachers have made an impact on my life, and I want to give back in that capacity.”

Of all the students who applied to the MAT program at the museum, only 16 were chosen.

The MAT residency program itself is actually fairly new and incredibly unique.

It originally started as a pilot program in 2011 that focused on Earth science and was conferred by the New York State Board of Regents, but by last year was fully approved by the board — allowing the museum’s Richard Gilder Graduate School to directly confer the degree.

Although the program includes plenty of academic classes, which started June 5 for Brown, it is also largely a residency program that requires students to act as a student teacher in actual classrooms and helps educate visitors checking out the museum.

“One of my classes — it’s my residency class for the museum — they had me interacting with the public just a few weeks in and teaching in that capacity,” Brown said. “Not in a formal situation, but just someone who would stand in one the museum halls and interact with people who would come up to where I was stationed, and I would just have a friendly conversation with them.

“That was really engaging with me, and I really appreciated that,” he said. “Being able to teach so early on — not just getting all this information and being tossed into a classroom being told, ‘Here, teach’ — that was great.”

Brown will be getting a lot of experience in New York after he graduates. As a part of the MAT program, he will spend four years teaching in the state.