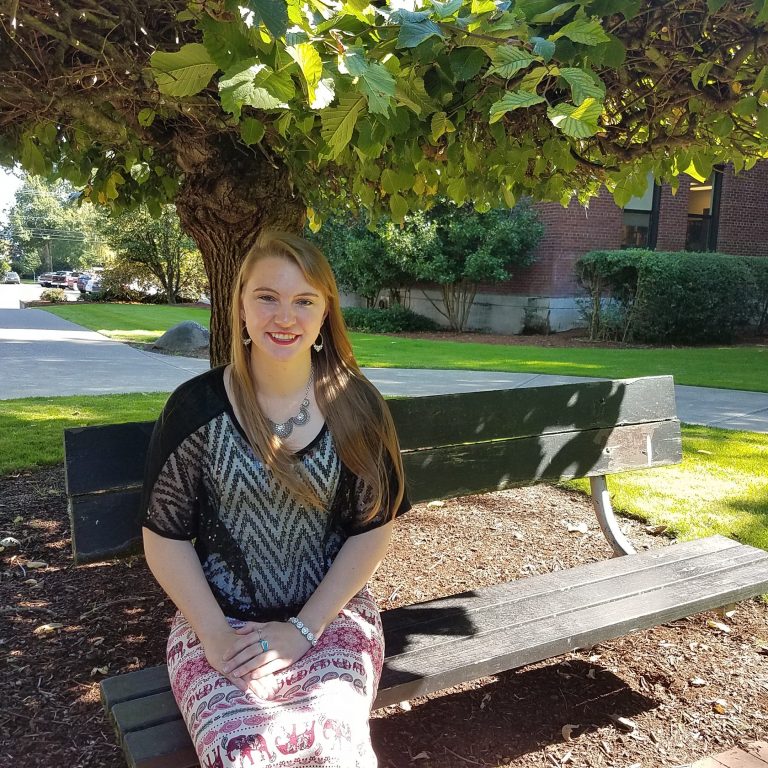 A student’s first few terms at a four-year university can get a little hectic. Jessica Freeman ’18 gets it.

But the Associated Students of Western Oregon University (ASWOU) president said that getting involved in a club or organization can make a world of difference for students acclimating to their new environment. While students may worry they won’t have time for anything besides being a good student during their freshman year, Freeman believes joining a group and gaining a stronger sense of community is exactly what students need to succeed at the start of college life.

“It breaks my heart a little bit that there’s so much fear around going to college that students can’t find a way to get involved right away,” said Freeman, who served as a student senator during her freshman year. “I’m a strong advocate for ‘It’s never too late to be involved.’ It’s OK if students aren’t getting involved in ASWOU, as long as they are finding their home somewhere on campus.”

Freeman, a Sutherlin native, remembers the challenge of making the transition from high school to university.

“I expected it to be just like high school. I was quickly wrong,” she said with a laugh.

However, she forged a connection with an ASWOU member during her first term at WOU and decided to jump right in to making her mark on campus. “I found my home really quickly in ASWOU,” she said.

A self-described small-town girl from a family of educators, Freeman knew Western Oregon University was the place for her. Her uncles had attended WOU and played on the basketball team, plus she didn’t want to go the community college route that so many of her high school classmates had chosen.

She started with the student senate position but went straight to the top her sophomore year. She makes no bones about her motivation.

Freeman, a community health major who aspires to a career as a cardiothoracic surgeon, served on the Judicial Board throughout her junior year. The board oversees WOU’s clubs and organizations, ensuring they are adhering to the rules laid out in various governing documents. That experience presented specific communication challenges that Freeman credits for personal growth.

“A judicial administrator does not have an opinion,” she said. “I worked really hard with the adviser to make sure that I was still able to provide information and clarification without inputting my opinion. That experience made me grow a lot. Before, I would always share my opinion of the top of my head. Now I’m much more reserved. I can think about things, formulate the best options for what to say. I’m very happy I got that skill.”

It was in 2015 that WOU’s campus was declared a tobacco-free space, a project Freeman is particularly proud of. The designation was the culmination of years of work by students, employees, administration and a wide range of governance groups. The collaborative effort shows the power the campus community can have when it comes together with a common mission.

As far as her goals for her presidency, Freeman names three: First, she wants to raise awareness about ASWOU and what it does to help students. She was alarmed to learn last year during an Incidental Fee committee meeting that the perception on campus was that ASWOU wasn’t that active.

“I want students to be able to see that ASWOU is students working for students. It’s important they see that their money is actually going to good use. I pay for school out of pocket, so I understand how hard it is to pay for school. I have to make sure that students feel like they are getting their money’s worth.”

Second, she’s working hard to make sure clubs and organizations are staying within budget while using their funding for maximum impact. To that end, she spent her summer learning about budgets and accounting, which is a bit out of her comfort zone, she admitted.

Finally, Freeman is looking toward the big picture of higher education funding. She said the majority of her work is with the Oregon Student Association, which represents more than 110,000 students from 10 Oregon campuses. The group’s collective power allows it to access key decision-makers in the Oregon Legislature and related panels.

“It allows us to have big conversations with higher education in Oregon,” she explained. “How can we tackle this as a group? How can we tackle this individually? Western Oregon University is special because we are close to the Capitol. We can get a lot of students over there quickly. The other schools don’t have that advantage.”

She’s perpetually on the lookout for ideas that will lead to improved voter turnout and overall student involvement, she said. One strategy ASWOU is exploring is to target transfer and non-traditional students, groups who may not consider clubs and organizations a high priority.

“ASWOU really focuses on anybody who feels they can’t be a part of campus because of their age or what’s going on in their life or whatever responsibilities they have outside of being a student,” she said. “It’s so important to me that they get involved. I know how cliché that sounds, but it made the difference in my college career.”

Another game-changer that she advises students to consider: making connections by asking for help. As a highly independent person, Freeman said she didn’t realize until a rough patch in her junior year how willing faculty are to help students succeed.

“I was sort of an expert on all the resources students have on campus like tutoring and the student health center,” she recalled. “But what I didn’t realize was how much my professors and my academic adviser were actually there to help me. When I finally decided to ask for help, it changed my whole perspective for Western. I loved it already, but now I’m telling everyone to just ask for help, and they will get it.”

Getting involved in student clubs and organizations, being active in residence hall communities, and signing on for service-learning outings also are great ways for students to build a supportive community around them, she said. She got started right out of the gate, but she firmly believes it’s never too late in a college career to get explore options.

“I’ve loved every experience I’ve had at Western. It’s made me grow as a person and a student and a leader. Every individual can have a great experience if they have the information about how they can make that college experience great.”