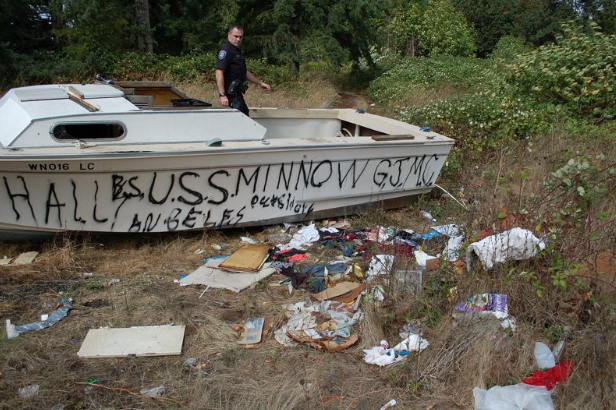 Mike Day grew up on the poverty line with his single mom and occasionally was homeless, living for a time at a family friend’s house.

Now as the Oregon City Police Department’s new homeless liaison officer, Day is responsible for all of the locals who have lost their homes or who are in danger of becoming homeless.

Day credits his mother for making sure he graduated from Oregon City High School in 2004 and inspiring him and his siblings to get good jobs. Although they grew up poor, the Day household would take mission trips to Mexico to build houses and basketball courts.

“It was planted in us by our mom to serve and love people,” he said.

Day now has two boys of his own. At 2 and 5, they’re too young to really understand what he does for a living, and he says that they just think it’s cool that he drives around in a police car.

Lauren Dayton, 49, became homeless about a year ago when she received an eviction on Center Street and said she could describe Day’s effectiveness as a homeless liaison officer in one sentence: “He’s very kind, sweet and cute.”

On a recent ride-along, Day’s main job seemed to be to know all of the homeless people in Oregon City while demonstrating his amazing ability to keep hundreds of names and faces in his head.

“As I get to know the homeless population more and more, they’ll just say ‘hi’ to me, which isn’t a relationship maybe that they’re used to having,” he said.

A 10-year veteran of OCPD, Day keeps reports on all of the homeless people he works with, not formal police reports, just digital files of his notes organized by person. When he meets someone new who appears to need help, he’ll fire off a series of questions and fill out a form of his own design: “Where did you sleep last night? Where do you plan to sleep tonight? Have you eaten today? Do you get food stamps? Do you have interest in employment?…”

Day’s not just making conversation. As he gets answers, he’ll begin to identify barriers to employment such as mental health issues, advanced age, disabilities or drug addition. Each of these conditions suggests to Day various options for bettering people’s lives such as Social Security benefits or an OC-based transitional center that offers a GED program to people who have never graduated from high school.

“Every homeless person has a different story or different reasons why they’re homeless,” Day said. “When you see someone who’s dirtier than you are or who’s carrying around more belongings than you would carry around, the general perception could be that they’re scary, but the reality is that most of them aren’t scary or dangerous.”

Underneath all of those questions is the more-than-implied threat that Day could arrest or ticket people for their homeless behavior. Prohibited camping is a misdemeanor in Oregon City’s public areas, and others could be cited for trespassing if they’re on private property.

“That’s an avenue that I can take if I need to pursue it criminally, but my avenue generally is to talk with them about what they may need,” Day said. “Most of the time my approach is to warn them of that offense. If someone is found camping repeatedly at the same location, then sometimes we have to issue a citation or make an arrest.”

Day has started a blog at orcity.org/police/outreach-stories with a growing list of success stories. In it he describes how he helped Kathy Knox receive food stamps, Benjamin Wilson find transitional housing, and Kristine Rauch get a room at Oregon City Residential Care. U.S. Army veteran Mitchell St. Marie got much-needed medical attention for the infected wound on his leg, and overhearing his conversation with Day as an ambulance arrived, an employee for Pioneer Packaging named Josh Dale offered to pay two month’s rent on his storage unit while he was in the hospital.

Dayton said she wanted to be Day’s next success story and was proud to tell him that she had gotten to the top of the list at Oregon City Terrance, a complex of subsidized apartments on May Street.

“I want a normal life, and I’m worn out and tired from having to sleep on the street,” Dayton said. “I was sick and in the hospital for two weeks because of my situation, and it was an awakening that I needed something better.”

Speaking with Day at the Oregon City Transit Center, Jason Conroy, 46, also was feeling motivated to overcome homelessness after the campground host at Clackamette Park asked him to move along.

“I want to get back on my feet and out of this rut, because it gets crazy out there at night,” Conroy said.

OCPD Chief Jim Band said that he has been impressed with Day, who exceeded all expectations when he took on his new role this year. Band said that Day truly understands how homeless people are not a homogenous group who all have to be dealt with in the same way.

“They’re a bunch of individuals all with unique stories,” Band said. “Once he got into this position, [Day] has literally wowed me in addressing each of their unique concerns.”

Oregon City had 322 homeless people in the most recent official count, more than any other city in the county.

“The mission of this [position of mine] is that we recognize that there’s no simple solution to homelessness, so we’re trying to take a creative approach,” Day said.

Day graduated from Western Oregon University and went to the Oregon State Police Academy, but he said his heart was always in Oregon City, the place where he grew up.

“Nothing against OSP, because I was happy to have them hire me,” Day said. “I was mature, very much so for my age, but I appreciated the value of having military discipline in my life.”

Day took a big chance leaving the OSP academy for OCPD. If OCPD hadn’t hired him when it did, OSP’s strict rules would have kicked him out of the program for leaving campus to attend the OCPD job interview.

On the day he took this news editor of the Oregon City News on a ride-along, Day was awoken at 2:45 a.m. as part of his dual role as a member of Clackamas County’s Hostage Negotiation Team. Day still had to work a full shift and was covering for another OCPD officer who was sick, so he was in extra danger of being called away from his duties as homeless liaison.

Asked how he was staying awake, Day said that he had “a little coffee, but mostly it’s just by keeping moving and talking with people.”

Surveying the abandoned campsites and mounds of trash between the commercial properties on Beavercreek Road and Metro’s Newell Creek Canyon Natural Area, Day said he could see why there can be animosity from the public toward homeless people.

“Some homeless people can leave quite a mess, which is hard on nature,” Day said.

Sitting under a picnic shelter at Clackamette Park, Edward William Matherly, 39, greeted Day with a stream of insults and profanities. Matherly has been arrested multiple times for charges like trespassing and disorderly conduct, but Day said that Matherly seemed unable to carry on social interactions even prior to his arrests.

“My hope is that if I ask after him multiple times without arresting him, eventually he’ll want to seek services,” Day said.

Another chronically homeless man told Day that he was planning to get a bus ticket south because he thought he owned the border between Utah and Idaho. Day let this man borrow his cell phone to talk with his case worker about his medications.

Another man, Conroy, seemed more likely to overcome homelessness in the foreseeable future. Conroy said he became homeless after he was injured as a customer at the Wilsonville Fred Meyer. Conroy’s attorney is expecting a settlement to come in around January that would get Conroy back his permanent housing. Day told Conroy to make sure he stays sober as he looks for work in the meantime.

St. Paul’s Episcopal Church, which offers meals each Thursday, invited Day to eat there recently, and he got a chance to sit down and talk with a lot of people who were both homeless and housed. Day keeps up with his clients even after they’ve had successes. Wilson is still looking for a job but is glad to no longer be sleeping under a carpet in a local park. Knox’s sister told Day that Knox got a job at Doc Martins and was planning to move out of a transitional facility. A citizen made a tote bag for Day to take to Rauch in her new room. A recuperative care program case manager with Central City Concern told Day that St. Marie’s wounds were chronic enough that he wouldn’t have to worry about an imminent discharge.

Day knows that progress will be slow, but he hopes for continued success. Trent Clinkscales donated two 24-hour portable toilets and half their maintenance costs to the city after hearing Day talk about the problems with feces and urine being found downtown overnight, after the park bathrooms close at 10 p.m. One portable toilet with a painting of the 1895 suspension bridge on it was installed last week underneath the Arch Bridge, and the other with a “Totality” eclipse painting went in the Oregon City Municipal Parking Lot.

Salem-based Arta Potties has installed its first ADA-approved, wheelchair-accessible portable toilet at the parking lot, because Day wanted access for the large proportion of Oregon City’s homeless people who are disabled.

“When you gotta go you gotta go,” Day said. “This is a very creative solution to a real problem, on both sides of the line — the homeless population and business owners — so why not do something to show we’re trying to fix that?”

Band and other city officials are hoping that the restrooms will lead to more dignity for Oregon City’s homeless population.

“The homeless have as much right to be here as you and I,” said city Commissioner Nancy Ide at the grand opening of the toilets.

Arta Potties organizer Rebecca Courtney said Oregon City would provide a good example to her hometown of Salem as to how to support the local homeless population. She said she encountered lots of red tape installing Arta Potties in Salem, while in Oregon City, everyone just came together in an effort to reduce arrests and public indecency.