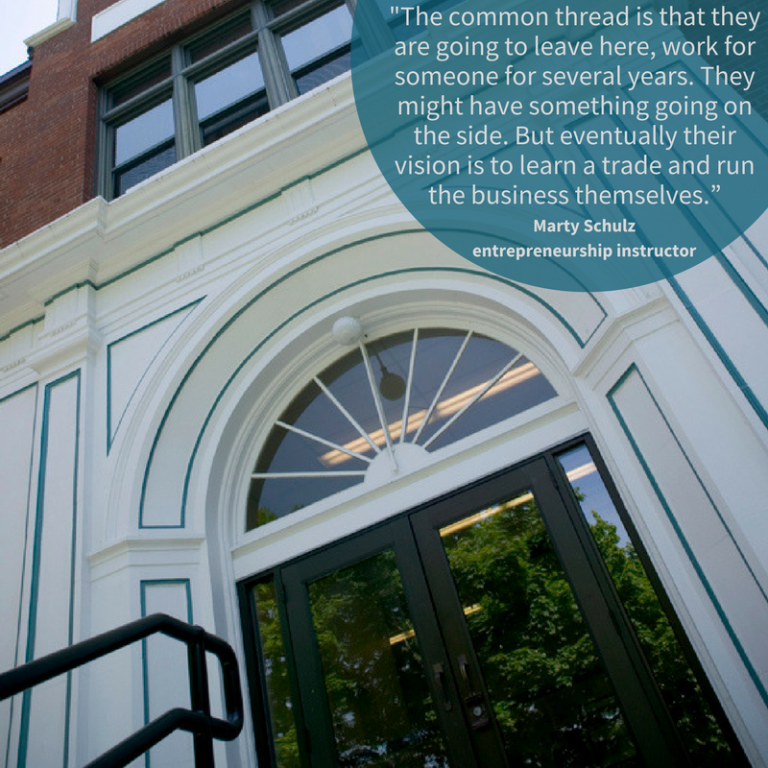 As the work force moves farther way from the traditional format—think employees who spend 10+ years at a company—to the modern affinity for a new job every few years, Western Oregon University’s Business program is ready for the change. Case in point: the entrepreneurship minor, which allows students, both current and incoming, to chart a path toward business ownership.

It’s not difficult to find “characteristics” about Generation Z, the group that came after Millennials and whose members are currently enrolled or enrolling at WOU. Plenty of market research touts the group’s desire to work for themselves—60 percent—rather than a big corporation. Many students with an eye on the future are turning to WOU’s entrepreneurship concentration.

“It appeals to them in that they don’t want to work for someone else,” said instructor Michael Martin who has been at WOU for 27 years. “They want to have independence, and owning their own business and operating it is a way to do that. I hear it a lot: ‘I eventually want to have my own business.’ ”

Martin is just one of a handful of faculty who focus on entrepreneurship courses. Most of his classes don’t have prerequisites, so he gets a lot of students who have seemingly unrelated majors, such as theatre. Another instructor, Marty Schulz, said he sees the same trend.

“The really beautiful thing about having a minor entrepreneurship is you get people from all over the campus,” Schulz said. “You might get a computer science major who wants to have their own software firm. You get a really nice cross section.”

Business as a whole is one of the top five programs at WOU. It includes a variety of available concentrations and produces plenty of degree-earners, according to Business and Economics Division Chair and professor Hamid Bahari-Kashani.

“We had more than 160 graduates this year,” he said, adding that he believes students who start freshman year as a business major tend to stick with it all four years. Others switch over from a different major to business, he said. Overall, demand has been consistent, though the curriculum has flexed over time.

“Even if the students come into our programs and don’t want to own their own businesses, they want to at least get the gist of what the new reality is in the job market,” Schulz said. “My take on it is that Gen Z wants flexible work schedules. They want to have fun, and they want pretty good income. They are more financially motivated than the Millennial group was. They have jobs, sometimes more than one. They are smart people who are looking at the labor market and seeing it change. It all boils down to people having more entrepreneurial careers.”

That’s not to say that traditional business administration skills have been superseded. WOU Business majors and Entrepreneurship minors still get a solid foundation in accounting, writing business plans, marketing, human resources and more.

“The skills needed haven’t changed much,” Martin explained. “It’s more the atmosphere of the work. There may be a change in emphasis over the years, but you can’t abandon the basics. Even if people work for bigger companies rather than owning their own, they are likely to be thrown into a situation where they are expected to come up with creative ideas and plans for accomplishing them. So that aspect may have changed, but the skills and knowledge they need to do it are still there.”

Creativity among entrepreneurship students is abundant, Schulz said. He teaches a one-credit course that tasks them with proposing a way to make $500 per month selling something to people they don’t know.

“It’s just amazing the stuff they come up with,” Schulz said. “They come up with computer repairs or upgrading computers for gaming. I had a guy making $30,000 per year selling motorcycles, doing the whole seasonal thing. He’d buy them in the fall, store them, tune them up, make them pretty and sell them in the spring. You’ll see students doing things with snowboards. All kinds of things.”

Schulz, who has taught at WOU for 21 years, is particularly interested in the sharing economy and how members of Gen Z might be more likely to see income opportunities in multiple places. He feels students are innovative in finding a side hustle—or even several—and having certain coursework under their belts helps make that possible.

“This is a wonderful time for small gigs,” he said. “Never before have you had the ability to be so targeted and yet have such reach. Having a global reach, you can be really niche with what you sell but still have amazing reach.”

Other students take a more traditional approach, Martin said. They work regular jobs while they are at the university but are looking for a way to break out of a structured existence, at least as far as work is concerned. A degree in business puts them on a path to that end.

“I think part of it is that students think, ‘If I have a business degree, that will make me more employable’” he said. If they have an eye on eventual small-business ownership, they know they have to learn the basics.

Keeping students grounded and realistic is part of the business education process. Given WOU’s small class sizes and opportunity for direct communication with the faculty, students are positioned for success.

“We have individual attention,” Schulz said. “We pay a lot of attention to helping students; when they develop their business plans, we help them customize those plans and make them more realistic. That gives us a differentiation from U of O or PSU.”

Entrepreneurship minors also get specific, applicable real-world preparation, he said. “That’s where we do a better job. Students can choose an industry they are attracted to, and who it is they’d like to work for. They do a competitive analysis on that industry, so when they graduate, they can go to into interview and they know a little bit about the company and the industry and what makes that company unique. They are better equipped, and that’s why we are better on projects.”

Not every graduate plans to create a company, Bahari-Kashani pointed out.

“We are getting our fair share of students just like any university. Students are interested in business, and the jobs offered to business students after graduation,” he said. “Some have very targeted plans. They want to become a CPA or a business law attorney. They plan to go to law school with their bachelor’s degree. A good number of our (international) students plan to get into our Management and Information Services program after they graduate. A good number of them go to the master’s program here at WOU. It all depends on what are their plans and who far up they want to go.”

As the nature of the workplace continues to evolve, WOU’s curriculum does the same. Where classes before may have been focused on working within an existing business, the approach now trends toward starting a company from scratch. That includes learning about all aspects of business management — marketing, accounting, legal requirements – but also how to be nimble and how to create integrated plans.

“It’s more about taking ownership of the gig and making the thing happen,” Schulz said.

These are lessons the WOU Business program can help with, Bahari-Kashani said. “Our faculty are very friendly. Students see that, and that we are ready for them.”