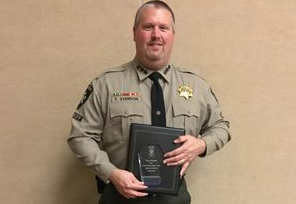 A Clatskanie local who became the sheriff in Yahmhill County was recently honored for his commitment to mental health training.

The 7th Annual Northwest Regional Crisis Intervention Training (CIT) Conference was recently held with the goal of drawing awareness to techniques for dealing with people in a vulnerable state of mental health. As part of this conference, Yamhill County Sheriff Tim Svenson was presented an award for 2017 CIT Agency Executive of the Year along with Walt Beglau of the Marion County District Attorney’s Office.

Svenson was recognized for his commitment to mental health intervention over the last ten years at the Yamhill County Sheriff’s Office. Since recognizing the value of the program both on the streets and in the correctional facility, he has worked to provide access to the training by all his sworn staff and has collaborated with bordering counties to offer regional training at least three times per year.

In 2017, Svenson solicited and was awarded funding from the Department of Public Safety Standards and Training, which allowed him to partner with the McMinnville Police Department and the Yamhill County Behavioral Health Division to offer this training free of charge to other agencies around the northwest.

Svenson has also established a partnership with Yamhill County Health and Human Services to provide mental health counseling and crisis management in the Yamhill County Correctional Facility and as partners in the Community Crisis Response Team (CCRT).

In August, Sheriff Svenson collaborated with Yamhill County’s chapter of the National Alliance on Mental Illness (NAMI) to bring a presentation to McMinnville outlining Rural Law Enforcement Assisted Diversion (LEAD). LEAD is a harm-reduction program which allows deputies and officers on the street to immediately divert individuals, who are otherwise at risk of arrest, into intensive case management services, including those with known or suspected mental health concerns. This program is consistent with Svenson’s goal of keeping vulnerable populations out of jail and instead connecting them into services they need.