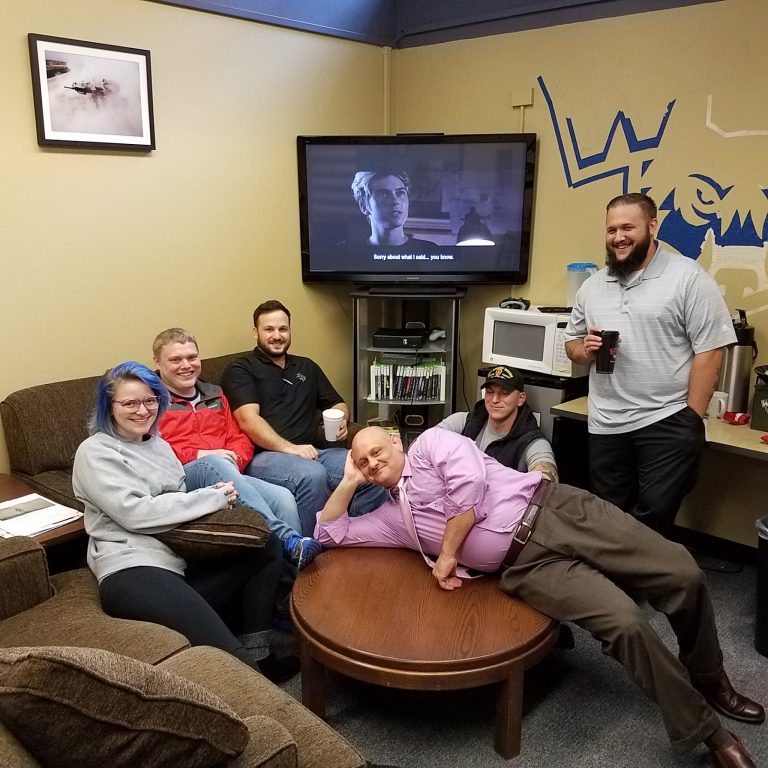 We are currently highlighting services that are tailored to three specific audiences: nontraditional students (Nov. 1), veterans (today) and transfer students (Nov. 15). There is a lot of overlap within these three groups, of course, so readers may qualify for multiple resources.

According to Veterans Services Coordinator Andrew Holbert, student-veterans constitute about 4 percent of the Western Oregon University student population. Those who seek the extensive resources available to them—Holbert aims to connect with as many as possible—can find themselves uniquely positioned to both create a community and reach graduation successfully.

That’s exactly the goal at WOU, which for several years has earned status as a Military Friendly university. Holbert takes the designation extremely seriously.

Holbert’s domain is the Veterans Resource Center, located downstairs in the Werner University Center. There are offices, a quiet study space and a lounge area, all bordered by walls adorned with racks offering brochures and pamphlets about services for student-veterans.

Traffic in and out of the center is brisk, with eight to ten people using the space at any given time. The free coffee certainly is a draw, and many students take advantage of the computers, free printing and lockers as well. A large television displaying Netflix is also hooked to an X-Box and surrounded by comfy couches.

Holbert estimates about 30 students visit the center several times per week. That’s just a fraction of WOU student-veteran population, but it’s a big improvement over how the center was used two years ago, before he arrived. The lounge area may seem like just a place to hang out, but Holbert believes the impact is greater than relaxation.

“What we want to do here is what I call ‘reintegration, not isolation,’ ” he said. “When veterans get out, they have a tendency to just go do what they need to do, and then just pull out. We want to get students something that connects them to peers. You can study in the library. The reason to come here instead is because there’s an opportunity to connect with other veterans. The longer we are around, the more we understand the Western veteran student population.”

Holbert said about 20 percent of WOU’s student-veterans have been or are involved in the National Guard. However, there are many who have separated from the military after the standard four-year stint. Still others were career military who have retired and now are pursuing higher education. Every branch of the military is well-represented in the center, both by the students and by the flags draping the walls. Holbert believes that diversity proves that veterans can’t be pigeonholed.

“When people think of ‘veteran,’ they think of the grumpy old guy at the VA wearing the old veteran hat,” he said. “But what’s unique about our campus is that you’ll have individuals who are 20-some years old, they live in the residence halls and they’ve been to Afghanistan. They are in the National Guard, they enlisted when they were 18, then they were deployed. When they got out, they went back to school. The veteran population here is very, very young.”

Despite being young, however, some student-veterans are married and/or have children. These students have the option to stay in family housing on campus, in either the Alder View Townhouses or Knox Street Apartments. The Child Development Center is a potential child-care solution at a discounted rate. A large portion of WOU’s veterans, 39 percent, are women.

In addition to the Veterans Resource Center and family housing, student-veterans have multiple other tools available to help them succeed. First, the application for admission to WOU is at no cost to veterans, as long as they meet fee-waiver requirements. Once they arrive on campus, veterans can get help wrangling credits in the Registrar’s office from the Veterans’ Certifying Official. Should they need academic advising, Interim Director of Student Success and Advising Jesse Poole is himself an Air Force veteran who can help smooth the path to graduation. There are even a handful of reserved parking spots in Lot H that are specifically for veterans.

Most student-veterans have their education funded though the GI Bill or a related program. Still, there are a few specialized programs, such as the Veteran’s Dependent Tuition Waiver, WOU’s Voyager Program and Yellow Ribbon, that can supplement what the government provides. Of course, student-veterans are welcome to apply for additional funding through the WOU General Scholarship application as well, said Scholarship Officer and Financial Aid Counselor Natasha Roman.

Most of the services to veterans that WOU offers are coordinated through the Veterans Resource Center. Those racks of brochures in the space address both WOU-specific offerings and state or federal programs. Some of the pamphlets are linked to WorkSource Oregon, and a veterans unemployment representative routinely does mock interviews and helps with resume writing. Holbert gets lists of job openings that are updated weekly. A Polk County Veterans Services office also visits, helping students with disability claims, home loans and other services.

“We’re not just giving you a degree and then saying ‘Good luck with that,’” Holbert said. “Hopefully by the time you’ve got a degree, you’ve had a resume class, you’ve started to look at jobs, you’ve met with this guy who can help you get where you’re trying to go.”

Holbert is a firm believer in addressing students’ needs holistically. “By the time you leave WOU, your personal life, your professional life and your academics are all well-rounded. You should be ready to leave here as an individual. You’ve learned to integrate with other people, who haven’t been in the military. The transition period looks different for different people. There’s not a set model that works for everybody.”

Some student-veterans, he said, know the Veterans Resource Center exists but aren’t initially interested in getting involved. They may eventually come around, like Jeremy Bullus, a transfer student who has become the vice president of the WOU chapter of Student Veterans of America. He came to Monmouth via University of Oregon, where he only stayed for a term.

“It’s like night and day difference here as far as your relationship with professors,” he said. “At Oregon, the professor was way down (at the front of the lecture hall) and you’re in the second deck. There are three screens so everyone can see. They said “Don’t worry, we’re going to break you down into smaller groups of 50.” I thought, “That’s not a smaller group!’ That’s still twice as big as our classes here. WOU fosters an environment to learn something instead of dealing with a graduate teaching fellow who doesn’t really want to be there.”

Chanel Karbonski, on the other hand, reached out Holbert before she even arrived. She was about to separate from the military and was facing a short turnaround time. She chose WOU because she could get in without an SAT score, which she didn’t have time to take before applications were due. She called Holbert from her ship – she was a navigator in the Navy – and was eager to meet him when she got to campus. She can be found in the vets center nearly every day.

“The people are very humble and willing to talk to you,” she said. “And you can bring up funny stories about the military and everyone gets it. You can forget about school for a minute and it’s like you’re back in the military.”

Bullus and Holbert are working toward adding veteran-specific student orientations throughout the year, much like TSOAR exists for transfer students, to get more visibility for veterans resources. It’s all about building relationships to help students succeed, Holbert said.

“There’s an SVA statistic: 74 percent of veterans succeed in college if they make one meaningful relationship,” he said. “If we can set that up, if we can create that climate, we’re doing our jobs.”

The Veterans Resource Center has a very active Facebook page. There, students can find out about upcoming events, read helpful articles and connect with other veterans.