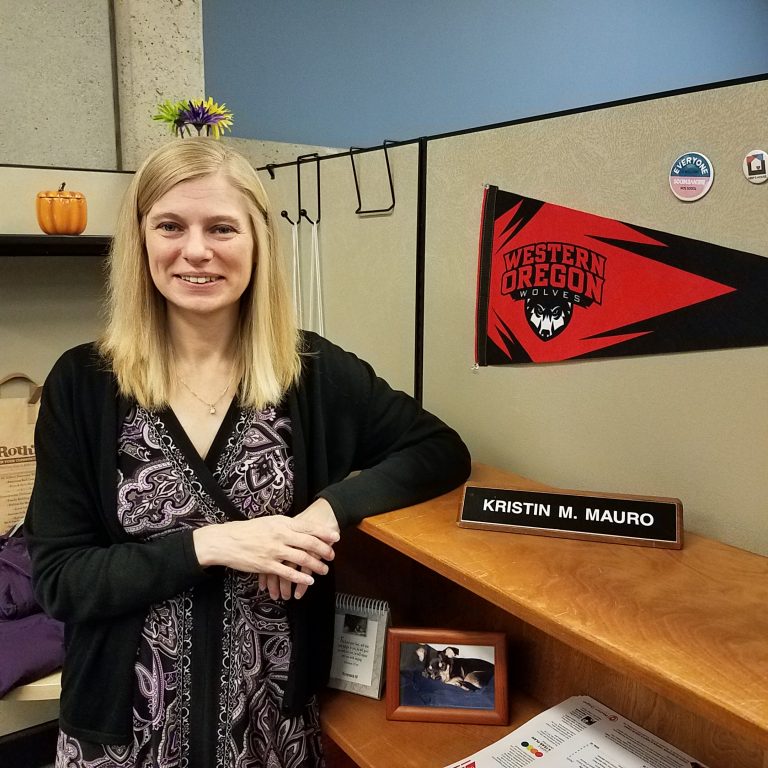 We are currently highlighting services that are tailored to three specific audiences: nontraditional students (Nov. 4), veterans (Nov. 9) and transfer students (today). There is a lot of overlap within these three groups, of course, so readers may qualify for multiple resources.

In cooperation with several area community colleges and in accordance with the new strategic plan, Western Oregon University is working towards its goal of becoming the campus of choice for transfer students. That mean the university is shifting resources and planning for the future to accommodate a rising number of students who have already got a few terms of college under their belts.

WOU is only a few months into the targeted effort, but already it seems to be paying off. Transfer numbers among students with junior status are up significantly compared with fall 2016. The university created a transfer specialist position last spring and chose Kristin Mauro, who is spearheading special efforts from Student Success and Advising.

Since the role is new, Mauro’s task list is ever-evolving. Right now, she’s working with the Registrar’s office to update WOU’s articulation tables and fielding questions from students of all statuses.

“I’m more of a triage person, in that students are referred to me either from the community college or our own faculty who have contacted me because (students) need questions answered,” Mauro said. “Right now it’s word of mouth, because people don’t always know I’m here yet.”

The time between when students are accepted to WOU and when they are assigned a faculty adviser is where Mauro is most active with incoming students – at least so far. She also spends a great deal of time talking at community colleges with prospective transfer students, helping them discover whether WOU is the right fit for them.

“The two things transfer students want to know is ‘How do my classes come in?’ and ‘How long am I going to be here?’” she said. The vast majority of transfer students come in with an Associate of Arts Oregon Transfer (AAOT) Degree, which means their general education requirements are met and their next two years will be dedicated to courses for their major.

The transition can be a little nerve-wracking at times, and that’s what Mauro seeks to help with. The students she’s worked with seem to appreciate her efforts.

“Kristin helped by reaching out and showing interest in the lives of transfer students,” said Chelsie Gray ’20, a biology major. “She made it very clear she wants to help make the transition smooth.”

Although many transfer students are also non-traditional students, not everyone falls into both categories. For those who do, additional resources are available on campus.

“I go into the non-traditional lounge to get a quick cup of coffee or just sit at the table and do homework before my next class,” Gray said. “I also use the (Student Enrichment Program) services.”

Transfer students with spouses and/or families who want to live on campus currently have two choices: the Alder View Townhouses and the Knox Street Apartments. A third option is planned for next year. Thirty-three transfer students will be selected for a live/learn community in Ackerman Hall, said Chris Kempton of University Housing.

Though the new residence hall option has been in the works for a while, it’s not the only new service that could be added. Mauro has several ideas percolating in her head, including a transfer-specific session during New Student Week that would focus on the transition from a two-year college atmosphere to a four-year university vibe.

“We had a session (with RAs) this year, but it was a mixed group with freshmen, too,” she said. “I was just too new in the position to get a transfer-only group. But that’s in my plan for next year.”

There’s already a Student Orientation Advising and Registration (SOAR) just for transfer students that happens in the late spring each year. The event gets the ball rolling on helping students understand course articulation and their roles in the WOU campus community.

Financial Aid oversees a collection of scholarships that are directed to transfer students. One, Jump-Start Plus, was created just last summer and targets Oregon Promise recipients. Mauro advises all students who want to attend WOU to apply early so they will be admitted before the general scholarship deadline rolls around on March 1.

Mauro also is mulling putting together a peer mentor group. Some transfer students have indicated it can be a little daunting to join a campus where a large portion of the population has already been there for a couple of years. It’s something ASWOU President Jessica Freeman wants to improve as well.

“ASWOU really focuses on transfer students and non-traditional students, anybody who feels they can’t be a part of campus because of their age or what’s going on in their life or whatever responsibilities they have outside of being a student. It’s so important to me that they get involved,” Freeman said.

Gray echoes that sentiment, advising her fellow transfer students to make connections on campus. “Try to get plugged into a group or club and ask a lot of questions. If you’re struggling, let someone know,” she said.

Mauro would be a good place to start on finding the right support system. “I would tell students that if they have questions but don’t know where to go, and they are not necessarily admissions questions, they can contact me,” she said.

The feedback about WOU’s transfer-specific efforts has been good during the short time they’ve existed. Mauro runs focus groups each term and asks participants specific question about their interactions with the university.

“In the transfer focus groups, I hear that students are so glad there is a ‘me’ on campus to help them,” Mauro said. “Several of them said, ‘Thank you for allowing this opportunity to just talk. Nobody’s asked me these questions before.’ They are happy that someone is talking to them and answering their questions and getting a perspective of what their transfer experience was like.”