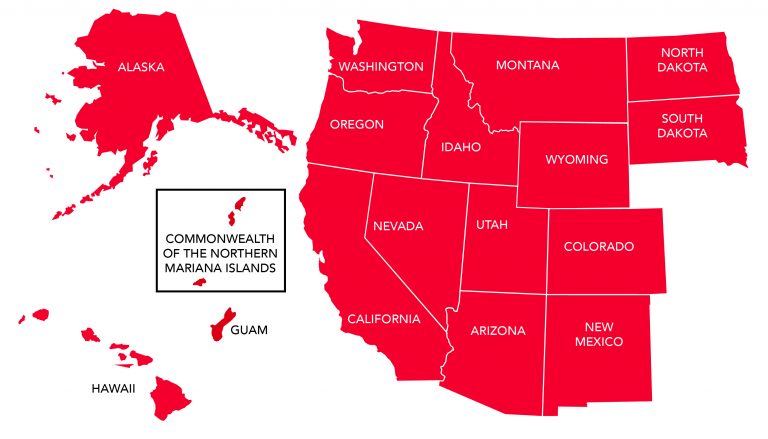 Western Oregon University has been an active member of the Western Interstate Commission for Higher Education (WICHE) for more than a decade, but Director of Admissions Rob Findtner still meets students who are unfamiliar with WICHE’s most popular program, the Western Undergraduate Exchange (WUE).

“You can never assume that people know,” said Findtner, who, like other members of the Admissions team, travels around the western U.S. telling families about WOU. “You just have to remind people ‘We’re part of the WUE system.’ And the students who do know what it is will often chime in, educating other students about it. That’s great when that happens.”

The 16 western states and territories that are within the WICHE region can also participate in other programs, such as online-only education offerings, programs for graduate students and exchanges for aspiring health care professionals. But the most popular option for undergraduates is WUE, which last year helped more than 38,000 out-of-state students get discounted tuition, according to the WICHE website.

Not every university in WICHE states and territories participates in the WOU program. In Oregon, for example, Oregon State University and University of Oregon have withdrawn from the program. For bigger universities, it makes less financial sense to offer a tuition discount, Findtner said.

“For large campuses, it can be a revenue loser,” he explained. “But a campus the size of WOU, it really helps in terms of boosting enrollment and diversifying our student population. It makes life so much easier for families who were looking for schools that have a WUE-friendly policy.”

WOU’s policy is especially generous, in keeping with the university’s core value of making a high-quality education accessible to more students. Not only do WOU students get the special tuition rate, they can also apply for the full range of WOU scholarships and even select the Tuition Promise guaranteed rate plan.

While other schools restrict the major programs that WUE students have access to, WOU does not set such limits. So students who are looking for an education degree, for example, but their in-state institutions don’t offer such a program, are welcome at WOU. Some universities also put WUE applicants into a sort of raffle for limited enrollment spots, and others require a higher GPA for out-of-state students. WOU’s inclusive offerings are part of its appeal.

“Families could say, ‘I’m going to go to the WICHE site and see who has WUE. OK, Western Oregon has it, and every major is available. As long as you are admitted, you get it.’ Seems like it’s a very friendly WUE approach,” Findtner said.

The open-door policy seems to be working. WOU currently has 785 students who pay the WUE tuition rate, which is about 15 percent of the student population. Most are from California, Hawaii and Washington, but there at least a few from most WICHE states. Colorado, in particular, seems to be a growth area. Kristin Mahoney is the Admissions team member who recruits in that state.

“A lot of the Colorado students are ready to travel, ready to go out,” Mahoney said. “Colorado parents were interested in the financials, and the students wanted to know which majors qualified for WUE. I get to tell them that all majors were covered, plus they could still apply for scholarships.”

Hawaii is another state that has embraced WUE and WOU, largely because high school guidance counselors on the islands are sure to tell students about the program. WOU has by far the highest percentage of students of Native Hawaiian or Pacific Islander heritage of any Oregon public university, including the state’s three large campuses.

Other Oregon regional schools such as EOU and SOU also participate in WUE. SOU draws heavily from California, especially residents in the northern part of the state. OIT, as one of few polytechnic universities in the Northwest, is a destination for students who want to go into a science field but don’t want to pay out-state-tuition at a non-participant school such as OSU or University of Washington.

Whatever the circumstances a student is in, WOU welcomes WUE students with open arms to the benefit of the university.

“WUE gives us somewhat of a competitive advantage when there’s a family from Colorado or Wyoming or even Washington that’s looked at PSU or OSU or some private schools and they see Western Oregon and see that, not only do we participate in WUE, but out-of-state students are still eligible for merit-based scholarships. We can put together a pretty competitive tuition package,” Findtner said.