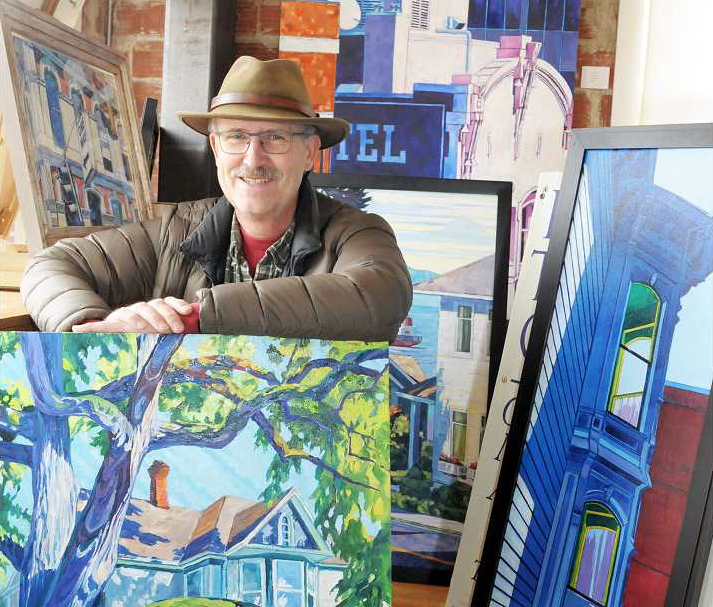 Gary Buhler has been a well-known name in the local art scene for three decades, particularly as one of the first participants in the popular monthly Art Walk events. But Buhler’s artistic connection to the Newberg area dates all the way back to his childhood.

GARY ALLEN – College Street, which he occasionally opens as a gallery to show his paintings and their distinctive style.

As a student at Central and later Dundee elementary schools, he recalls being asked to paint murals in the back of those buildings — later on, he would teach the entire George Fox University art department for a year.

The early artistry continued on into high school, and in college he took art classes and later earned a bachelor’s degree in art at Western Oregon University. He continued on to earn a master’s degree at the University of Arizona.

“I started painting seriously after that,” Buhler said, “and teaching when I could.”

Now, Buhler paints out of studio space at the Blue Trout Gallery on South College Street, which he occasionally opens as a gallery to show his paintings and their distinctive style.

Buhler developed a style he describes as post-impressionist with romantic and expressionist overtones.

“I like to work from nature,” he said. “Or from things that have a naturalistic component. I like to use color and shape and texture to contrast, to give my work the expressive component that I’m looking for.”

He particularly looks to paint a scene from an unusual point of view, he said, rather than what would be considered a standard picturesque point of view. It’s a view that “challenges the viewer a little, but is accessible if they want to enter into it,” he explained.

Buhler notes his work examines the relationship of positive and negative shapes, “based on design principles you would observe in nature.”

“I describe my work as a celebration of creation in many ways,” he explained. “Creation of God and nature, and also the things mankind can create: buildings, social organizations, towns and other structures of commerce and culture.”

GARY ALLEN – Gary Buhler paints with oil, watercolor and acrylics, and works on canvases big and small. Each medium, he said, has its own strength, and ‘it’s a challenge to learn to use them all effectively.’

He paints with oil, watercolor and acrylics, and works on canvases big and small. Each medium, he said, has its own strength, and “it’s a challenge to learn to use them all effectively.” For instance, acrylics layer faster, but watercolor provides a cleaner, more immediate medium. Oil painting, on the other hand, “is probably the most tedious, in that it takes a long time to dry.

“Sometimes that’s a great benefit and sometimes you can be tracking paint around for days,” Buhler noted.

Buhler has painted a variety of subjects, including many nature scenes as well as urban images from around Portland. Most recently he worked on a series of watercolors over the summer, painted in the plein air style that has the artist outside, creating the work on-site.

“The difference between the plein air and studio is the spontaneity,” he said. “When you’re working on location there’s a time deadline. You’re working with an urgency and a brevity that is necessary to capture a moment or moment of time, a short span of time. That energy, when it works there are unexpected happenings.”

Portions of his paintings contain a tight focus, but others are left purposefully more ambiguous, which is aimed at allowing the viewer to fill in the blanks. Buhler said this mimics reality, in which observation has the viewer take images for granted visually without noticing every minute detail in a moment.

“In a painting you can have that same type of experience,” Buhler sad. “So it becomes not a snapshot where it records every detail in one moment, but allows the viewing experience to be more like the actual experience of life, where you’re passing in time and your brain is filling in. You are contributing to your experience of living, and that type of living experience can take place while viewing a painting.”

After earning his master’s degree, Buhler returned to Oregon where his family lived, and painted out of his family’s home for a time, substitute teaching on the side. Then, he landed a job teaching watercolor painting at the University of Oregon, his first major university job.

Then, he recalled, he began “developing this style I am most known for,” which centers on wildlife settings, specifically fish in streams.

He returned to Newberg when a position opened up at GFU teaching art for a year. At that time, in 1989, “I was the whole art department for a year,” Buhler laughed.

The department grew when artist Doug Campbell joined. Buhler decided to stay in Newberg, showing his work in a gallery in Portland and another in Sheridan.

Newberg in 1990, he recalls, wasn’t quite as exciting as it is today. When the Coffee Cottage opened in the early 1990s, he began visiting it regularly on breaks from working in his studio. Shortly afterward, Buhler was involved in the first Art Walk event in Newberg, alongside proprietors of the Coffee Cottage, the Newberg Gallery (now My Personal Framer) and Cusick Picture Frame.

“Four of us were the initial Art Walk,” Buhler said. “Then it started to grow and it’s become a big thing.”

Buhler purchased the studio space on College Street in 1999, and began fixing it up to become the Blue Trout Gallery, where Buhler paints and displays his work during the Art Walk events. He continues to paint out of the studio and is still evolving the space. In the coming year, for instance, he is planning to use the gallery as an internship space for local arts students.