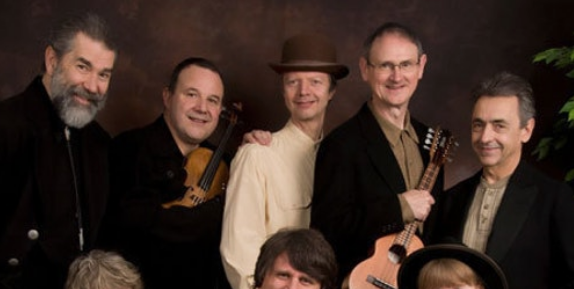 The NW Natural Holidays with the Trail Band concert series benefitting Friends of the Children returns to the Aladdin Theater!
This is a unique event that attracts music lovers throughout Oregon. The band’s selection of classical and modern holiday music will get you into the holiday spirit. See for yourself why so many people make this their holiday tradition year after year!

When you purchase your concert ticket you will be supporting Friends of the Children- Portland. Last year alone, Trail Band raised over $75,000 to support our community’s most vulnerable children.

The Trail Band is an eight-piece ensemble that creates an energetic blend of brass and string arrangements of traditional and original music featuring five great vocalists including Quarterflash’s Rindy Ross. Hundreds of public and private appearances across America and Japan, plus seven successful albums have established The Trail Band as the premiere historic music ensemble from the Northwest. Cornet, tenor horn, tuba, fiddles, hammer dulcimer, guitars, penny whistle, mandolin, piano, saxophone, spoons, bones, drums, bass, and recorders combine with their rich vocal harmonies to create a diverse tapestry of sound.

Formed by Marv Ross in 1991 at the request of the Oregon Trail Council to commemorate the 150th anniversary of the trail, the band initially performed music exclusively from and about the era of the Oregon Trail with costumes, diary readings, traditional folk tunes, marches, hoedowns, and Native American melodies. Titled, Voices From The Oregon Trail, this performance has been the keystone of the band’s repertoire for over 10 years.

In 1998 The Trail Band was presented the Meritorious Achievement Award by the Oregon-California Trails Association. In 1999 producer Marv Ross was presented an Alumni Award of Excellence from Western Oregon University for The Trail Band’s contributions to history, education, and music.

In 1994 The Trail Band created a new show, Christmas With The Trail Band — a holiday concert reminiscent of the parlour orchestras and townsquare brass bands of the last century. Originally produced as a television special for Oregon Public Broadcasting, this concert has become an annual tradition for thousands of concert-goers in the Northwest.

In 1998, the band presented a new show and album, Immigrant Dreams, featuring music and stories of those who came west to America from Ireland, Scotland, Romania, Mexico, France, Spain, Greece, and other countries during the turn of the century. In 1999 The Trail Band debuted a new show and accompanying album, Lewis & Clark, and in 2001 the band released its seventh recording, a Christmas album titled, Making Spirits Bright.

In 2003 The Trail Band released its eighth recording, Oregon Stories, a contemporary collection of original songs tracing the lives of Northwesterners and their relationship to the land.