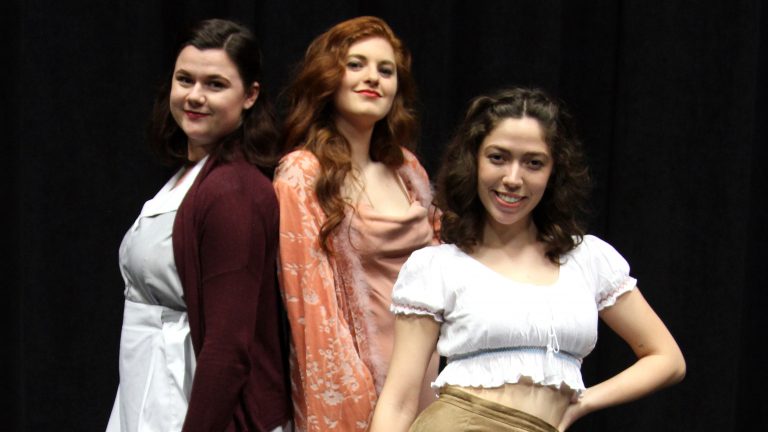 Western Oregon University’s Theatre Department will be presenting the classic musical The Best Little Whorehouse in Texas on March 1-4 and March 7-10.

The musical, first performed on Broadway in 1978, is based on a book of the same name by Larry King and Peter Masterson. Much of the music and lyrics, created by Carol Hall, were considered racy, but that didn’t prevent the musical from garnering several Tony Award nominations – and two wins — in 1979. The Best Little Whorehouse was made into a movie starring Dolly Parton and Burt Reynolds in 1982.

The WOU production features a large cast of about 25 students and is directed and choreographed by Theatre Professor Sharon Oberst. Assistant Professor Ted de Chatelet worked as the dialect coach, and Solveig Holmquist is the music director.

“In addition to being funny and entertaining, this musical addresses themes that are relevant today, namely moral and political hypocrisy and media sensationalism,” Oberst said. “Other themes in the show are touching, personal and very human about unrealized dreams, choices made, the passage of time and loves lost.”

The madam of the Chicken Ranch brothel, Miss Mona, will be played by Lindsay Spear (Portland). Gabriel Elmore will portray Sheriff Dodd (Salem). Nearly every cast member fills multiple roles, with one male student playing a total of six characters.

“The theatre, music and dance students at WOU are well-trained, and this show allows them to demonstrate their skills in acting, singing and dancing,” Oberst said. “Although there are terrific lead roles in this musical, this is an ensemble show that relies heavily on the strength of every member of the cast.”

The themes and language in the musical are suited for a mature audience. Performances will be 7:30 p.m. March 1-3 and 7-10. A 2 p.m. matinee will be March 4. Tickets are $14, $10 for seniors and $8 for students with ID. They are available in person, by phone at 503-838-8462 or by email at boxoffice@wou.edu. The Friday performances will feature American Sign Language interpretation.