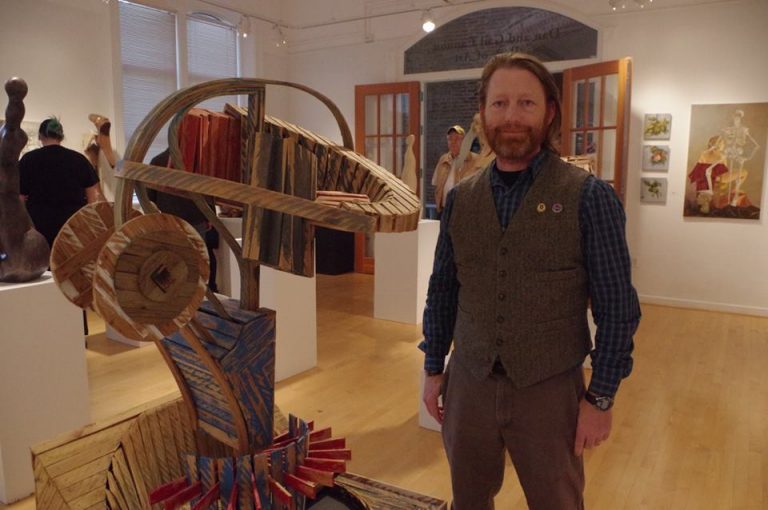 Eric Frey ’19 describes himself as soldier, scholar, veteran and artist. So much so, in fact, that those four adjectives form the title of his latest art exhibition, which opened Feb. 19 in the Werner University Center and runs through March 4.

Frey served more than 20 years in the Army before retiring from the service and enrolling at Western Oregon University. During his first term here, the Dallas resident changed his major from business to art, and he’s never looked back. Despite his status as a relative newcomer to the art community, he has garnered a lot of success, admiration and support from the WOU community. His work demonstrates a unique brand of thoughtfulness and imagery that seems to reflect not only his years in the military, but everything life has taught him in the interim.

You may have seen his work behind Bellamy Hall. The piece, called Wreakreational Fishing, is an assemblage that manages to meld ideas around fishing, military repercussions, environmental degradation and the passage of time.

We sat down with Frey to learn a bit more about his influences and motivations.

Tell us a little about your background. Where are you originally from, and what made you decide to enlist in the Army?
I’ve lived in Dallas since 1998, but I was raised in West Linn. From the time I was in Cub Scouts, I wanted to serve in the military. I was in Civil Air Patrol in High School and planned on going Air Force. In 1992, I was failing out of high school, and the Army National Guard offered me high school credits to go to basic training between my junior and senior year. So I joined the Oregon Army National Guard 41st Separate Infantry Brigade as an infantryman.

Describe a little bit about your time in the military. What made you move on?
My time in the Army was diverse and rich in experience. I fought forest fires in Eastern Oregon. I deployed to the Sinai Peninsula for six months of peacekeeping, and then worked on flood relief and forest fires back in Oregon. As a member of the Guard Reserves, I served as both infantryman and Chemical Operations Specialist. In 1997, I became Active Duty Guard and eventually went on to work at the Umatilla Army Chemical Depot as part of a Homeland Defense mission to guard the chemical weapons until they were destroyed. A few years later, I deployed to Iraq for Operation Iraqi Freedom. After that, I was sent to Thailand to work logistics support, and I eventually ended up in Afghanistan in 2014.

When did you first know you might want to be an artist?
I didn’t know I wanted to be an artist until my first term at WOU. I was taking Intro to 2D Design, and Professor Kim Hoffman suggested I consider taking more art classes. During fall 2016, I changed my major from business to art.

Were you always interested in sculpture and photography?
Sculpture was a surprise to me. I have always built things, but Professor Hoffman offered to let me into his Intermediate Sculpture course after seeing my design style and dedication to craftsmanship. I have dabbled in photography since I was a kid, but I picked up my first DSLR after I got back from Iraq, and my initial plan was to become a professional photographer after graduation. Since then, I have been accepted into several international photo salons and local competitions.

You talk about the struggle to make the transition from soldier to student. Can you elaborate on that?
Transitioning from the structure and stability of a military life to that of a college student was a challenge, especially since school schedules change frequently. Plus, the speaking style between soldiers is considered rude, gruff or offensive in a civilian setting. The shift in pay was a major transition too. When I retired, I was a senior logistics manager making more than $80,000 a year. When I retired, the pay dropped to about a third of that. Fortunately, the GI Bill covers my tuition, so I can go to school and pay the bills.

Another difference is that in the military, you know your career path and what is expected of you. As a student, even though there is a degree plan, the path to graduation is much more fluid, flexible and often self-destined. You also miss out on the military comradery when you are out. Fortunately, the Student Veterans Center on campus helps with that fellowship.

Does making art help with the transition?
For me, yes. It gives me purpose and lets me explore what can be, creating things that never existed before. Mostly art helps with my PTSD. It gives me an outlet to focus my energy on and not focus on the traumatic events that I witnessed overseas.

What do you hope fellow students will take away from viewing your work on campus?
Three things: 1) Embrace change. Transitions happen all throughout our lives, and many times the path we start out on leads to somewhere different than where we thought we would go. 2) Understand the sacrifices veterans make when they swear to uphold and defend the Constitution. It isn’t just lives lost in a far-off land. It’s also the personal sacrifices such as time away from family and loved ones, missed births, birthdays, anniversaries, and even deaths of family members all in service to something greater than ourselves. 3) Take advantage of every opportunity while in college. You never know when you will discover hidden talents or abilities.

How has WOU supported your artistic endeavors?
WOU has given me opportunity. I’ve been able to find facilities and faculty who support creating art. At WOU I have faculty and peers who have pushed me out of my comfort zones and encouraged my growth. There is a climate here that encourages pursuit of the arts.

Which faculty and/or staff have been instrumental?
The list is long. The entire Art Department has found ways to support my endeavors, and I constantly receive support from professors and staff outside the department as well. The four most instrumental are my friend and sculpting mentor Professor Kim Hoffman; Professor Becca McCannell, who helped promote veterans and art working together; Professor Henry Hughes, who funded and helped work on my Wreckreational Fishing sculpture; and Professor Paula Booth, who encouraged me to put together my current show. Others who have encouraged me and pushed me into art are Professors Diane Tarter, Sung Eun Park, Mary Harden, Greg Poulin, Dr. Michael Freeman and former Professor Ian Factor.

What is your favorite creative space on campus?
The WUC without a doubt. I love walking through and seeing the art collection that Student Engagement has purchased to make part of the permanent collection. Every year, they choose one piece to purchase from the student show so you get to see the history of the university’s art program everywhere in the WUC.