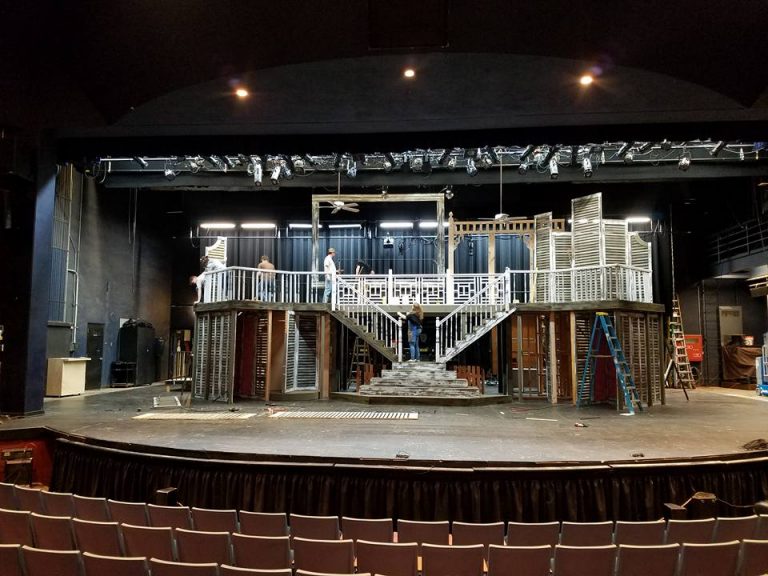 The Best Little Whorehouse in Texas was not a place of fiction, it indeed existed under the name of Chicken Ranch. The prostitution started in the great depression as a way for the farm to survive, trading services for goods, eventually leading to the excess of chickens thus giving the 12 acre farm its name. In 1960, the brothel reached its height of fame and was put under attack of people desperately trying to close it. The play highlighting this story, based in La Grange, Texas, started in 1978 and ran for a whooping 1,584 performances earning multiple Tony Awards. The musical was later adapted into a movie featuring Dolly Parton in 1982.

Let us meet the people that make Western’s production of The Best Little Whorehouse in Texas come alive.

“It is beautiful chaos,” Kintz said, describing what it was like to work with so many people. “There is never a dull moment, someone is always entertaining and it makes the process fun and enjoyable.” Being backstage means that while Kintz’s job is mainly microphones, she will also be adding in quick changes and some props, which she said can get a touch overwhelming and turn into a bit of fiasco. Though it wouldn’t be a show if it wasn’t a least a bit stressful. Working with such a diverse group of people has its challenges, but it also a joy. Out of all of the songs in the musical, it was Girl You a Woman that caught Kintz’s attention the most. She described it as, “Beautiful, like something baking or delicious chocolate.”

“Costumes can be a lot to keep track of. There are a lot of little pieces that can be easily lost or switched around that would cause a problem. But, that’s why we label everything in the costume shop. It helps ease some of the confusion,” Connors said. Some of the costumes are made in house on our sewing machines with the brilliant work of our seam shop worker. On top of the costume process, Conners also designed the lights you will see light up the show. Conners picked the more amusing songs as her favorites with The Aggie Song and The Sidestep.

John Bryant – The Governor of Texas and Ensemble

Bryant, one of the actors in The Best Little Whorehouse in Texas, described his experiences working with everyone. “It can be really fun working with a big cast because you get to know a lot of people and you become like a big family.” He added that the increased number of people lead to tighter quarters and a crowded space, making it harder to work at times. This means that sometimes specific props or costumes aren’t where they should be if no one is paying attention. Besides the governor of Texas, Bryant also plays an Aggie, a cowboy, and a spectator. Being so involved in this musical has changed some of Bryant’s views on musicals. When asked what his favorite songs are, Bryant said, “My favorite song is between two songs. One of them is The Side Step, which includes my solo and I’ve fallen in love with it the more I perform it! The other is She’s a Good Ole Girl. It’s more of a ballad and I’m a sucker for ballads.”

“Working with a big cast is  definitely a change of pace for our department. It has been fun to be involved with such a diverse group of people. We have really come together as a cast and I am so proud of what we have accomplished. It is really fun to sing and dance with so many incredible performers,” Parker said. She went on to comment that while they have come together at times, it has been difficult when not everyone is on the same page. But luckily the stage manager has done a good job fixing the communication.

Parker said there’s one problem that can’t always be fixed by simple communication. “Another problem we encounter often is on-stage traffic jams. With a cast this large all trying to enter and exit the stage at the same time, we often run into each other. It looks like chaos!” Luckily with practice this shouldn’t be too much of an issue. The costumes are the last hurdle that Parker has had to face, the show includes hundreds of costumes with all of the characters combine. Being someone who greatly enjoys the experience of musicals Parker found The Aggie Song to be her favorite noting, “The boys are killing it every time they perform it and the energy just fills up the room.”

The show runs for two weeks with 7:30 p.m. show-nights on March 1, 2, 3, 7, 8, 9, and 10 with a 2 p.m. matinee on March 4. You can get tickets by calling the box office at 503-838-8462, by e-mail at hrenchukj@wou.edu or at the box office window in Rice Auditorium room 101. The performances on both Friday, March 2 and 9 will be interpreted in American Sign Language. Ticket prices are $14 general admission, $8 Students with ID and $10 seniors/faculty/staff. Note: there will be alcohol, gun shots, strong language, and mild adult themes in the show.