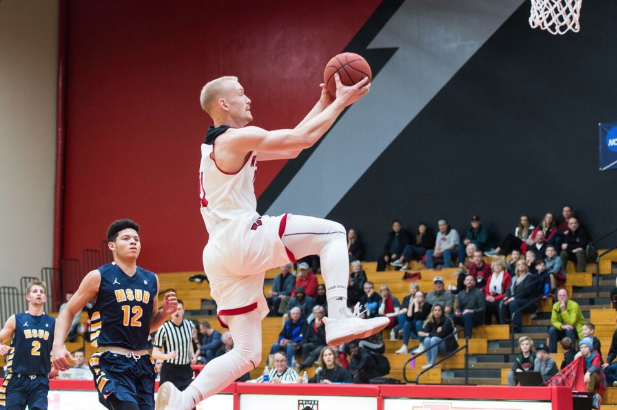 MONMOUTH — The best basketball team you don’t know about is led by a player who, except for a series of fortuitous events, almost never arrived on campus.

It took a snub, a cross-country trip, a hurt knee, and a connection going back to a spring break trip in the 1980s to lead Tanner Omlid home and his Western Oregon Wolves back to the Division II NCAA tournament.

“It turned out for the best,” Omlid said.

The Wolves, winners of their conference’s regular-season and tournament titles, will attempt to extend a 22-game winning streak that is the NCAA’s longest at 7:30 p.m. Friday when they open the tournament’s West Region on their home court.

The winner of the single-elimination, eight-team regional advances to the Division II round of eight March 20 in Sioux Falls, South Dakota. Western (29-1) is seeking its second Final Four berth in three seasons under coach Jim Shaw.

In their style, scheme and personnel, the differences between WOU’s 2016 team and this year’s are stark. But a constant on the court in that span has been Omlid, the 24-year-old senior whose goateed face is on a poster outside WOU’s arena.

Omlid leads Western in points (13.6), rebounds (6.5), assists (3.1), steals (2.6), blocks (1.9) and the knack to influence a game without needing the ball. In just three seasons at Western, he is the program’s career leader in rebounds, steals — he once collected 11 in a single game — and blocked shots. Twice this season, he has accomplished a rare five-by-five by recording at least five points, rebounds, steals, blocks and assists.

Omlid’s teammates call him “gramps.” He graduated from high school six years ago. Last summer, he became a new husband and homeowner. The household includes a dog and cat, too.

His coach calls him something else.

“Tanner will go down as one of the best players to ever play here,” Shaw said. “There’s no question.”

And yet, there was every reason to question out of high school whether he’d ever play here, let alone become this season’s conference player of the year.

Despite winning two state titles and earning Oregon 4A player of the year honors at Central High School, just two miles east of Western’s campus, Omlid’s interest in WOU was rebuffed. During a recruiting visit, Omlid said he was told by the team’s former coaching staff that they were unsure he was good enough for Division II.

Instead, his lone season of AAU basketball earned him a spot at Division I West Point. After a year of prep school, he ranked among the nation’s top leaders in steals as a freshman in 2013-14. He has no regrets about going to Army, a place where he said he was forced to “cut the umbilical cord” and grow up without the aid of family or the small-town atmosphere he was accustomed to.

He likely would have stayed and been commissioned into a combat arms branch of the service after graduation, had he not injured the patella tendon in his right knee as a sophomore. His career track in the service promised lots of physical labor, rucking heavy packs.

As a matter of practicality, not homesickness, he began reconsidering his future.

“On a bad knee, I probably would have had to go 10 years and get a knee replacement,” he said. “It’s either I do that and continue to have knee problems the rest of my life, or I be a teacher and enjoy being with my family.”

He committed to transfer to Oregon Tech and play for iconic coach Danny Miles.

Then Shaw, acting on a tip from an assistant, intervened.

Shaw met Omlid’s parents more than 30 years before at Western Oregon, when all three were students. Before he became an All-American as a senior in 1985, Shaw once spent a spring break with Omlid’s father and a mutual friend in Palm Springs. His career also overlapped with Omlid’s mother, Allison, who played with the women’s team.

Shaw went on to coach at Oregon State alongside Jim Anderson, at Oklahoma under Kelvin Sampson and at Washington, for nine seasons, under Lorenzo Romar. It was his return to WOU in 2015 that made Omlid’s father suggest to his son that he reconsider his transfer destination.

The recruitment lasted all of five days before Omlid decided to come home, three years after leaving.

“Shaw is a basketball savant,” Omlid said. “I feel like a lot of coaches try to create roles for their players. Shaw recruits players with roles and then maximizes their roles all together. He’s like the ‘Moneyball,’ the Billy Beane of DII basketball.”

Together, they have helped the Wolves put together two of the most successful seasons in school history, a run that wouldn’t have been possible without Omlid, the forward who plays bigger than his 6-foot-3, 215-pound frame.

For this, Omlid credits his upbringing. Summers were spent on Kodiak Island in Alaska, where his father’s side of the family owns a fish camp. When Omlid entered the seventh grade, he was put to work, waking at 5 a.m. before leaving on a boat to set nets for red salmon. Nets were picked several times a day, three days each week and moved on the fourth day. Omlid isn’t weight-room strong; barely benching 200 pounds. But he estimates he rips at least one steal a game out of an opponent’s grasp thanks to hands strengthened on the waters off of Kodiak.

“There’s a difference between weight-room strong and being a man,” Omlid said. “There’s man strength. I feel like I have man strength.”

Perhaps it should come as no surprise how Omlid spent last summer. On weekdays, he watered nine fields at a Harrisburg sheep farm owned by his wife’s grandparents by moving 30-foot sections of aluminum irrigation piping. After his shift ended, he drove to Monmouth three nights a week to work out with teammates. On weekends, he played against Martell Webster, Spencer Hawes and Pac-12 defender of the year Matisse Thybulle in a Seattle pro-am league run by NBA veteran Jamal Crawford.

On his first day, during an open gym, he drove past Thybulle before the long-armed Husky easily blocked his layup off of the backboard. Lesson learned: “I was like OK, this is another level,” Omlid said.

He made enough of an impression to earn an invite into the league, where he adjusted to the longer, more athletic opponents as Shaw watched from the stands. It’s paid off this season with an improved handle and ability to get his shot off against bigger opponents.

“Basketball is basketball,” he said. “I just had to show up and do what I do and then they respected me after that, like who is this 6-3 white boy? They’re all like 6-6. They were like, all right, this guy can actually move a little bit. He can hold his own.”

Now, Omlid and the Wolves want to prove they belong on the national stage.

But first, Omlid had to show he could hold his own in a different setting.

After an interview on campus last week, he drove two miles east to Independence to volunteer at the Ash Creek Elementary after-school program run by his wife, Catherine — one he calls a “slick little deal.”

He’s long since given up trying to get the kids to play basketball. And yet, on this day, one of the conference’s top defenders still found himself anticipating shots with strong hands and a sixth sense for anticipation.