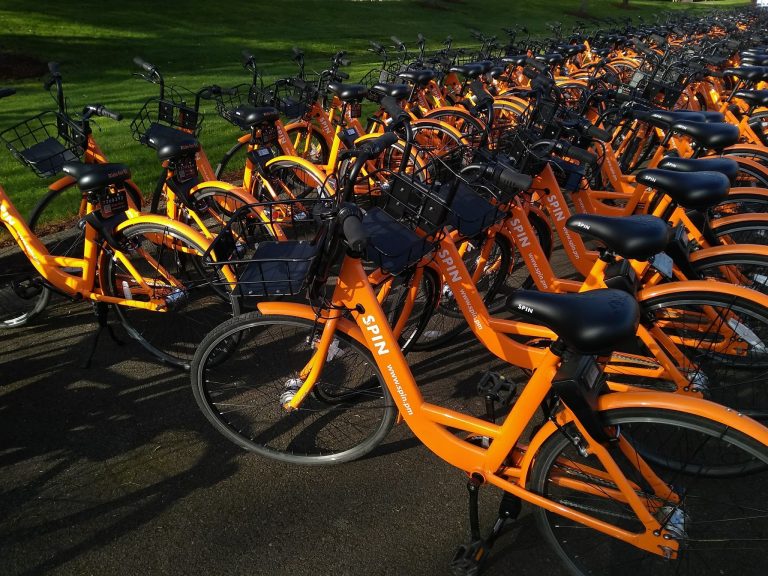 Starting this week, the Western Oregon University campus community will being seeing orange and wheels.

About 100 orange, dockless bikes will appear on campus streets, available for use by anyone who has downloaded the app provided by Spin (search “Spin bike” in your app store), the company that supplies the bikes. With an .edu email address, it will cost only 50 cents to use a bike for half an hour, or users can spend $14 per month for unlimited use.

“We hope that this bike share program will give students a quick and easy way to get from one end of campus to the other, to run errands around town or to take a leisurely ride during the weekends,” said Student Enrichment Program Director Marshall Habermann-Guthrie, who was instrumental in bringing Spin to WOU.

The bikes will be located at racks throughout campus, and each contains a GPS device that tracks its usage. Students and employees simply start an account on the app and when they want to rent a bike, they log in to find the closest option. To unlock a Spin bike, users scan a QR code on the bike from within the app. After reaching a destination, riders relock the bike with a lever, thus “ending” the session.

The Spin bikes are intended as a service for rides starting and ending on campus, but users can ride the bike home to their nearby apartment or go to the grocery store before returning the bike to university grounds. Each bike features a basket big enough to hold two grocery bags. Spin Bikes must be left parked at or within a few feet of a bike rack on campus by the end of the day.

“We are so excited to bring something like this to WOU and hopefully make it a little easier to get around campus” said Habermann-Guthrie, himself a cycling enthusiast.

Over time, Habermann-Guthrie said, the company will track the zones where bike pickup is most popular. It will then hire students to relocate some bikes to the high traffic areas.