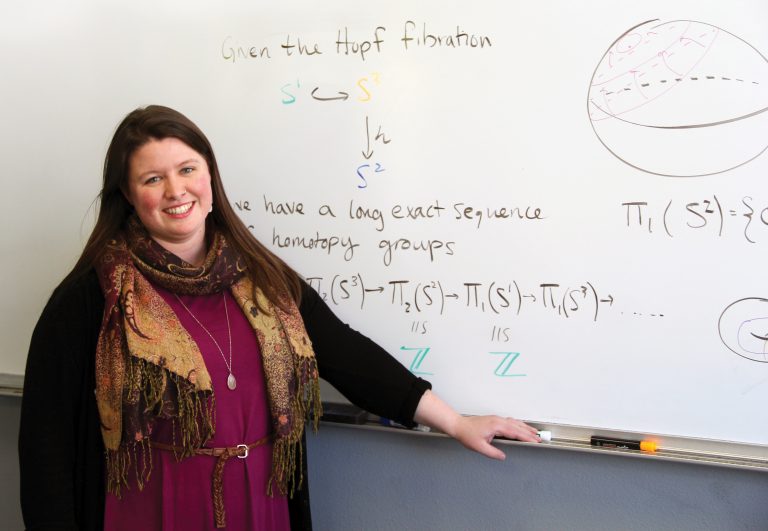 Assistant Math Professor Leanne Merrill, 29, joined the Western Oregon University faculty in September, just weeks after defending her doctoral thesis and, oh, yeah, getting married. The upstate New York native may be young, but she has an interesting story that illustrates the importance of challenging oneself and keeping an eye on the prize. We sat down with Merrill in a noisy Java Crew coffee shop to hear more about what brought her to WOU.

I started college when I was 17. I’m from upstate New York originally, so I went to the State University of New York at Potsdam, which is really similar to WOU in size and degree programs. I started in music education and vocal performance. I wanted to be a singer because I was into all kinds of music. My fallback plan was to be a music teacher, which was what my dad did. Both my parents are super musical.

So how’d you come to focus on math, then?

I’d taken math in high school, and I was good at it, but I didn’t really get why someone would want to know about math unless they cared about science, which I didn’t. But I had to sign up for classes late, and there were no open classes really, so I signed up for calculus to fill that graduation requirement. It was that teacher, during my freshman year at college, who basically got me hooked.  The teacher showed me how math could be creative and interesting. I started thinking about switching to a math major, and at the same time I was looking at a program that allowed students to get a bachelor’s and master’s concurrently.

I came to a realization. It was 2008, and people weren’t getting jobs as professional singers. And I like kids, but I didn’t want to have 30 of them in a class at a time. Older learners are more my style. So I switched to being a math major. My parents were surprised, but supportive…eventually. I still got a music bachelor’s degree, too, though.

Did you realize at the time that being a woman in a male-dominated subject was notable?

Actually, at the time, I didn’t. The math department at SUNY was really gender balanced. It wasn’t until I was getting my doctorate that I really understood it. There were zero female faculty members in the math department when I arrived at U of O. When I graduated, I was the most senior woman in the math department. I started the Association for Women in Math, which is a national organization, but we started a chapter there. We brought in female speakers that were mathematicians.

What brought you to Oregon?

In the third grade, we had to do a project where we were all assigned a different state to do a report about. It was a written report and an advertising skit-type thing. I probably pronounced it “or-eh-GONE,” and I distinctly remember saying “WILL-uh-met.” I had no idea! At that moment, I decided, I’m going to live in Oregon when I grow up. Now that I live here, I know that Oregon is the place for me.

When it was time to get my Ph.D., I immediately looked to Oregon. It helped that the University of Oregon had the exact program I wanted: algebraic topology.

What exactly is algebraic topology?

It uses the tools from abstract algebra to study shapes. Think about topography like on maps—“topos” means “shape”—topology is that study of abstract spaces. It melds geography and algebra together. The applications of algebraic topology research are mainly within physics. There’s a little in biology, too, and data science—especially in the last 10 years.

I have to be honest and say it’s so much better in New York. It’s beautiful in towns in Oregon, but when you go outside, it’s all evergreens. In upstate, everything is deciduous, so there’s just so much more color. It’s red and orange and yellow on all the hills, as far as the eye can see. That’s the season I miss most.

How did you manage to pay for 11 straight years of college?

I had scholarships for my undergraduate. But I also worked 30 hours per week. I worked retail during the summer. I worked in the Admissions office on campus. I worked at a bagel place, a pool hall, some tutoring. I picked strawberries once. I walked a LOT of professors’ dogs. When I was getting my doctorate, I had a graduate teaching fellowship, so that paid tuition and I got a living stipend.

Did you manage to have a social life in grad school?

I dated unsuccessfully for a number of years, and then I met Nick. And now we are married. He’s from California, and he’s a butcher. In Eugene, he was working for Whole Foods, opening all their stores in new places. I met him nine days after he moved to Eugene. I thought I’d be moving soon, because that’s how academia works. You don’t get to choose where you go. I wasn’t expecting anything serious when we met, but eventually I knew I wanted to stay here. That’s why it is so crazy that I found this job at WOU, which was so close to Eugene.

“I’m so glad that WOU has a successful Sonia Kovalevsky Day tradition, because encouraging high school girls to pursue math and science is of the utmost importance. Girls tend to outperform boys in mathematics through elementary school, but their performance declines in middle and high school. No one knows quite why this happens, but many people believe it’s because girls think it’s not “cool” or “attractive” to be good at math. By showing girls that math can be cool, fun, and useful, and showing them that women can succeed and be happy in STEM careers, we help them overcome those stereotypes.” ~Leanne Merrill

We love it. My husband couldn’t stay with Whole Foods because he didn’t want to commute to a Portland store, so now he’s working as a chef in town.

Most of my travel—besides trips back to New York or down to California to see my husband’s family—has been enabled by going to conferences. As a female in math, I get a lot of encouragement and grant opportunities to attend conferences. I’ve been to New Orleans and Chicago. My favorite has been in Switzerland, where we had a little ski lodge. It was really small, but we had a seated meal every night. It was nestled in the Alps. You walked outside and expected The Sound of Music to start happening or something.

What is the link between music and math, in your mind?

It’s interesting because math can be super creative, like music. And music is incredibly mathematical. I think people who read music do better at understanding fractions.

You have a tenure-track position. That process generally takes seven years. What are your plans for that time?

I would like to buy a house five miles from town and have a goat and maybe chickens. Another thing I do is brew beer—well, more my husband—but I’ve been learning. I am deeply motivated to participate. Two ideas that I have for fun courses in the future are “math and music” and “mathematics of brewing beer.” I probably will teach a topology class soon, too.

Which classes are you teaching now?

I’m teaching Math 110. It’s called Applied College Math, and its intent is to be a replacement for Math 111, which is a pre-calculus class. Many majors require students to take pre-calculus but don’t require them to take calculus. So Math 110 helps people in other majors such as business or criminal justice so they can look at a graph or some text that has data and make relevant conclusions from that. They need to understand basic concepts like ratios, percentages, proportions and the relationship between variables.

I’m also teaching Calculus II, which is Math 252. That’s for math majors and chemistry majors. I’m also advising four senior projects, which is a class. They are really excited about their projects, and they are going to present them at the Academic Excellence Showcase.

Have you found your favorite spot in Oregon?

I really love Odell Lodge. I spent a lot of time there in college. On my first date with my husband, I suggested we go to the beach and watch the sunset, but by “beach” I meant Fern Ridge Reservoir, which is in west Eugene. There was a park there, and the sunset was really nice. We saw a heron. That’s also where I proposed to him.

It was in our backyard in Monmouth. I made the cake, and he made all the food. There were nine people at our wedding. We had one of our friends take pictures. One of our closest mutual friends married us. In retrospect, I’m glad we did that instead of just going to the courthouse, like I originally wanted.

Cats. We have two. It was a Brady Bunch situation. My husband had one, and I had one. Their names are Jade and Poe. They occasionally eat my students’ homework if I leave it on the coffee table.

Do you have a fun fact about yourself?

It just happens that my great aunt is super into genealogy, and I can trace my family all the way back to the ship that came after the Mayflower to Massachusetts. My family has been in the country since the 1650s. I know all the names and where they lived. Before that they were from England.

What was the most surprising thing you learned about Oregon when you moved from New York?

I was very surprised to find that people would talk to you while you are walking down the street. Occasionally that meant they were crazy, but it usually just meant they were friendly. If someone talks to you on the street in New York, you literally run in the opposite direction. Even in upstate. The beach is really different, too. You can’t lay on the beach in a swimsuit here. The idea of “going to the coast” without it meaning “going swimming in the ocean” is very strange to me.

What’s an interesting thing about you?

I love Oregon so much, I have the state motto tattooed on my wrist. I have New York on the other wrist. It helps me know my right from my left, which is another interesting thing about me. I don’t know my left from my right.