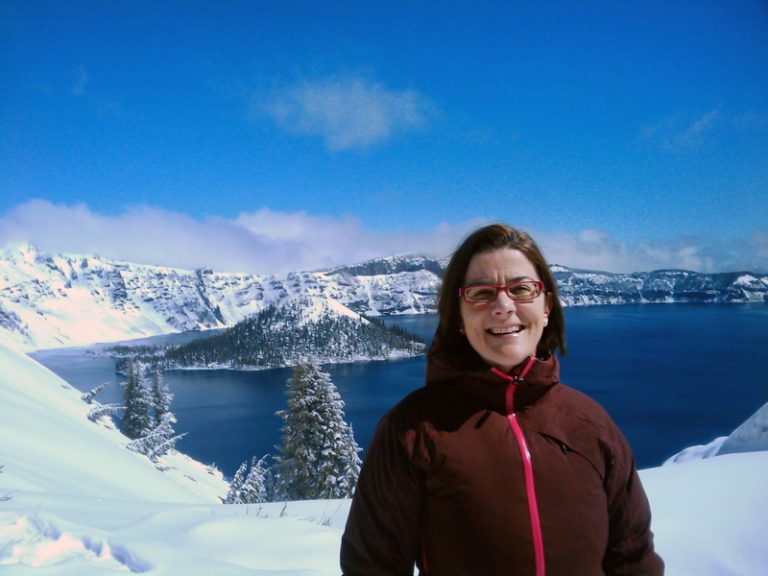 Associate Professor of Spanish Linguistics Patricia Giménez-Eguíbar does a decent amount of traveling for work and pleasure, and two of her trips in the past year have been to conferences where she was representing Western Oregon University as keynote speaker.

Giménez-Eguíbar teaches Introduction to Spanish Linguistics, Spanish Pronunciation and Phonetics, Spanish for Heritage Speakers and other language-related topics to WOU students. Her expertise encompasses different aspects of the education she received before coming to Monmouth. A native of Salamanca, Spain, Giménez-Eguíbar got her bachelor’s degree there before earning a scholarship to attend the University of Wisconsin in Madison. While earning her master’s and doctoral degrees there, she fell in love with Wisconsin.

“It was great,” she said. “I could say that it was the time of my life. I learned a lot about myself, about everything, about another culture. It was a fantastic experience. My favorite place was the library.”

Giménez-Eguíbar eventually went back to Spain to write her dissertation. She also gained a husband while she was there. She recalled being treated as a bit of an outsider when she returned to Spain after many years in the U.S.

“They called me ‘The American,’ ” she recalled. “When I got home I thought, ‘This is not my place. Where is my place?’ ”

Perhaps, she thought, her place was back in the United States. She interviewed for a job at WOU and really loved Oregon. Her husband did, too. They decided they could be happy here, and she started teaching in Monmouth in 2011. She achieved tenure in 2015, and her husband earned his master’s here.

Last September, she returned to Wisconsin as a keynote speaker for the Lusophone and Hispanic Linguistics Symposium. The word “Lusophone” denotes the Portuguese language, which had been the topic of her minor when she was an undergrad in Salamanca.

“At the conference, I talked about linguistic contact between the Spanish culture and the Muslim culture and the relationship between Spanish and Arabic (languages) in history,” she said.

Before that, in June 2017, she had returned to Spain for another conference. At this one, her keynote address was about the phenomenon among American Latinos in which they are seeking formal education in Spanish because they are verbally fluent but struggle with vocabulary and written Spanish. WOU’s Heritage Speakers program helps prepare students to be successful in the job market.

“The best thing about WOU is that we work in really small classes so we are really focused on students and making them feel respected about their language skills, not ashamed,” she said. “We appreciate the Spanish that they have, and then we work with them to have really good standard Spanish skills.”

She estimates that in the Spanish language classes she teaches, 75 percent of the students are Latino. They are eager to be able to tout their bilingual skills, but they need the higher-level Spanish to be able to thrive in an employment situation.

“Latino students are very connected to anything that is Hispanic,” she explained. “The problem is that in this country, they have to forget the Spanish in order to integrate themselves in the American culture. But at WOU, they are peace with both. They can connect with their Hispanic roots while being successful Anglo-Americans. It’s a really holistic approach.”

Giménez-Eguíbar continues with her linguistics research at WOU, looking for partnerships that can extend any project’s impact. Right now, for example, she’s working with other universities across the country and in Mexico to take an inventory of documents in U.S. libraries and government archives that are in Spanish. By doing so, the group can demonstrate that the country already has thousands of Spanish language documents in its history, proving that Spanish is a historical language that was present in these territories decades before the U.S. was a country, not something that’s suddenly taking over.

She said she’s happy to spread the word about WOU’s support of work in Spanish linguistics.

“I feel like I am an ambassador for Western Oregon University every time that I travel,” she said. “I want to show other people we are doing a great thing. No other university in Oregon is doing as much for Latino students as we do. After graduation, our students have no trouble finding jobs. They are proud about their time here.”