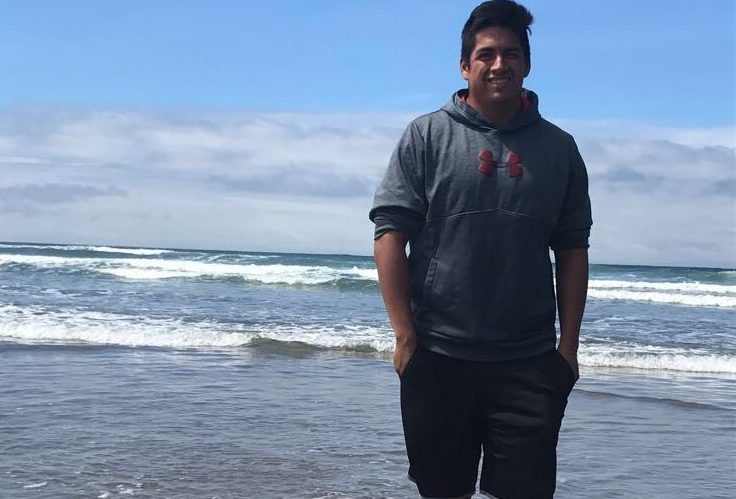 WOU intramural fans and players may know referee and supervisor, Frank Calzada, well. Now gearing up for a graduate assistantship in sports management with Indiana State University, Calzada came in to chat about his experiences at WOU before graduation.

Thanks once again for meeting with me! What’s your home town?
I’m from Santa Rosa, California. I moved here around 3rd grade.

How are you liking it around here?
I liked it! Liked how there was actually weather, climate. It rained, it snowed, it was sunny, it was cold, it was everything. California was just—

Wet season, dry season
Yeah, all of that.

I can image. I actually grew up in Florida myself.
Oh really? Almost went there this spring- no, this winter for the NERSA Flag football tournament that I was a part of with intermurals. But then I got sick. Couldn’t fly, couldn’t go.

So was WOU your first school or were you a transfer student?
WOU was my first school. I came here as a freshman. I had three choices: UO, OSU, and Western were the only ones I wanted to go to. I got accepted to all three but I chose Western.

Why did you choose WOU?
I chose it specifically because it’s a small college. Not so many students were here. I come from a small town, from Merlin, Oregon, and I like that feel of a small town. The class sizes too. There’s sixty-plus people (in classes) at OSU and UO. No thank you.

Yeah, it can be easy to get lost in that.
And then, athletics. I’m not a D1 athlete but I think I can qualify for a D2. And I did. I did track here for three years and that was pretty fun. I did a lot here *laughs*. I made sure I tried to do a lot. The only thing I couldn’t do were a lot of club sports or a lot of club things just because I either did athletics or I had a year where I was injured. I tore my meniscus in my third year so it ended my career for track.

So what about intramural?
I’ve been playing on the intramural team since last year. This whole year. We just got done with softball, where my team won.

I’ve heard good things about the intramural team.
Yeah, it’s really fun. We started doing the extramurals. They call it NIRSA. It’s against other schools. We won the NIRSA region championship and that qualified us for nationals in Florida. We were one of the smaller schools there besides the smaller D1 schools in the East Coast area. That was our first year doing it.

So along with intramural, were there other extra-curriculars that you were a part of?
Besides athletics and being on the track team, that’s about it besides intramural. I used intramurals as my recovery and was playing around. It got me more into it. It was definitely a sad point in my life because I realized that I was no longer going to be an athlete. Intramurals made me feel better. I got to do something that’s almost like athletics and there’s people who are as competitive as me. It’s actually how I met most of my friends today, through intramurals. It’s what kept me here my freshman year.

What was your position with intramural exactly?
I was a ref for practically every sport we have, from basketball, football, softball, volleyball, and soccer. I’ve been a supervisor for two years, three years as a ref. I’ve gone to NIRSA conferences in Portland. There were a lot of cool schools and people there who were a part of intramurals and it was fascinating.

It sounds like you’re very passionate about the community here, both with intramural and with WOU in general. What’s something that you love the most about WOU and your time here?
Basically, the friends and people I’ve met here. In my five years, I’ve gotten to meet a lot of people. It’s nice to meet so many people, even if they weren’t friends, but at least we got to associate with each other.

How would you describe your biggest achievement in college?
My graduate assistantship. Just because I never even thought of the opportunity of going to get a master’s. I never believed I could because all you hear is you have to have a certain GPA. But I kind of found a back-alley way, as they call it, and found a job first. It’s the biggest thing you hear in college, that your GPA needs to be really high to make it into a Master’s program. I just like the idea that I was able to get it through my experiences.

What will you be doing at Indiana State through your graduate assistantship?
I don’t know the exact position title but it will be with intramural and I will be a club sports supervisor. I’ll also be a life guard. Indiana State University has a big aquatic center, so that will be thrown into my title. *laughs*

How did you stumble upon this graduate assistantship?
Through Andy Main (the assistant director of intramural and club sports). He said, ‘It really seems like you enjoy this. Would you be interested in getting your Masters?” So I asked him in what? It was in Sports Management and Sports Marketing, but I didn’t want to pay to go back and get my master’s. He explained that I could get my master’s like he did: through a grad assistantship. So that’s where I found Indiana State.

So, I want to know: what’s one thing you wish you knew when you first started at college?
Probably how important your freshman and sophomore years are here. It took me until my junior year to realize that I was completely on my own. This is not high school. You’re by yourself for the first time. And when you’re a sophomore, most freshmen leave the dorms and go live on their own in a house. And then there comes a more adult life, like worrying about paying the power bills. You have more freedom than when you live on campus but you also don’t have an RA knocking on your door, asking how your homework’s going. You are motivating yourself.

What would you say is the most important lesson that you’ve learned about yourself here?
I’ve learned that I’m capable of doing more than I actually thought. Kind of just thought I was a regular student, didn’t think I could ever do a master’s program. It was never even in my wildest dreams.