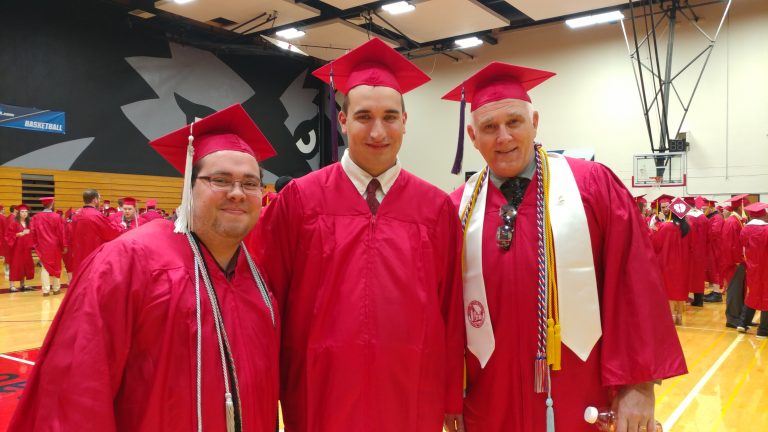 Graduating senior Roger Deleon, from Beaverton, book-ended his college experience at WOU. He started out at WOU in 2010 for two years, then transitioned to community college where he earned two associate’s from Portland Community College, before returning to WOU in fall 2016.

Why did you choose WOU?
It was cheaper than other schools I was looking at, and had a strong 1:1 interaction and support system with both your professors and and the Disability Services office. It’s also close to home for me and as an resident student, it was the most cost-benefit college for me.

What do you love most about WOU?
I love how caring the staff and faculty here at WOU. If we’re having trouble, they’re willing to help you, like find someone who can fully support you. They do care about your success while at WOU. 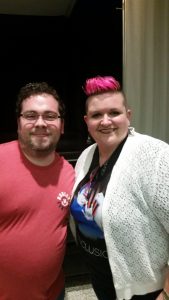 What do you love most about the major/minors/degree you completed?
With my Communication major, I loved the variety of classes that I took for each requirement. All the classes are offered anywhere from 8 a.m. to as late as 5 p.m. (depending on the term, class and professor), so if you work or have other personal obligations, you can either get all of your classes done early enough in the day to focus on other things or take classes later in the day to take care of work, dropping of kids at school, important appointments, amongst other things.

With my Public Policy minor, I loved how interactive and informational the classes were. It helped support some of the business, professional, and organizational communication Classes I took for my major by teaching me about topics like administrative law, public policy and public administration. The support and correlation between both programs helped compliment each other, and after a few terms, it was nice, easy and cool to see so much of the same information in both.

Outside of classes, what have you been involved in on campus?
Through 2010-2012 when I first started at WOU, I was a Stonewall Center Volunteer, which was overseen by ASWOU at the time, Safe Zone and the Student Activities Board.

Upon returning to WOU in fall 2016, I worked for Campus Dining (cashier at the Wolf Express when it was open and a Sandwhich Maker at Valsetz) and the Registrar’s Office as a student registration assistant for SOAR days in 2017 and as a workstudy office worker for the Registrar’s office shortly after the last SOAR day occurred. In the 2017-2018 school year, I was involved with ASWOU Senate for fall term and ASWOU Elections Committee and ASWOU Judicial Board both in spring term.

In the 2016-2017 and 2017-2018 school years, being involved as much as I did showed me how the student body ideology has changed since I left, and in some respects, for the better. The jobs I held helped me connect better with the student population after being gone for a short time, and being involved with ASWOU further enhanced that connection with the school.

What has been your biggest achievement, success or accomplishment in college? 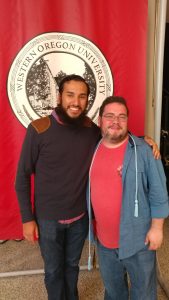 There’s three accomplishments I am glad I did in college:

Has there been a class or professor that has been particularly inspiring to you? Please tell us about it!
COMM 312: Influence Through Argumentation taught by Dr. Molly Mayhead was super impactful for me. It was my first 300-level Communication class I took upon my return to WOU in fall 2016, so with the material/set up of the class and assignment, and talking to Dr. Mayhead for clarification and help, this was the start of my success at WOU.

What will you miss most about college?
I will miss the constant in-person contact with my professors, friends and other people that have supported me over the years. Email and texting helps stay in contact with everyone, but having that in-person interaction from everyone will be easy to miss.

What are your plans for after graduation?
I have a summer camp job in the Government Camp (Mt. Hood) area through the Boy Scouts of America as a supervisor of the camps store (the position is called trading post director) that starts on June 17, the day after graduation, for two months. After that, my goal is to try to get a job in higher education to eventually become an academic adviser here at WOU.

What advice do you have for current and future Wolves?
USE AS MANY RESOURCES AS YOU CAN AT WOU!!!! That means you should utilize the Student Health and Counseling Center, Student Success Center, the Writing Center and your major adviser for help.

What is your favorite spot on campus and why?
The Grove right outside of Ackerman Hall is my favorite spot because of the large grassy field to lay in (for both sun and shade) for relaxation and to hang out with friends during fall and spring terms

Did you have any funny mishaps or moments of confusion when you first started at WOU?
One of my very first classes during my first fall term in 2010 here at Western, COMM 112: Interpersonal Communication with Dr. Cat McGrew (who is currently the Director of Academic Affairs and Operations here at WOU), it met on Tuesdays and Thursdays and had two different meeting rooms each day. On Tuesdays, it met in one of the classrooms in the Honors Hall in ASPC, and on Thursdays, it met in a class room in the old Education building. Well, one day during the middle of the term, I accidentally when to the classroom in the Honors Hall instead of going to the Education building and as soon as I realized it, I booked it to the Education building, ultimately being  late to the class. I originally hated myself for making the confusion, but I chuckled later on because of it.

What’s the most important lesson you learned about yourself while in college?
I loved learning that professors are much more approachable than I initially realized, and it’s something that helped me a lot lately in order to succeed. Going to your professors were always terrifying, but as you get older and do it more frequently, you learn to love talking to your professors and go to them for help. If it wasn’t for the professors I had being to open and welcoming to get help during their office hours, I am not sure where I would be today, academically.