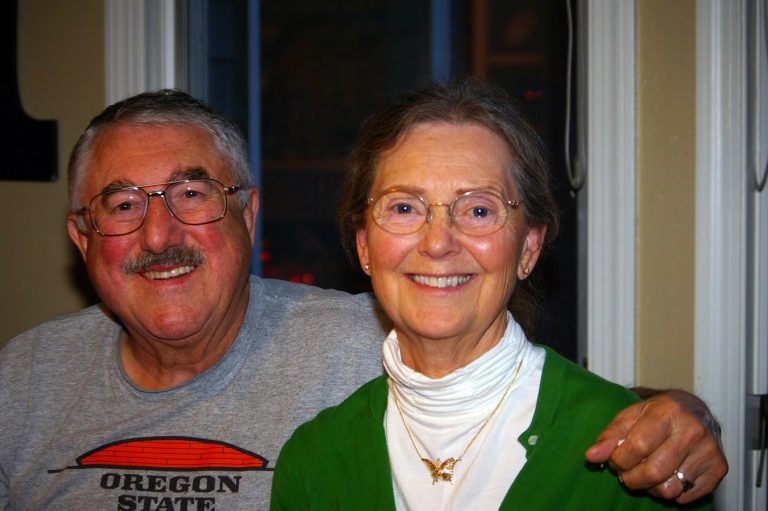 The Alumni Award of Excellence is awarded each year to an alum (living or deceased) for his or her contributions and services to the university and community as well as for his or her distinguished professional work.

Lynn Hamersly’s dedication to Western Oregon University—known as Oregon College of Education when she attended—was a positive in influence on university students for more than 50 years. Many of them experienced the welcoming harbor offered by the library that displays her name, but her support for the university and devotion to student success went back much farther.

Lynn (Rathbun) Hamersly, a native of Wasco, graduated from OCE in 1964 with an education degree. She lived in Todd Hall, a women’s dormitory on campus, for three years and served as “floor mother” part of that time. One late summer, while working in the kitchen, she met her future husband, Wayne, who was on the football team.

“She gave me a double scoop of mashed potatoes,” Wayne Hamersly ’62 recalled. “She had a nice smile, and I thought, ‘That’s
kind of a good deal.’ I asked her out immediately.” They were married in June 1963.

Throughout her life, Lynn was an enthusiastic learner and lover of books. After graduation, she found a way to support education through improving libraries, empowering women students and helping serve children on the autism spectrum, among many other endeavors. Lynn taught for eight years in Mt. Hood Community College’s Steps for Success program, which helped women with children earn their GEDs. She went on to establish scholarship funds for women at Mt. Hood and Clackamas Community College, where she was also on the foundation board of directors.

Lynn and Wayne had three children: Scott, Michael and Carole. e couple retained their ties to OCE even as their family grew, with Wayne serving on the foundation board of directors during the 1970s.

Decades later, when Western Oregon University approached the Hamerslys about supporting a project on campus, they didn’t hesitate. e campus library was struggling, Wayne recalled, and because of Lynn’s devotion to books and reading, a new library building was a logical choice. It opened in 2000.

“She spent many hours in a volunteer capacity answering phone calls in the NWAF office from parents seeking help for their children and family,” Pardew said. “Her most abiding quality was the selflessness and humility that she exhibited. She was the one in the background doing the work and never seeking personal recognition.”

In just the past year, Lynn and Wayne continued their support of WOU by contributing funds for 20 $1,000 scholarships for the football program as part of the 100 Opportunities campaign. Lynn’s generous spirit, joined with her love of education, made her the ideal candidate for recognition, her nominators stated.

“Lynn lived the spirit of stewardship in her daily life,” Pardew said. “Alumni are honored for the Alumni Award of Excellence for specific reasons. Lynn Hamersly receives the award for every reason.”

Lynn passed away on May 21, 2018. Prior to her passing, she was thrilled to learn she had been chosen for this award.