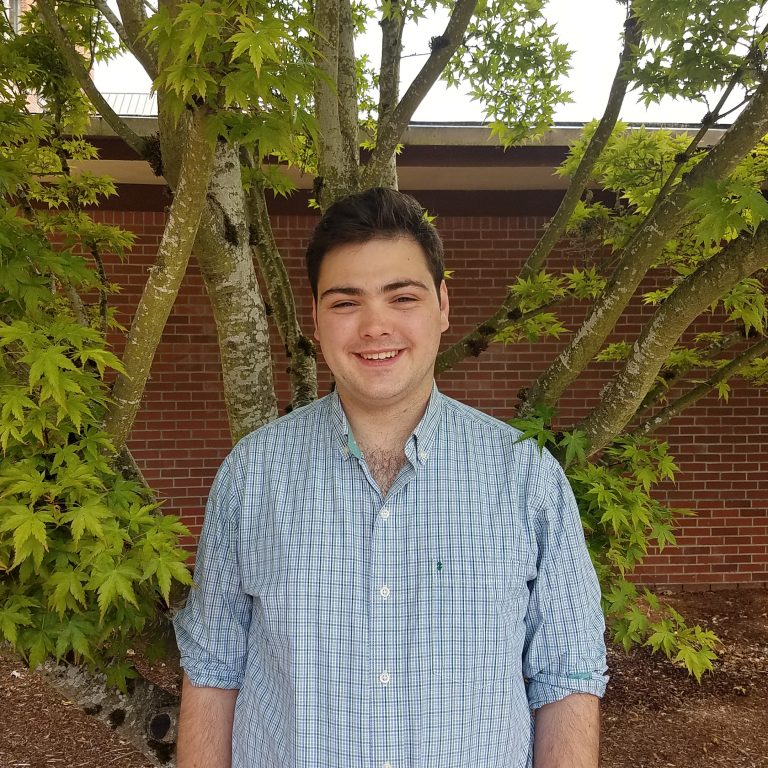 The Delmer Dewey Award, presented each year to the outstanding male student, is named for former Dean of Men Delmer Dewey, who died in 1953. The award was first presented in 1954.

Like many Western Oregon University graduates, Delmer Dewey Award winner Carter Craig ’18 touts the university’s welcoming nature. For the outstanding male graduate of the year, that welcome manifested itself during his freshman year, when he first got involved in the Residence Hall Association (RHA). He ended up working in WOU residence halls all four years, and it made all the difference to his experience.

“My involvement with RHA has been a pretty big part of what I do here,” Craig said. “I’ve served for two years in the president role, which is nice because you get to do the programming as well as some big-picture things like determining what our goals are as a team, what values we have and how we put those values into the things we do like the programs. So we’re not just throwing pizza parties.”

The history major earned a minor in political science and now plans to earn a master’s in public administration in Oregon or Illinois. Originally from Albany, Craig is comfortable moving to a large metropolitan area. His goal is to work for a government agency, ideally one that helps people with vital services.

“I want to work in a branch of the government,” he said. “I’d like to help provide services and improve the quality of the services provided. I think the Federal Emergency Management Agency would be kind of exciting. It would be a high-pressure job, but I’d like the adrenaline rush you could get by walking into a disaster situation and being the calm head to help direct things.”

Craig said part of his RHA work, such as planning and presenting events, has helped him learn to understand and work with groups of people. One might say the same for his Honors thesis; his focus has been on how the Puritans of 17th-century England used morality to create political policies.

“They believed in predestination, so they cared more about acting for the good of everyone rather than focusing on the individual,” he explained. Despite the far-flung time period of his research, the resources he needed were plentiful, he said, thanks to British history scholars who have studied the period extensively.

Gavin Keulks, the professor and Honor Program director who nominated Craig for the Delmer Dewey Award, touts his well-rounded approach to university life. “Carter has excelled academically and also in leadership capacities throughout his time at WOU. His thesis topic says a lot about his uncommon interests and academic dedication. And (while working) with him
on a number of residence hall programs, I could see first-hand the positive impact he made on those students.”

When looking at universities to attend a er high school, Craig said he couldn’t help but notice that, during tours on campus, the guides would stop frequently to greet friends and wave at passers-by they knew.