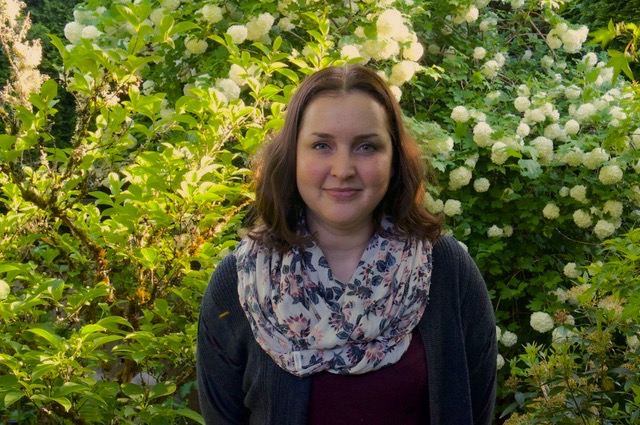 From the OHSU School of Nursing, Monmouth Campus, the Golden Lamp Award is based on the American Nurses Association Code for Professional Nurses and the Florence Nightingale Pledge. It is given in recognition of exemplary demonstration of scholarship, leadership, professional commitment, innovative contributions and humanitarian ideals.

OHSU School of Nursing’s Golden Lamp Award winner Janine Egan ’18 may be a transplant from California, but she caught the Oregon bug eight years ago and plans to remain here after graduation. The degree will be her third, and it’s the starting point of what she calls “a second career of sorts.”

Egan, a native of Manteca, earned a bachelor’s degree in biology at CSU – Stanislaus before moving to Corvallis to get her teaching master’s from Oregon State University. Not too far into that program, she knew a high school biology classroom was not where she wanted to spend her career. Still, she finished the program and taught as a substitute for a while. She finally found her passion while working at an assisted living facility.

“I absolutely fell in love with the residents,” she recalled. “I wanted to do more than just the caretaker role. My love for education and my love for science and my love for caregiving—nursing just was the perfect fit for me.”

Egan, 35, applied to Oregon Health & Science University’s nursing school and was happy to be placed at the Monmouth campus, which is close to her Corvallis home. She’d been prepared to commute to Portland every day if necessary.

For the last year of her program, she’s been doing clinicals—the hands-on experience nursing programs require of their students—in Springfield. After graduation, she’d like to work in a non-acute setting, ideally in a position that includes an education and prevention focus.

“I have a special passion for working with older adults,” she said. Part of her coursework has included a gerontology program that she had to apply to be in.

Egan touts the OHSU Monmouth campus faculty for helping her succeed. “I could not have asked for more support during this journey,” she said. “In fact, after I graduate, I’ll be sad to lose that support.”

She also recalls hours spent in the Hamersly Library during her sophomore year, where the sta helped her navigate the sea of study rooms, electronics and other resources available to students.

She and her boyfriend, who moved with her from California, plan to stay in Corvallis, where Egan’s mother and a brother
live as well. They like the safe neighborhoods and welcoming feeling they get in Oregon compared with the region east of the Bay Area that they came from.

Egan is happy to share some advice for other students—both recent high school graduates and non-traditional students like herself—about succeeding in college.

“Remember the big picture of what drove you to get into nursing,” she said. “When you get overwhelmed with courses or grades, keep your goals in mind. My goal was to become someone who helps people get the care they need. That’s what drove me.”