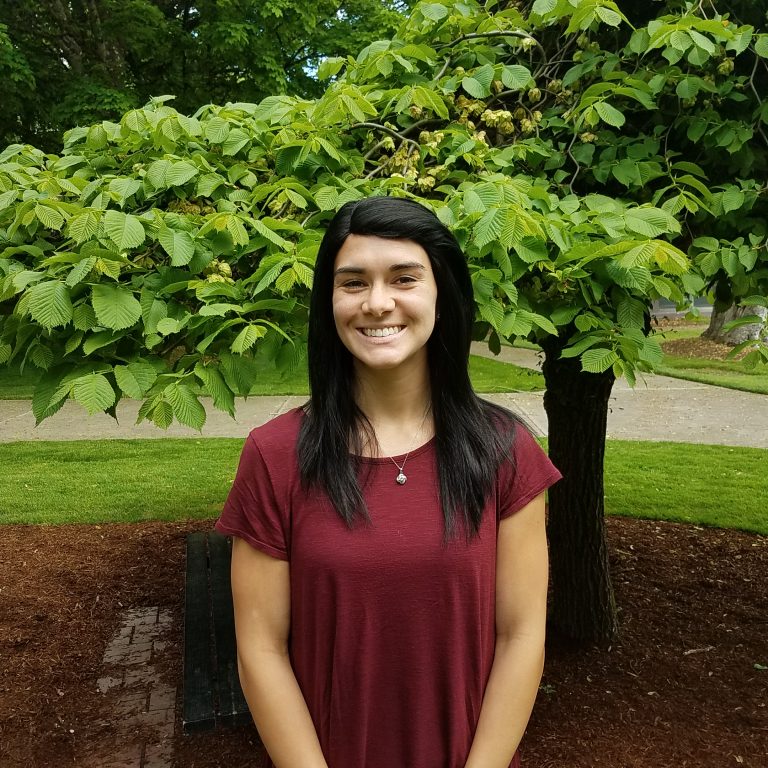 The Julia McCulloch Smith Award is presented to the outstanding female student of the year in the memory of Smith, alumna of the class of 1895, who died in 1930. e award was first presented in 1931.

When this year’s Julia McCulloch Smith Award winner for outstanding female graduate, Sara Madden ’18, says she “didn’t do much” during her first two years on campus, she’s selling herself short. In addition to her studies, she participated in every sports season while at Western Oregon University; fall meant cross-country, winter was for indoor track and spring brought outdoor track and field. In the summertime, she trained and coached kids sports.

Madden, a social science major who hails from Kent, Wash., estimates she has spent nearly half her life on the track. She specializes in the 400 hurdles but also is on the 4X100 relay team.

If being a student in the Honors Program and a full-time athlete weren’t enough to keep Madden occupied, she also stepped up her student activities game in her final two years at WOU.

“My last couple years, I tried to get more involved in the community and clubs on campus,” she said. A history enthusiast, Madden joined Phi Alpha eta, a national history honors society, and served as president as a senior. She also has volunteered at Deepwood Estate in Salem for more than two years. In her final term, she interned at the Historic Gentle House and worked on a project that involved cataloguing some of Thomas Gentle’s papers.

“Every single document is different,” Madden said in describing what she likes about the archiving process. “We found one newspaper from WWI. It was so crazy to be able to see this in front of you and not in a museum. You’re holding it with your hands. It’s pretty cool.”

She also worked on her Honors thesis, a two-year endeavor that’s required for students in the academic program. Madden’s focus was on the Jewish resistance during the Holocaust. She chose the topic because a er visiting Dachau concentration camp when she was 11, she became fascinated by that part of history.

“I’ve just kind of been drawn into the topic,” she explained. “For me, I like to focus on the resistance instead of how many people died. Of course, that’s part of it, but the people who resisted wanted to regain their humanity that the Nazis had taken away from them. With my research, I feel I’m doing that.”

Her work ethic and thirst for knowledge get high praise from history Professor David Doellinger, one of her nominators for the outstanding student award. “My colleagues in the History Department who have also had her in class emphasize her sustained intellectual curiosity and her ability to link various assignments to build a coherent body of work in history and social science,” he wrote.

After she graduates, Madden hopes to find a paid internship or job in Seattle area that involves responsibilities such as archiving, museum work or creating photography databases. She said she feels perfectly prepared for the working world thanks to the skills and support she gained on the WOU campus.

“For me, Western is very welcoming,” she said. “It’s very friendly. ere are two things: It’s friendly and welcoming but also like family. People really want to develop friendships and relationships with you, not just saying ‘Oh, hi’ as they pass you on the sidewalk. Plus, all the opportunities we have here: clubs, intramurals. Everywhere you look, there’s something.”