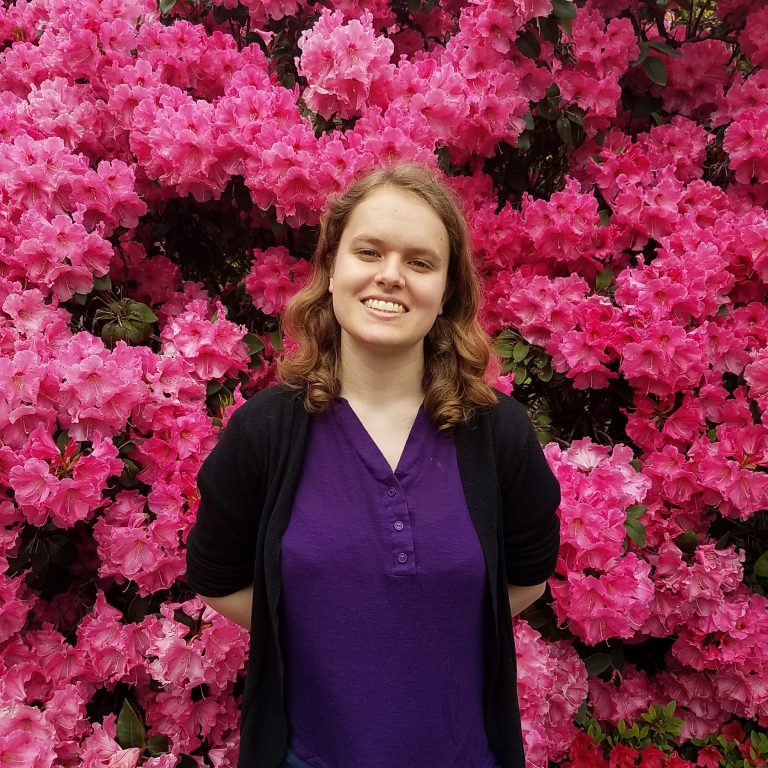 The Outstanding Graduate Student Award honors a student who has demonstrated superior achievements in scholarship and academics, character, leadership and initiative during graduate studies.

Last year at this time, Alissa McAlpine was in this same place: at Western Oregon University’s Commencement on a June afternoon. Then, she was gathering her undergraduate degree, a Bachelor of Arts in American Sign Language/English Interpreting.

This year, however, she’s earned the role of Outstanding Graduate Student and is taking home her master’s in Interpreting Studies. the new MAIS program she’s in yields graduates in five terms, often, as McAlpine did, starting immediately
after undergrad graduation. She only found out it was an option a few weeks before Commencement 2017.

“It was a whirlwind, but I needed the momentum to keep going,” she said. “I knew that staying in the rhythm of school and going straight through would be better. The (MAIS master’s) program is focused on improving your practice and getting ready for certification.”

The Woodinville, Wash., native had her eye on the prize—a job as an interpreter—from a young age. She knew WOU’s reputation as a leader in the field, making it an obvious choice for where to attend college.

McAlpine has been part of the Honors Program during her years at WOU. As a graduate student, she’s focused on action research around the relationship between self-concept ethics and ethics and anxiety. “Basically, it’s about “the imposter phenomenon” and how that manifests for interpreters,” she explained.

She said that upon reflecting back on her time in Monmouth, she’s a little surprised how much she learned—especially so skills—when she didn’t know she was learning it.

“I’ve been thinking about it a lot,” she said. “There’s just a lot of things I didn’t realize I was learning when I was an undergrad. I took credits in some classes just to meet the academic requirement, but now when I’m out working as an interpreter, I realize how helpful having taken those classes was. I think, ‘I’m so glad I took that class!”

She also learned some big lessons about how she wants to interact with others. “Erin Trine has a sign outside her office that says ‘We are all smart here. Distinguish yourself by being kind,” she said. “That theme came up over and over again throughout everything, and I found that my own capacity for empathy and for understanding and connecting with people just grew tremendously through being involved in the program.”

McAlpine isn’t just looking back, though. She’s got plans for the future that include additional education in interpreting and adventure in Central America. She’s got a scuba trip planned for July and has created a bucket list of sorts for other places she want to explore underwater.

“My goal is to cross o every country in Central America before I’m 30,” she said. She started diving when she was 16, a er getting certified during a Girl Scouts trip to Panama. She’s not one to shy away from a challenge, whether it’s a scuba outing or a simply taking opportunities as they come.

“My original plan for after graduation was to stay here and interpret full time for Western,” she recalls with a smile. “I was content to live in Monmouth the next 20 years. Then life went another way. That’s been the story all along. I had a plan, and none of those things happened. But everything worked out.”