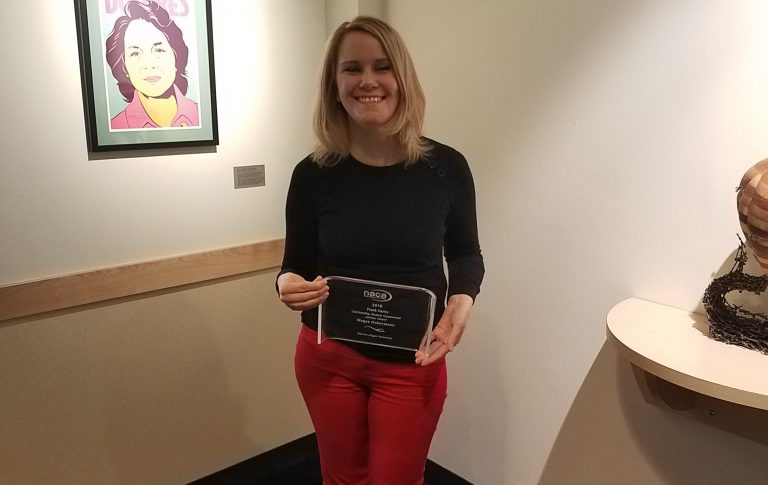 Associate Director of Student Engagement Megan Habermann was honored to win the 2018 Frank Harris Outstanding Student Government Advisor Award earlier this year from the National Association Campus Activities, and the kind words shared by her nominators went straight to her heart, she said.

Former ASWOU Presidents Cynthia Olivares and Jessica Freeman wrote warm recommendations to the NACA on Habermann’s behalf, as did Student Engagement Coordinator Kelsey Elam-Geuting. A common thread among the three letters was the helpful and supportive guidance Habbermann offered through the difficult events surrounding the fall 2016 death of then-ASWOU President Alma Pacheco.

Olivares, who succeeded Pacheco as student body leader, wrote this about Habermann: “She was very helpful to me in my transition from vice president to president. It was a difficult transition for me being the vice president because I had a very close connection to the former president and I was not prepared to be in this position. Megan helped me along the way with the turnover we had in our student government and helped me get our organization back on track.”

Elam-Geuting echoed that sentiment, adding that Habermann’s approach allows each group of students to inspire the group that comes after them. “Megan does this work because she loves helping students believe in themselves and then turn around to empower the student next to them.”

“(The Outstanding Student Government Advisor Award) meant a lot to me because student government advising is hard,” Habermann said. “I try to guide them in the right direction, but they make the decisions. That’s the difference between advising and supervising. I’m here to help students learn critical thinking skills.”

Working with ASWOU is just the start of Habermann’s job duties. She also oversees the Peer Leaders Understanding Students (PLUS) Team and the Discover Leadership program for freshmen and transfer students who are considering positions as resident assistants or student ambassadors. She volunteers to advise the Triangle Alliance as well.

Clearly, Habermann works hard to foster student success. But that’s nothing, she said, compared with how hard WOU students work to foster a campus community.

“I like helping students see that they have control and power over their own destiny and any idea that they have can be successful in some way, shape or form and help them get there,” she explained. “Our students are creative and hard working, and they want to help the (campus) community. They are so communal. They want things to be student created.”

She wasn’t always surround by students with that attitude. Before coming to WOU in 2009, she held a similar position at an elite East Coast college with a tuition about seven times WOU’s. There, students had big ideas and needed to be brought back to reality, she said. At WOU, she’s helping students see the possibilities.

“I loved my (East Coast) students, but I think that some of them had never heard ‘no’ before,” she said with a laugh. “Some of them embraced it and created amazing solutions, but others were more challenging. Then I came here, and some students seemed as though they’d never heard ‘yes’ before. They would create all these barriers that didn’t exist. Here I’m tearing down barriers. There I had to set parameters.”

Habermann, who is originally for Oregon City, earned her master’s degree in College Student Personnel at University of Rhode Island. Her bachelor’s in Communication Studies came from University of Wisconsin – Green Bay, where she was the only student from Oregon.

“I was called The Girl from Oregon. There were two guys from Washington and another woman from California,” she recalled. “The students kept trying to introduce all the West Coast students to each other. They’d say, ‘Have you met The Girl from California?’ and I’d say ‘Yes, yes I have. She’s great.’ ”

She met her husband, Marshall Guthrie, during grad school. When she got the job at WOU, they moved and a few months later, Marshall also started working at WOU. He’s the director of the Student Enrichment Program.

“He’s from Fort Dodge, Iowa,” she said of Marshall. “We were looking to be within six hours of one of our parents. And we both wanted to work at public universities that serve under-served students, having both worked at private colleges.”

She has certainly succeeded on that score. In the past few years, she’s supported WOU student in learning important life skills through programs such as Discover Leadership and the Leadership Certificate program. About half of the students who apply for Discover Leadership self-select, but the other half are nominated by their peers. When students learn they were nominated, it’s a big shot of confidence.

“They will call the person who nominated them and ask them why,” Habermann said. “It’s a great moment for a peer-to-peer connection.”

This year, she said, 28 of the 31 students who started Discover Leadership completed the 10-week program, which runs from October to January. Some already have been hired for the PLUS team, and others will be RAs, ambassadors or maybe peer mentors.

That’s why it’s a gut punch to her when she hears other students say “No one is involved at WOU.”

Those opportunities to gain leadership skills will serve students well in the future, Habermann explained, because they will be in demand in virtually any career field.

“No matter where you work after graduation, you’ll eventually probably manage people,” she said. “So having opportunities to manage or mentor peers on campus now, while it’s safe, that’s very practical. And fun.”

And she doesn’t need an award to keep supporting student to do just that.

But it is nice.