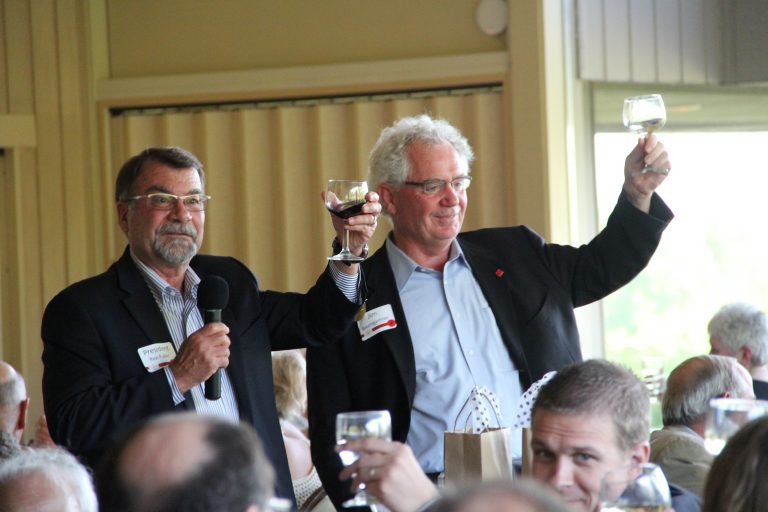 Jim Baumgartner ‘81, an attorney and Western Oregon University alum, just finished up a four-year stint as chairman of the Board of Trustees. His time on the board is not over, though, as he was also appointed to another four-year term as an at-large trustee.

Baumgartner is proud of what the board has accomplished in the initial years of its existence. Formed when WOU – and the other state public universities – became independent in 2015, the panel was focused on transitions from the very start. He is pleased that many of the original members will continue serving another term, bringing the stability of continuity.

“In 2015, we became independent and had a new president,” Baumgartner recalled. “It was a brave new world. Having trustees who have wrestled those issues and have seen what has happened will be very beneficial moving forward. It’s a complex challenge to be independent.”

To Baumgartner, the evolution for WOU to different type of institution looks familiar. He earned his bachelor’s degree the year Oregon College of Education changed to Western Oregon State College and started focusing on programs beyond education. Then-President Gerald Leinwand asked for his help as student body president in getting student support for redefining the university’s mission.

“I remember at the time that students were resistant to that,” Baumgartner said. “Part of me was resistant to it. But it’s really indicative of one of the lessons I learned at Western. Instead of fighting authority on something, you can be a partner. What he said made sense to me. I saw in the end that it did make sense, and it was something I could help make happen.”

Fast forward 30-plus years, and Baumgartner is again considering how WOU can evolve to meet modern-day challenges, such as a nationwide trend toward flat numbers of high school graduates.

“(We have to) adapt Western’s presence – its mission, its offerings – and develop its resources so we can compete effectively for a changing populous,” he explained. “The board can help focus on what to change in order to be effective in that arena. (Thing such as) financial resources, course offerings, recruitment strategies, where do we find students, and ask whether that meets our mission?”

Finding constructive ways to adapt to change is something Baumgartner has always embraced. Even as a college student, the Crescent Valley High School graduate found his life plans unexpectedly altered. After intending to earn a degree in special education, it became clear that classroom teaching was not for him. He ended up graduating with an interdisciplinary degree with a focus on language arts, speech and performing arts.

“I was on the speech team, in several theatre productions and in the dance company,” he said. “But I was also active in student senate. I was the student body president my last year and won the 1981 Delmer Dewey Award (for outstanding male student).”

He then set his sights on a Master of Fine Arts program at the University of Utah, but he couldn’t afford to attend without working a few years to save money. That quest took him to all kinds of unexpected places: a bookstore, a construction job, and even a “man camp,” a makeshift camp in Wyoming for more than 1,000 workers — pipefitters, roughnecks, well-drillers, welders — who were transported each day to an oil refinery project nearby.

That particular job taught him to be resourceful and flexible when crises arose. He admits, however, that the camp was a pretty rough place. “It was quite an adventure,” he said with a chuckle. “There was lots of trouble. Thank god I was not on the security force.”

During the lull after college, he also took the LSAT and applied to some law schools. He ended up being offered a scholarship to Willamette University in Salem. His girlfriend (now wife) was teaching in Albany at the time, so Willamette seemed like a good fit. After graduation, he went to work for a Portland law firm and stayed there for 32 years.

“I started in litigation. I didn’t necessarily love it,” he said. “I like to argue, and I’m good at advocacy. But I found I really didn’t like the litigation and the fighting. What I really liked was working with the clients and helping them avoid future conflicts, helping them resolve issues, helping their business be successful, so I transferred from a litigation practice into a business practice focusing primarily on family-owned businesses.”

These days, he’s working for one of his clients and looking forward to retirement, likely in the Corvallis area. But he’s ready for another four years on the Board of Trustees, which he describes as a particularly grounded group that reflects the university’s mission to provide transformative education.

“They are self-made people,” he said. “Gov. Kulongoski just came off the board, but there’s a guy who came out of an orphanage and through military service to serve in three of the highest elected offices in the state. That’s pretty impressive stuff.”

Trustee Betty Komp took over as chair of the board on July 1. Baumgartner anticipates she will use her strong ties to multiple facets of the community to support WOU’s opportunities. Meanwhile, he said he’ll look back on his time as chair with pride.

“For me, I did this because of the experience I had a Western,” he said. “I hope that by giving something back to the university, I support faculty who served me so well and the students who are now being served by faculty, they are getting opportunities that they otherwise might not have had.”