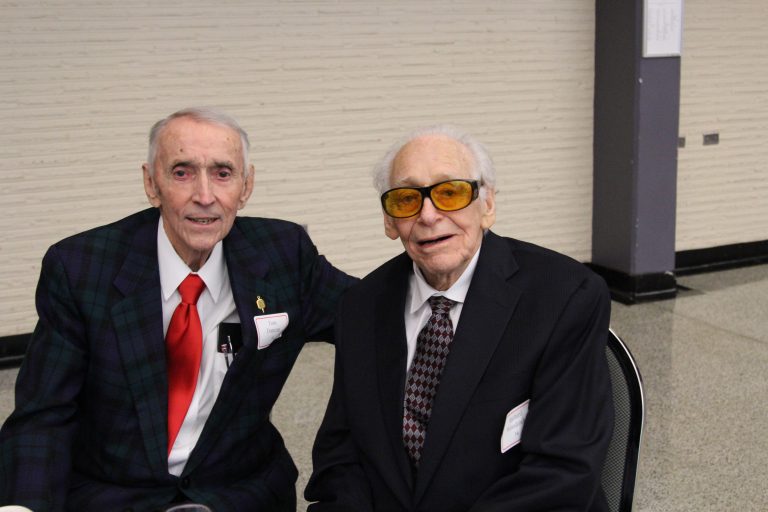 Western Oregon University celebrated scores of donors Sept. 21 at its annual President’s Club Dinner on the university campus. More than 125 people attended the event, which highlights donors who generously supported WOU with significant financial gifts in 2017-2018.

Dr. Richard Woodcock, who made the largest single gift of $1 million, attended the dinner, which was a rare honor for the university because he is in his ’90s and lives in San Diego. His donation will help underserved, diverse students who are studying science, technology, engineering and mathematics fields (STEM) or who want to become educators in those fields.

Heritage Society members were recognized during the evening in a change from past practice. Members of that group have pledged donations in the form of a will, trust or life income planned gift.

“We wanted to ensure we were making our appreciation of living donors abundantly clear,” said Erin McDonough, executive director of Advancement and WOU Foundation. “These donors create a lasting legacy for WOU and its students, and we don’t want to wait to celebrate that support.”

In addition to the University Benefactors (cumulative gifts of $100,000 or more), McDonough also highlighted the outstanding year had by the Annual Fund, which received 1,300 gifts this year, including $45,000 on Giving Day.

Finally, McDonough thanked the 24 President’s Club members who have given gifts for 10-14 consecutive years and the 13 members who have supported the university financially for 15-22 straight years. The biggest round of applause was for the two donors, Evelyn Smith Lorence and Margaret Hall, who have given gifts for 28 and 30 years, respectively. WOU Foundation Board Chair Cori Frauendiener and ASWOU President Evelyn Guzman also were on hand to thank donors.

WOU President Rex Fuller thanked the gathered crowd and reiterated the importance of donors who can be counted on to support the university and its mission. “We would not be as successful in prioritizing student achievement and high academic standards without the generosity of our donors,” Fuller said. “The supporters here tonight are the foundation of what we do at WOU.”