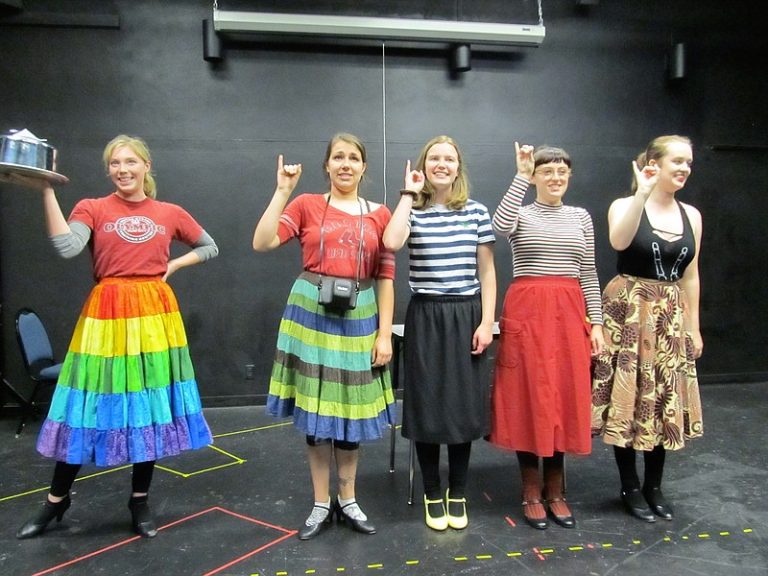 MONMOUTH — The Susan B. Anthony Society for the Sisters of Gertrude Stein is meeting for their annual quiche breakfast at Western Oregon University — for the next couple of weeks.

Set in 1956, “5 Lesbians Eating a Quiche” captures a moment in time between five women, who refer to themselves as “widows,” coming to terms with certain realities after atomic bomb sirens sound during their gathering.

“It’s really an endearing comedy,” said director Kent Neely. “I can remember women like this in the late ’50s, early ’60s, who were just very sweet and dear and genuine.”

They were high energy, and they seemed to be in control of everything, he said.

The women in the play “seem to be in control until the bomb goes off,” Neely said. “They all say they’re widows, of course, in the play they discovered that their real identity isn’t as a widow, it’s as a lesbian. It’s just a sweet story of women who find their real identity and come to terms with it and are happy about it. And that’s good.”

Neely learned about the play from a friend who saw it at a theater festival in Charleston.

“I immediately got myself a copy of it and read it and laughed while I was reading it,” he said.

Neely isn’t expecting audiences to come away with any huge insights, he said.

He said his hope is “that they just laugh until they cry.”

Audiences are considered to be part of the meeting.

“No one is going to be put in a difficult situation,” Neely said. “It’s just in good fun.”

Except for the beginning, all five women are on stage for the hour and 10 minutes of the play.

“Casting is difficult, but it’s so key because you go into it with a vague notion of what these characters are like, and then you see what the actors bring to it that either fulfills that or expands it,” Neely said. “I had a lot of talented women, but it was looking at these five women and (how they) interacted.”

In each of the actors, this performance brought out something he hadn’t seen in them before.

He saw a certain energy in this group.

“When they were portraying these women in auditions, and that’s so early, but I can still see a spark,” Neely said. “You think of people like June Cleaver and Lucy Arnaz and they have to be believable. They’re not clowns. They have to have dimension. They’re real characters.”