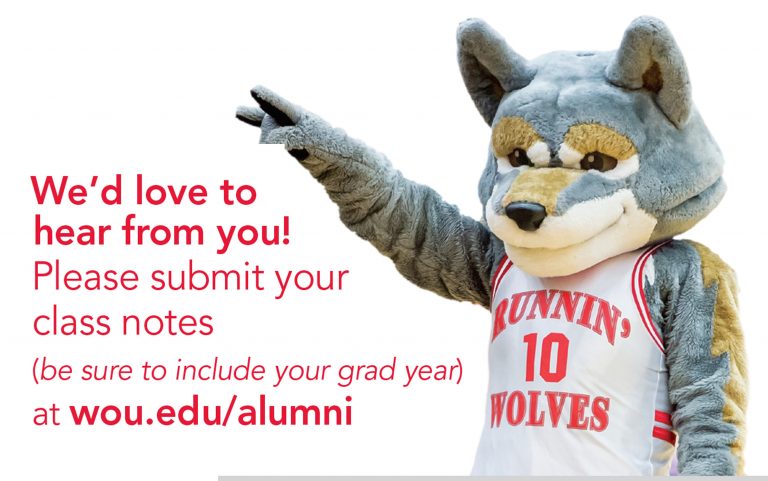 Janice Kenison Cole ’59 is retired and living in McMinnville. She taught school for 30 years in Salem, Baker City, Dayton and McMinnville before retiring 17 years ago.

The work of late artist Rick Bartow ’69 was featured during August and September at the Newport Visual Arts Center. The exhibition, From the Heart: Author Drawings by Rick Bartow, included 17 original works that Bartow donated to the library in 2000, most of which had not been previously exhibited in public.

Debbi Murray ’77 has retired after a long teaching career that included 12 years at St. Luke in Woodburn and 28 years at Regis St. Mary, a private Catholic school in Stayton.

Retired high school English teacher Ken Bolf ’72, ‘81 has donated to the university his collection of items from the Monmouth Institute of Creative Writing, a summer academy that took place in the 1980s and 1990s.

After working 34 years in special education, Julie Le, ’80, ‘83 retired from Hillsboro School District as a coordinator in student services in June 2015. Since retiring, she has spent time traveling with her husband and working as adjunct faculty at Pacific University and Lewis and Clark College.

Mike Castle ’80 retired this year after a 25-year career as a letter carrier with the United States Postal System and, before that, 12 years with the U.S. Air Force. He intends to spend the next several years traveling with his wife, Brenda Kay (Jackson) Castle ’80, who just retired from being a special education teacher for 14 years.

Steve McCartt ’83 was named 2018 Coach of the Year by the Washington State Forensics Association. He has been coaching speech and debate at Sedro-Woolley High School in Sedro Woolley, Wash., since the fall of 2007.

Tim Cook ’91 is now the president of Clackamas Community College.

Jim Yon ’93 was elected Linn County Sheriff in May and started the post in June.

Jenny Foster ’95 is in her first year as associate principal at Mercer Island High School in Washington.

Ryon Kaopuiki ’97 is the new vice president for enrollment and marketing at Anderson University in Indiana.

Sara Deboy ’98 is now associate director of teaching and learning in the Oregon City School District. She most recently had been principal at Lake Oswego Junior High School.

Kim Kiser ’99 is now the head softball coach at The Dalles High School. She also serves as an assistant volleyball coach there.

Amy Stewart-Mailhiot ’99 has taken the position of dean of library and learning resources for the O’Grady Library at Saint Martin’s University in Lacey, Wash.

Heath Mink ’00 has joined the mortgage lending team at Camden National Bank in Camden, Maine. Mostly recently, he’d worked at Jeanne D’Arc Credit Union, based in Lowell, Mass., where he served as a senior loan officer for four years.

Melissa Straughan ’00, ’04, a third-grade teacher in Albany, won a Presidential Teaching Award for Excellence in Mathematics and Science Teaching.

Woodburn teacher Andy Beyer ’02 was named the 2018 History Teacher of the Year by Gilder Lehrman Institute of American History in New York. Beyer teaches at the Academy of International Studies.

Bikky Shrestha ’04 is working for accounting firm BDO USA LLP and is responsible for leading audits.

Dustin Willetts ’09, ’11 has been named artistic director and conductor of the Sno-King Community Chorale in Edmonds, Wash.

Samantha Miller ’10 is the new director of marketing and brand management for Barenbrug USA in Tangent.

Vivian Reed ’10 was honored in September at the U.S. embassy in Warsaw, Poland. The reception recognized the publication her book An American in Warsaw: Selected Writings of Hugh S. Gibson, U.S. Minister to Poland.

Talia Barnes ’16 is now studying at Western University of Health Sciences College of Osteopathic Medicine of the Pacific-Northwest.

Andrew Maeda ’16 recently completed his master’s degree and now is working as a strength and conditioning coach at Illinois State University.

Kelsey Henry ’17 has been hired as the new head coach of the girls basketball team at St. Joseph Catholic High School in Ogden, Utah.

Stephanie Blair ’18 has taken a job as a staff reporter at the Creston News Advertiser in Iowa.

Nyles Nygaard ’18 hit the game-winning home run at 12:50 a.m. during the 113th annual Midnight Sun baseball game, which is played in Fairbanks, Alaska, on the summer solstice, when the sun sets for just three hours. 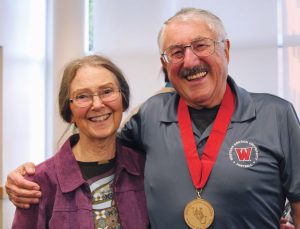 Hamersly ’64
Alumna, library namesake and 2018 Alumni Award of Excellence winner Lynn Hamersly was a dedicated WOU benefactor and inspiration to her WOU sweetheart and husband, Wayne ’62.

Verna Duncan
A longtime WOU supporter, Verna Duncan was devoted to student success and was the namesake of several significant WOU scholarships.