The Western Oregon University campus may be filled with stately brick buildings that seem as though they’ve been in place for decades—and in many cases, they have—but in truth, the 157 acres that comprise the grounds and buildings continue to evolve each year.

Last year brought the opening of the new Student Health and Counseling Center. Before that, the Richard Woodcock Education Center was unveiled. In the coming two years, the former Oregon Military Academy building will be renovated into WOU’s new Welcome Center, moving the main entrance to campus to the north end rather than the Academic Programs Support Center, located on the corner of Monmouth Avenue N. and Jackson Street.

All of these changes are dictated by WOU’s Campus Master Plan, a continually updated document that takes into account both the current use and future needs of the university. Major changes to the plan are made approximately every five years, and although many of the suggested improvements each cycle are not possible due to funding, a few projects do get the green light.

The campus community is nearing the end of another Campus Master Plan revision. The committee working on the plan includes people from all over campus—faculty, administration, staff, students and community members—as well as planning and architecture firm SRG Partnership in Portland.

Director of Facilities Services (formerly Physical Plant) Michael Smith is one of the key members of the committee, and he’s ready to move on the action items featured in the proposal.“This plan moves us more towards reality and what is likely to happen versus a theoretical idea of what we’d like to see campus as in the future,” Smith said. “This is kind of a guide. It’s getting us there. It’s here to support the strategic plan. That’s what’s driving all this.”

Three projects already are funded and moving forward: upgrading the Natural Science building, the creation of the Welcome Center and various deferred maintenance tasks. New labs and other improvements are going into Natural Sciences. The university received capital improvement funding from the state Legislature for the OMA purchase and remodel, and WOU got a portion of a larger fund divvied up to cover deferred maintenance at all seven of the state’s public universities.

The new WOU Welcome Center is expected to include the Jack Morton Memorial Lobby and departments such as Admissions, Financial Aid and Alumni Relations. The upstairs area, which currently contains military billets (think bunkhouse), will become lodging for conference attendees or camps, Smith said. The WOU Food Pantry already is operating in part of the building.

“The thought is, a lot of people come into campus on the north entrance,” Smith said. “We want to be a clear presence indicating ‘This is the beginning of WOU. This is where we start,’ and (visitors) can make their way to the rest of campus.”

The intention is for work to begin on the remodel in summer 2019, with a grand opening before fall of 2020. On the deferred maintenance punch list, Smith said, are improvements to the Instructional Technology Center, one of the oldest buildings on campus. The approximately $6 million update to the 1915 structure will include seismic upgrades, bathroom upgrades, remodeled classrooms and a new entryway.

Smith said other long-term maintenance include installing air conditioning on the third floor of Todd Hall and adding storm drains in The Grove area. Many brick buildings could use a touch-up to their mortar, and roofing projects are a constant need, he said.

One thing that is not on the Campus Master Plan is an increase in general classroom space. SRG did a thorough analysis of how and when classrooms currently are used and found that capacity is appropriate to the size of WOU’s student population. The same can be said for parking spaces. However, Smith said, these two issues will continue to be monitored because as enrollment rises, adjustments—specially to parking—will have to be made.

Even apart from the Campus Master Plan, changes are continual on campus. The former health center behind Todd Hall was remodeled in 2017 and now houses the Advising Center. This winter the Child Development Center will be moved from Todd Hall to the University Park Conference Center on the north end of campus, which previously held Army ROTC classrooms. The new location offers easier access to parents, better seismic safety and improved overall security.

Still, there are plenty of intriguing proposals contained in the Campus Master Plan. One of the first would be an alteration to New P.E. It could see the addition of 33,000 square feet, space that would be used for a new weight room, additional locker rooms, classrooms, offices and an elevator. The gym will be upgraded with new wooden floors and bleachers. The existing locker rooms also would be refurbished.

The east side of campus, specifically the area around Rice Auditorium and Smith Music Hall, is a prime opportunity for a fresh reimagining, SRG suggests. By removing the modular buildings and reworking that area, WOU could establish a “cultural center” that would  be more accessible to students and the community alike.

“The idea would be to create that kind of corridor,” Smith said. “That would be important because the students are missing out on a lot of cool activities if they think Rice is too far away.”

Smith would like to have the option to close part of Church Street in order to stage street fairs or similar events from time to time. However, that would require a change in access for large trucks, which need to be able to reach loading docks at the Werner University Center, the Physical Plant and Valsetz Dining Hall.

In fact, the area behind the WUC, where parking Lot H exists now, garners a lot of attention in the proposed Campus Master Plan. As it stands, the lot is prime real estate at the heart of campus that detracts from the walkability and circulatory flow of the grounds. Ideally, Smith said, that parking would be pushed to the edges of campus, and the lot would be turned into something more functional, such as a building or greenspace where students could gather. However, that change would be a longer-term goal, he said.

Also on the longer-term wish list: upgrades to McArthur Field and Stadium, a new use for the former College of Education building or a complete replacement, new or upgraded residence halls, and a health sciences building.

Of course, all the projects on the Campus Master Plan and the wish list are dependent on funding. At the rate of approximately two projects per fiscal biennium, many changes could be 10 or more years in the future. Still, excitement about the possibilities is high, said Eric Ridenour, senior associate at SRG.

“It was a pleasant surprise to see a lot of awareness from all campus users about the importance of having a really energetic campus,” said Ridenour. “The WOU campus has a great walkable scale, and the (proposed) plan calls for making that trait even more successful. The university’s leadership is energized and savvy, working as quickly as possible to respond to WOU’s needs with clear strategic investments.”

Smith acknowledges that even in the face of excitement about future possibilities, it’s still likely that some WOU alumni will view the advancements as bittersweet. Alumni who return for visits like to stroll around campus, pointing out places they spent time during their college careers.

“People are connected to the buildings where they had classes, the vintage ones, like Todd Hall or ITC, I think,” he said. “Those buildings will always be here.”

The proposed changes to campus will serve as both functional necessities for current students and a recruiting tool for prospective students. The close-knit feel of the WOU campus will remain, even after improvements are made, Smith predicted. In the meantime, WOU will keep pushing for state funding for capital improvements.

“There are a lot of worthwhile projects here,” Smith said. 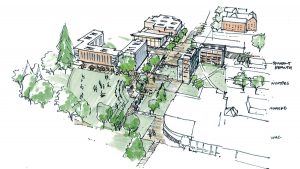 Did you come across any surprises while compiling this master plan?

It was a pleasant surprise to see a lot of awareness from all campus users about the importance of having a really energetic campus. The WOU campus has a great walkable scale, and the plan calls for making that trait even more successful with new investments in the center: new housing to meet the needs of contemporary students, an enhanced dining hall to support more options, and active gathering places in the campus core.

What project or area garnered the most discussion during feedback sessions?

Both the athletics area and the arts complex got a lot of discussion. Reinvesting in the athletics fields and the New P.E. facility will help WOU compete and support student athletes. The arts programs have been very popular but are limited by the available facilities in their ability to serve students. For example, even modest investments in Rice Auditorium to improve access and a set shop will allow it to be programmed more actively. Also, there is a real focus on student success, and the idea of a center to support students of all types to meet their goals is very exciting.

Having worked on the last plan in 2011, what was it like for you to be revisiting WOU’s future?

Since my prior work on the campus, there are many important changes. WOU is now an independent public university, different from the days of the Oregon University System. The university’s leadership is energized and savvy, working as quickly as possible to respond to the university’s needs with clear strategic investments.