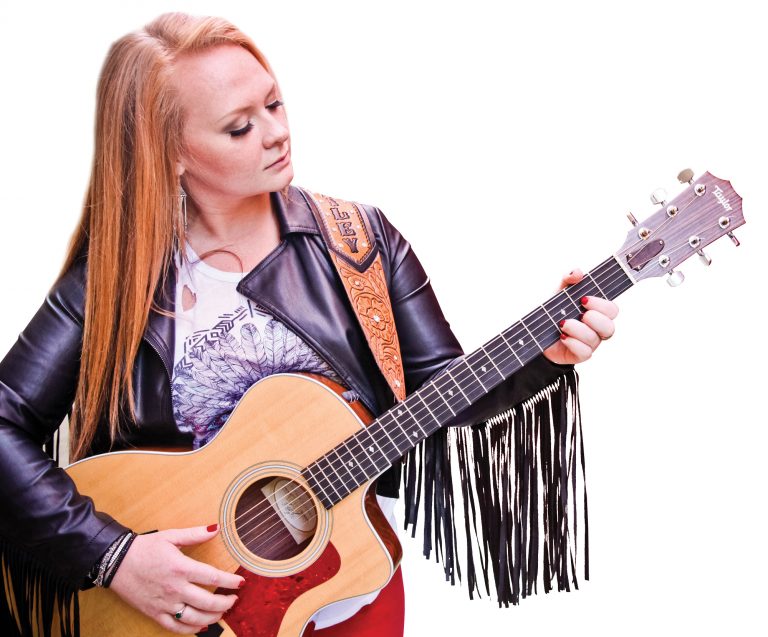 Oregon City native Hailey Verhaalen ’15 left Western Oregon University with a degree in social science, and she said the concepts she learned during her coursework have proven invaluable. But she’s not working in social science at the moment. It seems her passion for music has taken her career path in a completely different direction.

Verhaalen has been living in Nashville, Tenn., for two years, working hard and paying her dues, trying to make it big in the country music scene. “When I first came to WOU, music wasn’t necessarily my biggest priority. I had always been a songwriter and loved to play the guitar, but it was more of a hobby back then,” she said.

“I started writing songs when I was about 10. While I was attending WOU, I wrote a ton of songs and ended up recording some of them my senior year.” 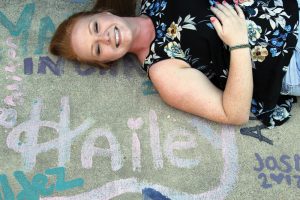 Verhaalen, like 44 percent of the WOU student body, came to WOU as a transfer student. She’d spent two years at Clackamas Community College, trying to figure out what she wanted as a career. She thought she might be a teacher. She was always fascinated by the theories of psychology and sociology.

Photo (left): Verhaalen visited campus in July, and found her name on the freshman sidewalk.

The outgoing redhead, however, continued to fine-tune her music. She was too young to go to bars, so her performance options were limited. That all changed when she was approached by Oregon-grown country singer Matt Borden while she was eating dinner at her favorite hometown restaurant. He asked her to play a few songs right then and there, and after she finished, he invited her to open for him that Friday—in Medford. She didn’t consider saying no.

“All I could think was ‘This is the biggest thing that has happened to me up until this point,’” she recalled with a laugh. “I was terrified to perform a show like that for the first time, where it was just me and my guitar for a whole 45 minutes. That was the moment I thought ‘I think I want to do stuff like this more often. This is fun.’ ”

After that opportunity, Verhaalen started lining up more gigs. Whiskey and Fire, her first EP, was recorded at Kung Fu Bakery Recordings in Portland and came out in 2014. Her senior year at WOU, she got a regular band and started doing shows on weekends. By the time she graduated, she was a fixture in Portland-area venues.

She credits her time at WOU with showing her she had the strength to survive on her own.

“WOU really broke me out of my home-body shell,” she said. “I thought I couldn’t really leave Oregon City or leave home base. Moving just an hour away made me think, ‘OK, if I can do that, what else can I do? How far can I go?’ ”

She found out in 2016, when she decided to move to Nashville, a city where thousands of singer-songwriters seek their big breaks. Most of them, like Verhaalen, are country music specialists, though indy music artists ply their trade there as well.

Since she arrived, Vehaalen has slowly built a name for herself, working hard not just on the music, but also on the business side of self-promotion. She has a website and takes full advantage of social media platforms to grow brand recognition and connect with fans. Still, the competition level is daunting.

“It’s all about making connections,” she said. “I have lots of people who know my name and come out to my shows, but there’s always someone else who has more. It’s a competition, but it’s also always your friends who are doing well. You’re never mad at anyone else’s success because it’s literally your peers.” 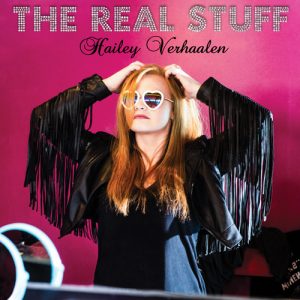 By now, Verhaalen has released three EPs. Her latest, The Real Stuff, was funded through online crowd-sourcing site Indiegogo; she said 165 people contributed $11,000 to the effort, many of whom were WOU alums and friends from her time here. The Real Stuff is the first short album she has recorded in Nashville. Though the income from the EPs serves to fund the next project, it’s not enough to support her full-time. She also works part-time as a nanny and gives guitar lessons.’

Photo (left): Her newest EP, The Real Stuff, is her third.

A few times a year, Verhaalen returns to Oregon and plays gigs throughout the Pacific Northwest. She is a regular on both large stages such as the Country Crossings Music Festival in Central Point and smaller stages like her “local watering hole” Beavercreek Saloon. Being back in her home state—and the supportive crowds that come with it—are a bright spot in her year, she said. She’s usually introduced as “Hometown Girl Hailey Verhaalen.”

“It gives me a huge boost,” she said. “Another blessing is that I have a huge, very supportive fan base here in Oregon. Wherever I go, I have friends in that area who can get the word out and bring a crowd to the show. Being from Oregon is a great advantage.”

In Nashville, she’s a little more anonymous. “Nashville is a very lovely town, but it can also be a cold-hearted town. Especially after the support I get when I’m at home. Sometimes when I play, I’m just background music. But it’s all part of paying your dues. It’s what you do.”

She views her next step as planning a few small tours around the U.S. She’s also continuing to learn the business side of the industry; fortunately, Nashville offers a lot of resources to help striving musicians. She’s realistic about where she is in the process, but she also is grateful for how far she’s come.

“What I love most about my career is having the platform to move people through melodies and lyrics that I work really hard writing,” she said. “For three and a half minutes, I have the ability to make someone feel the emotion of the song I’m singing and connect with them on a deeper level. That’s why I love what I do most!”

Verhaalen enjoys face-to-face interactions with fans and has a great knack for remembering faces. She makes a point to thank people for attending, especially those who come to multiple shows. That’s where her social science training at WOU comes in.

“I’ve used it for lots of things like crowd interactions, making connections, setlist-building for shows, and even choosing what to post and how to word it on my social media pages. It has been very helpful knowledge to apply to my career,” she said.

On the marketing front and every other part of her quest, she’s said she’s in it for the long haul.

“Moving was tough but rewarding and has taught me a lot about myself. To look back at who I was when I moved to who I am now, it’s a huge difference in the right direction. I have to continue the grind­—making connections, working hard. This isn’t a career where you can just sit back and hope that things happen. I don’t think I could ever burn out with all the cool experiences I get to have.”