Home » Sports & recreation » Student life » WOU in the news » WOU in the News: Race to Redemption: Taft grad Arce-Torres Puts Future Ahead of Past 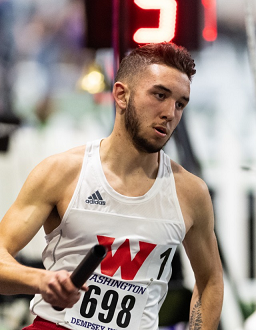 Few people understand the importance of getting from here to there the fastest than 2018 Taft High graduate Gabe Arce-Torres.

Among the state’s speediest sprinters on last spring’s Tigers track and field team, Arce-Torres was virtually unstoppable in bursting from starting block to finishing tape in Oregon’s small-school ranks.

Then, somebody threw a roadblock in his path to get from Point A to Point B in the least amount of time, abruptly derailing the senior sprint specialist’s quest to become the state’s fastest Class 3A runner.

“It’s been a roller coaster ride since high school, to say the least,” the multisport prep star said.

A pulled hamstring suffered late in his final District qualifying run last May cost Arce-Torres a chance at three league titles, a trip to State and his team a shot at the boys title. While still eager to race at historic Hayward Field in Eugene after posting preliminary qualifying times in the 100-, 200- and 400-meter dashes, he was determined ineligible to compete for State track and field supremacy under OSAA rules.

“I truly thought things would progress at a slow pace and climax like a great novel upon his graduation,” Gabe’s father and coach, Joey Arce-Torres, said. “His entire senior year of high school seemed to vanish before my eyes before I even realized what happened.”

Now a college freshman, the 18-year-old Arce-Torres will clear the hurdle of missing State when he becomes the youngest athlete in Western Oregon University history to compete in the NCAA Division II Indoor Track & Field Championships. The dominating sprinter with the indomitable spirit will run the 400-meter second leg when the Wolves seek their third straight distance medley relay title March 8-9 in Pittsburg, Kansas.

“Coming off of a really disappointing injury, I took a lot of time off during the summer in hopes of allowing my body to relax and get back to a state mentally where I was ready to put in the tremendous amount of work needed to be competitive at the college level,” he said.

Arce-Torres never lost in the 400 his senior year and qualified for the District finals in the event by more than four seconds — virtual light years by track and field standards. He shut down all comers all season, placing second just once — in the 200 to a Class 5A runner in the prestigious Prefontaine Rotary Invitational in Coos Bay.

“Gabe has used his life experiences to put himself in a position to rise up on the podium. Gabe has learned to run for himself. He now knows he — and he alone — controls his destiny.”

There was a time when pain and suffering would have been a rude awakening for the little fellow who just years earlier would score four or five goals in the first half of a youth league soccer match, then fuss over how to get the ball to his older teammates for a shot on goal in the second half.

“Coming home for winter break, I had a laundry list of about four pages of handwritten workouts for the month,” he said. “Prior to leaving, I had a few really positive meetings with my coach kind of outlining the next coming weeks and eventual outdoor season.”

Arce-Torres entered his first week of preseason training last fall still fighting the nagging pain in his hamstring, but persevered behind a robust physical therapy program at Western that kept him “somewhat functional even after the worst workouts.”

“Following my first cross country season, I felt extremely confident about the amount of training I had and was incredibly excited for the upcoming indoor season as I had never competed indoors or at the college level,” he said.

By now accustomed to setbacks, his most recent one surfaced during the first week of winter break in December when he felt a twinge in his knee roughly 25 minutes into a run.

“I just thought maybe I had stepped wrong and proceeded to run,” he said. “Within the next two minutes, I was taking off my shoes and hobbling home to grab some ice.”

The mysterious flex injury held him back from putting on his running shoes throughout the Christmas break before he burst back with two personal-best times in preparation for the distance medley relay (DMR), which features legs of 1,200, then 400, 800 and 1,600 meters.

“I couldn’t run for more than five minutes without kneeling over in excruciating pain,” he said. “After communicating with my coach, we completely scrapped the previous workout plan and put it on hold until I got back to campus.

“I knew we had a scheduled opening meet a week after we returned from break, so once I returned to campus, I spent so many hours of the day either in the training room or with my coach attempting to get me ready for the meet and back in shape from everything I had lost.”

Gabe said his injury did little to diminish his teammates’ hopes and desires, nor deter their intent, to return to the NCAA championships.

“We all knew and believed that our DMR could qualify for Nationals. The only thing we had to do was run our race and not get caught up in anything else,” he said.

Western track and field coach Mike Johnson recognized his new runner’s  desire and focus and found Arce-Torres to be a capable learner.

“Of course, he did well in the conference indoor meet for a freshman in the Open 400, but he’s proven to be an even better relay runner,” he said. “He’s kind of cagey the way he moves on the track, because in relays it’s not just staying in your lane, it’s moving among people. He has a great talent for that.”

It took a day for Gabe and his teammates to learn they had qualified for Nationals as they awaited times from around the country to be validated.

“I couldn’t stop smiling for what seemed like hours, and I’m pretty sure my neighbors were confused to hear all the jumping from excitement,” he said. “I immediately called my mom and dad as I could barely comprehend what we’d done.”

“Gabe realizes he is a part of something much bigger than himself. He knows his life is a beautiful gift, one that he takes great care of and respect for. I believe Gabe is impossible to stop and impossible not to love. He is the best part of me, and I am so humbled to be his father.”

Arce-Torres has two sisters – Kandis, the oldest, and Kamile, the starting second baseman on Taft’s last state championship sports team in 2005. Gabe’s mother, Lori, is executive director of the Lincoln City Chamber of Commerce and serves as a board member for numerous charitable organizations. Joey is campus monitor and interim assistant athletic director at Taft.

As a high school freshman, a knee injury suffered during the first 10 minutes of Gabe’s first basketball game sent chills through the crowd, unnerving his dad.

“As he was being carried off the court, I could only hold back my own fears and tears and try to convince him he would back on the court by halftime,” Joey said. “Gabe never returned to the court that day or ever again.”

“Both our hearts exploded, and we could not understand how fate had brought us to this moment,” Joey said.

Saying it was his job to see to it Gabe would play again, a surgeon at Oregon State reassured the family Gabe would return to whatever sport he desired.

On the drive to Corvallis that February morning, Gabe asked his dad if they could stop by a local bookstore. Early for his son’s surgery, Joey obliged. Gabe entered and returned with a Bible.

“Both of us worried on a daily basis whether his knee could take the punishment, but both of us trusted our faith and instinct,” Joey said. “Gabe found new strength in his will, more confidence in his conviction, and realized then this would be his secret power.”

Warned against jumping and participating in more rigorous events, Gabe concentrated on distance running and strengthening and conditioning techniques.

“His rehab was extensive. He told me he had never worked that hard in his entire life,” said Joey, who watched as Gabe exercised morning and evening of each and every day. “He trained as if he was the weakest member on his team. He listened to his coaches and led by example. He would run, play and swim as if it would be his last season ever.”

By his junior year, Gabe was a State champion in track, qualified for State in swimming and led the Tigers deep into the State playoffs in soccer as team captain. He earned Taft’s coveted “Champion of Character” award for athletics.

On his first day of school that year, a letter from the University of San Francisco was waiting in the mailbox. Nearly 50 colleges and universities inquired about his soccer and track interest. With his senior season still ahead, father and son toured schools throughout California looking for the perfect fit.

“He looked as if he was ready to conquer the world,” Joey said.

Back at his specialty, Gabe’s sprint times dropped steadily and he broke the school record in the 200-meter dash. His set his sights on the 400-meter mark and entered Districts never having lost at that distance.

“He seemed to be peaking at the right time. Everything felt right, felt like things couldn’t go wrong and then . . .” Joey said. “We embraced that day, knowing he would never compete again as a high school athlete. I believe we both felt empty for a few months. We didn’t talk much about track after that.”

With a summer job and time spent with friends before starting college, Gabe didn’t run for nearly three months following his injury and an earlier commitment to attend Western, where he found a welcoming committee of open arms.

“Our team isn’t just a team to me, it’s family,” he said. “Being a freshman surrounded more often than not by seniors and upperclassmen, I feel like part of a family here. Everyone cares for each other, and one person’s success is something we all share.

“It’s extremely positive to know there are so many people on this team who genuinely want every person to succeed. You can see that in the way we practice, the way we compete and the way we carry ourselves on and off the track.”

“Gabe’s been a great teammate and diligent in all the work he needs to do to get faster,” Johnson said. “We cut back on the volume of work a little bit, but added some flexibility and strength work to make him more stable, so he’s yet to see a full training load and is going only 80 to 85 percent.

“But in racing that doesn’t always hurt you. He still has a large room for improvement, but he’s pretty fresh and eager to race, so good things lie ahead.”

“Gabe knows how to win and not take it for granted.” Joey said. “He understands hard work doesn’t always guarantee success, but it always puts you within striking distance.”

This story was published in the Lincoln City Oregon News and written by Jim Fossum.